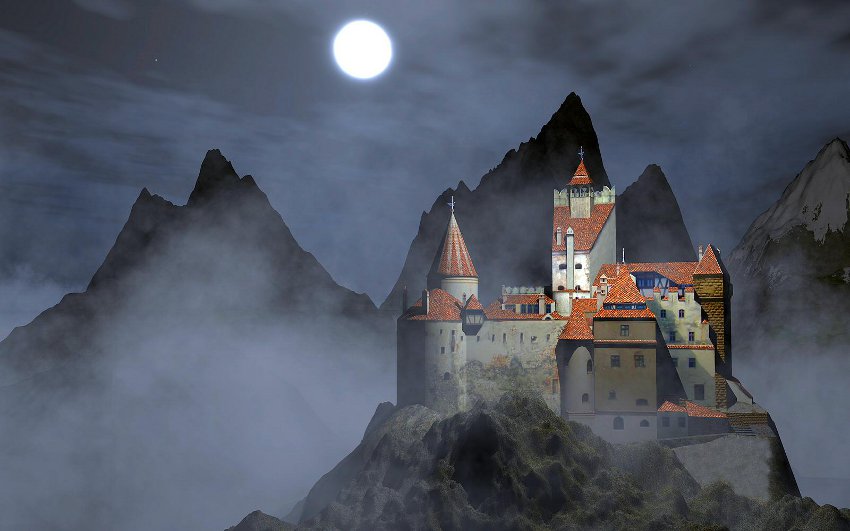 Found at bran-castle.com – Image credit not given

“Mommy, why are we staying up so late?” twelve-year-old Ileana sat anxiously on the edge of her mother’s bed while Queen Marie of Romania patted her hand.

“I want you to meet someone, but he only comes late at night.” She made her smile look comforting, but she too was nervous, and in her case, with good reason.

The door to the Queen’s grand bedroom in her Bran Castle retreat slowly creaked open. The servants were forbidden to come unbidden at this hour, so it could only be one man.

“You are welcome to enter, Vlad.”

He was dressed in black, though the white of his shirt showed through the cloak’s dark collar.

“Thank you, my Queen. Is this the little Princess?”

Ileana stood and bowed. “It is good sir. How may I address you?”

A moment of uncharacteristic compassion glimmered in the Impaler’s eyes as he whispered, “Father.”

I wrote this for the What Pegman Saw writing challenge. The idea is to take a Google Maps image/location and use it as a prompt for crafting a piece of flash fiction no more than 150 words long. My word count is 148.

Today, the Pegman takes us to Bran Castle, Romania. I looked it up and found it has a tangential association to the Dracula legend, although it’s doubtful author Bram Stoker knew of its existence when he penned his famous novel.

That said, I dipped into the histories of Princess Ileana of Romania and her mother Queen Marie, who indeed used the castle as her personal retreat.

Ileana was born in 1909, and although it was alleged that she was really the child of Marie’s lover Prince Barbu Stirbey, Marie’s husband, King Ferdinand I claimed paternity. Here, I’m suggesting another father entirely.

Can a vampire, a member of the undead, impregnate a living woman? Probably not if you think of a vampire as an animated corpse with no living biology (in spite of the Twilight movie series), but I recall when Marvel Comics ran their Dracula title in the 1970s, in one issue, they did have Dracula on a throne seated beside his living Queen, who was enormously pregnant, so some have suggested the possibility.

And I suppose if a demonic Incubus can have “relations” with a woman, so can a vampire.

17 thoughts on “The Castle’s Secrets”