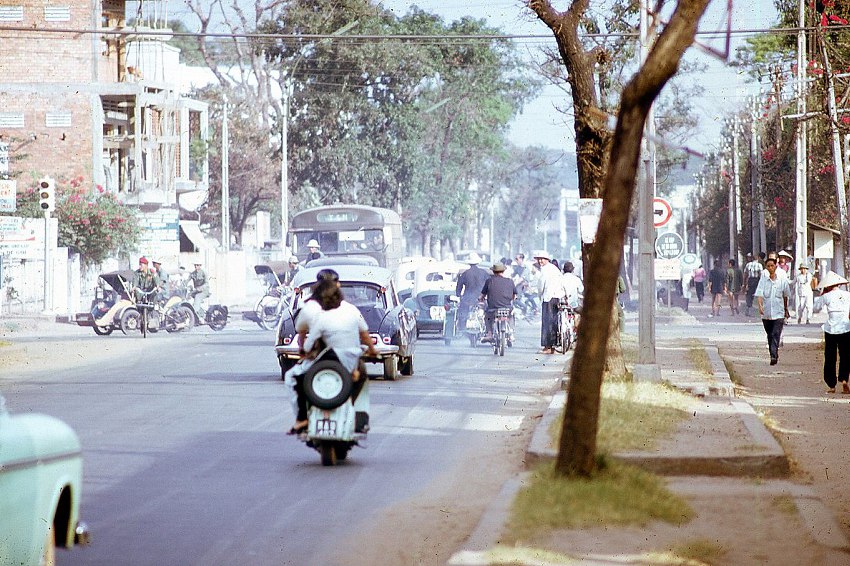 The video footage was grainy, but Taylor recognized them easily.

“You’re worth every penny I paid you, Tran. Now blow. I’ll watch the rest alone.” The Vietnamese photojournalist left the darkened hotel room without a word. He moonlighted at this sort of work, taking photos and video of unsuspecting couples, and since he’d already been paid, he was satisfied to go home to his wife and children.

Taylor kept watching the film. The cheap 8mm projector rattled like the engine of his first car, a beat up Chevy Impala, but after weeks in the jungle constantly exposed to the sound of automatic weapons fire and artillery, the military intelligence officer blithely tuned it out.

Tran had followed the couple to every tourist attraction in Saigon from the Ben Thanh market to Notre Dame Cathedral. “He really showed you all the hot spots, sweetheart.”

His target stopped to buy her a souvenir painting of some exotic flowers from a street vendor, then they had lunch at a small sidewalk eatery. On their way back to her place, they walked past women praying at the Ong Ba Chieu temple.

“Praying for peace. That’ll be the day.” Taylor snorted. “Peace will only come to Vietnam when we kill every last Commie this side of China.”

“There they go. Now it’s time to really strut your stuff, Linh.”

The image skipped at the point where Tran had spliced the two segments of film together. Linh would have entertained her guest with drinks, giving the photographer time to slip in the back and set up the camera behind her bedroom’s two-way mirror.

For the next twenty minutes, Taylor watched the pair perform several creative sex acts before finally reaching the culmination of their day together.

“Linh Le Hoang, you are terrific. You gave me everything I needed in spades.”

He got up and turned on the light, then stopped the projector and rewound the film. Picking up the phone’s receiver, he dialed a number only a dozen people in the world knew.

“It’s me. Yeah, I’ve got it. Quality stuff. Believe me, you show this to that bastard, threaten to make it public, and he’ll tell you anything you want to know.”

He listened for a moment and then said, “Yes sir. I’ll have it in your hands within the hour. Thank you.” He hung up the phone, took the reel off the machine and slipped it into his inside jacket pocket next to his holstered Beretta 70.

“You bastard. The name General Le Van Dang will be the dictionary definition for traitor when I’m through with you. Your own soldiers would shoot you if they ever found out you’re secretly working for the North. Too bad it took so long to arrange your affair with the best call girl in South Vietnam. Now you’ll give us all the dope on how to bring down the Iron Triangle.”

Taylor turned off the lights and locked the room behind him. He walked out of the low life dive and stepped into the night air in Cu Chi feeling victorious.

I wrote this for First Line Friday hosted at Mindlovemisery’s Menagerie. The idea is to take the sentence provided and use it as the first line of a poem, short story, or other creative work.

Grainy video footage reminded me of old video. The 1960s popped into my head because of the 1966 film Blow-Up, but I have no idea what made me think of Saigon (now called Ho Chi Minh City). I found a photograph of a 1967 Saigon street scene (posted above) at Wikipedia and took off from there.

I looked up 1967 in the Vietnam War, which led me to research the Iron Triangle.

To get Taylor’s handgun for the right time period, I looked up vintage pistols, but the bonus was finding a slideshow of Saigon street scenes from 1967. I used several in describing Linh and Dang’s outing.

All of the person names I used are fictitious. Cu Chi is a suburb of Saigon (Ho Chi Minh City).