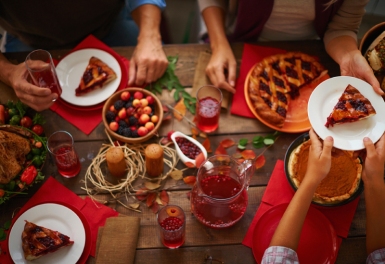 It’s the day after Thanksgiving and I’m exhausted. The holidays wipe me out, especially when I have to spend them with family.

I really wasn’t looking forward to that flight from Chicago to Oakland. Couldn’t get a direct one of course since I waited until the last minute, so the whole trip took nearly seven hours.

I really hoped Mom would have just accepted my excuse that I had too much work to do to take the time off, but she knows how to get her way. She’s always known how to manipulate me. She uses guilt, that’s a favorite. What about my ailing father? What about my sister and her obnoxious husband who never get to see me? What about all the snotty-nosed nieces and nephews who miss their Uncle Jerry.

I hear other people actually enjoy visiting their families. I can’t imagine what that’s like. The nagging Mom. The disapproving Dad who doesn’t think advanced game design is a real job. My realtor brother-in-law who is always bragging about how he’s the number one seller in his region. Older Sis who thinks I ought to dote on her three miserable, selfish brats who she thinks are perfect angels. Uncle Jerry, who I’m named after, arriving drunk at ten in the morning and who burns through half my parents’ liquor cabinet in just six hours.

I hate them all. They’re a total emotional drain. Every second of every hour I have to spend with them is worse than burning in hell for eternity or having my balls electrocuted for hours by a sadistic lover.

It’s the day after Thanksgiving and I’m exhausted, but it’s also a heck of a lot quieter. I really don’t mind the roommates, at least I’m not related to them, and they’re actually a little impressed with me, or a little intimidated.

My family forgot I still had a few of my sketchy friends living in the East Bay including Darrell, the so-called “gun nut”. I arrived a day earlier than expected and looked Darrell up. He was only too glad to show me his collection, especially the illegal full-auto rifles and all the beautiful ammo that goes with them.

He was only too happy to show me his expertise, to guide me through the process of how to load and reload each one, how to fire, how to do the maximum amount of damage in the minimum amount of time.

Darrell was my first victim, of course. I knew he wouldn’t give me what I wanted so I had to kill him and take.

Most people when invited to the family Thanksgiving dinner, are expected to bring over a salad, a side-dish, even a bottle of wine. I brought a CMMG MK4 SBR 9 mm with three extra magazines. Expensive little number according to the late Darrell but it really got the job done.

I’ll never have to attend an excruciatingly painful family holiday dinner again. It’s a lot more peaceful here in jail. Sure, I haven’t even been arraigned yet, and I’ve heard “the big house” is hell on Earth, but anyone who says that never had to put up with my family. San Quentin will seem like paradise compared to what my family’s put me through.