My two sons, my grandson, and I went to see the Star Wars movie Rogue One last night. We had to slog through snow-covered streets and icy parking lots, but we made it to the theater in one piece.

I’ve been anticipating this film for quite some time, and have heard that it’s one of the best, if not the best Star Wars films ever.

I enjoyed last year’s Star Wars: The Force Awakens very much, but after repeated viewings, came to realize it was just the first three Star Wars films rehashed. J.J. Abrams can’t seem to produce original content for either the Star Wars or Star Trek fanchises.

But Rogue One had a different director and an interesting premise, so I had high hopes.

I was disappointed, but maybe that was just because the movie had been massively hyped.

I won’t be able to write this review without some spoilers, so if you want to be completely surprised when you see the film for the first time, stop reading now.

First of all, it was not better than Star Wars (1977), The Empire Strikes Back (1980), or Return of the Jedi (1983). I don’t think any subsequent Star Wars themed movie will be, in part because Lucas no longer has creative control (although his creative control on the three prequels didn’t produce great films either).

For a large part of the movie, I felt it didn’t communicate “Star Wars-ness,” that sense that this was intrinsically part of the Star Wars universe, as opposed to a movie that used Star Wars terminology but otherwise was just another science fiction/fantasy adventure movie.

My biggest beef was Darth Vadar. I thought if any character could take me back to the sense of wonder I’d felt watching Star Wars in the theater in 1977 in San Francisco, it would he Vadar.

I was wrong. In fact, it might have been better if they’d left him out entirely, except that the plot required he make an appearence.

His costume was wrong. You’d think the studio could have hired someone to duplicate the original Vadar costume to the proverbial “T” but that didn’t happen.

The events in Rogue One are supposed to occur days and hours before those of the original Star Wars movie, so there should have been zero visible discrepency between the Rogue One Vadar and the Star Wars Vadar.

Not only was there visible dissonance, but his dialogue was totally off (yes, it was the voice of James Earl Jones, but the words weren’t Vadar’s).

At one point, Vadar is force choking another baddie, Director Orson Krennic (played by Ben Mendelsohn). Then he stopped and quipped to Krennic, “Don’t choke on your ambitions.”

Vadar doesn’t make jokes. The “real” Vadar would have issued a terrifying threat that would have sent chills up my spine. Whoever wrote Vadar’s dialogue didn’t understand the character at all.

Another thing that bothered me was the Rebel leaders. When they heard about the Death Star for the first time, half of them wanted to stop the rebellion, even though that would give the Empire an unopposed shot at ruling the Galaxy. What a bunch of whiners.

Only thanks to pluckly and oppositional Jyn Erso (Felicity Jones), Cassian Andor (Diego Luna) and a collection of galactic misfits, were the plans for the Death Star retrieved at all, and in the end, they still needed a last minute save by the Rebel fleet to pull it off.

The characters were all likeable, although Chirrut Îmwe (Donnie Yen) continually praying “I’m one with the Force, and the Force is with me.” got annoying fast.

I was particularly fond of the captured and reprogrammed Imperial droid K-2SO (brilliantly played by Alan Tudyk) who absolutely had no verbal filter, but who did have a cutting sarcasm. He was both the comedy relief and the hero on more than one occasion.

The film tended to get bogged down toward the middle and it seemed as if “the team” were just running around in circles getting nothing accomplished.

It also seemed that no matter how powerful Imperial strongholds were, the Rebels could attack any of them with near impunity, even heavily fortified Scarif where the Imperial archives containing the Death Star plans resided.

And of course, the climax is a massive space battle (Star Wars, Return of the Jedi, The Force Awakens) paralleled by a battle on the ground. The Star Wars franchise needs to add a bit of variety as to how the events in a film can be tied up (like in The Empire Strikes Back).

It was kind of impressive how old footage and CGI could recreate a number of characters including Govenor Tarkin (originally played by the late Peter Cushing), and even a young Princess Leia, however especially for the Leia character (Ingvild Deila), she had the appearence of a plastic doll. I knew that this represents the best CGI technology has to offer, and I know they needed to reproduce a number of characters who had appeared in the original Star Wars film almost forty years ago, but it was bothersome. 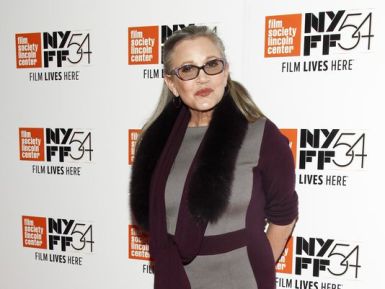 It was an interesting concept using the events described in the original Star Wars screen crawl as the basis for an entire film (how did Leia get her hands on those plans in the first place?), but what could have been wonderful ended up, for me anyway, being just “okay.”

I don’t suppose any of us can think of Star Wars right now without feeling concern for actress Carrie Fisher (Princess Leia) who recently suffered a heart attack and as of this writing is currently hospitalized. All my hopes and prayers for her swift and complete recovery.