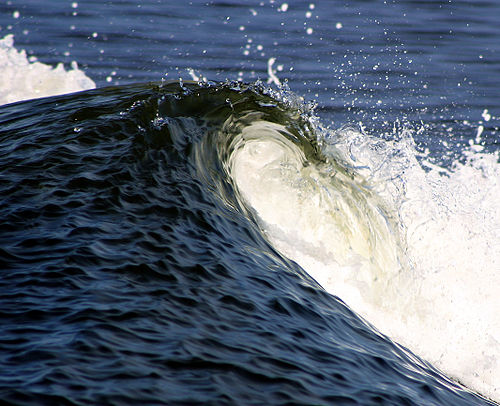 “Damn!” It was the only word Martin Fields could get out before falling into the Pacific Ocean near the equator, north of what would one day be called Papua New Guinea, and thousands of years before he was born.

As his head resurfaced above the equatorial waters, he heard her say, “Try again, Martin.”

Before Martin could try anything, he could feel changes in the circuits of his Temporal Jump Suit and he was on dry land again. More specifically it was the vast Australian Outback. His virtual display told him he had only moved geographically. Chronologically, he was still walking the Earth several centuries before the birth of Christ.

“What the hell!” He instantly went from treading water to collapsing in hot, dry dust. It clung to his still soaked suit, though fortunately, the mysterious technology that allowed it to travel through time was immune.

“I told you to be careful when setting your location. Time travel isn’t just time travel, it’s space travel. Move backward in time a thousand years but don’t take the Earth’s position in the Solar System into account, or the Solar System’s location in the galaxy for that matter, and you’ll be dead before you can return to the present.”

Even dripping wet and exceptionally irritated as he was, Martin couldn’t help but notice just how beautiful Isis was. She was taller than average height, had raven-dark flowing hair, appeared Asian to some degree, and wore a full-length dress that seemed to be a cross between silk cloth and some sort of liquid.

“I thought you said the suit compensated for all of that automatically.” He was sitting up, letting the warm summer sun begin to dry him.

“True, but you neglected to refine your spacial settings, so instead of materializing in Australia, you did so ten feet above the Pacific, though it was your good fortune to arrive within a few kilometers of the equator.”

“Give me a break. This is my first live trial outside the testing environment.” Martin had been selected to become a time traveler by the…beings Isis represented. She was one of them, not human, but he had no idea what they looked like. Isis always appeared to him in her current form.

He knew they were metadimensional, meaning they existed outside of any conventional space-time continuum or quantum reality. He also knew that they were the guardians of all existence, the safety valve that kept all reality from abruptly vanishing, although what that all meant was a total mystery to him.

They needed a human agent (as far as he knew, he was the only one) to patrol his particular timestream and correct temporal anomalies. But first he had to be trained in the use of the Temporal Jump Suit, the technology that would let him travel through time.

“This is why I’m accompanying you. When you complete your training, you will be given assignments but otherwise be totally autonomous, except perhaps for rare occasions. For this, you are being well compensated, so a brief swim in the ocean is no great cause for alarm. Now please stand and try again. This time, go forward 500 years and move to the future site of Sydney.”

He complied and she was right. He didn’t know how, but every week, a large deposit was made to his bank account. If this kept up, in just a few years, he’d be set for life. He was only twenty-three, unmarried, and had been pursuing an unspectacular career as a junior copy editor for a small publishing company before meeting Isis (presumably not her real name, if she even had a name, and if she were even a she).

Okay, here goes nothing.” Martin reset the controls and activated the suit.

This time he fell into the ocean a kilometer east of the Great Barrier Reef. He assumed Isis and her kind possessed nothing so human as a sense of humor. Today, she was training him to tolerate frustration in encountering the unexpected. Only his pride would be hurt, and that would be temporary.

I took the characters from today’s flash fiction challenge and adapted them to the first of a series of seven short stories. I’m basing the series on the book titles for The Rabbi Small Mystery Series written by the late Harry Kemelman. Since this is a Wednesday, the title is “On Wednesday the Time Traveler Got Wet”. I think I read one or two books from the Rabbi Small series, but that was decades ago, and I don’t remember anything about it.

I just want to see what I can create based on a title alone. How did I do?

The next part of this series is On Thursday the Time Traveler Walked Out.

3 thoughts on “On Wednesday the Time Traveler Got Wet”