The Fourteenth Story in the Adventures of the Ambrosial Dragon: A Children’s Fantasy Series

Landon was practicing using his invisible cloak, but without Buddy’s permission. It was Saturday and he was at the playground. While his Grandpa was sitting on a bench reading a book, Landon slyly pulled the cloak out of his backpack, walked around the edge of the school, and put it on.

Instantly he vanished. He thought maybe he could play some pranks on his friends, but as he continued to wear the cloak, the world around him started to look strange and distorted. It was almost as if all of the kids playing on the swings and slides and other equipment weren’t real.

But if they weren’t real, what was?

“Tarmreiboth!” It was the voice of the Dark Wizard from Setioval, a world always in shadow at the edge of the domain of the Shadow Dragons, Buddy’s natural enemies.

The real world around him started to fade. It had to be the cloak. There was so much about it Buddy hadn’t taught him yet.

Landon ran back toward his backpack, but the world had changed so much, he couldn’t find it. Finally out of desperation, he tore off the cloak.

Instantly, the world went back to normal. No one had been looking right at him when he returned to visibility, and he saw he was only a few feet from where he’d put his backpack. He folded the cloak up and put it away.

“Hey Landon, don’t you want to play?” Charlie, one of his friends, called out to him.

“Sure, I’ll be right there.” Landon had to put on a good show so no one would suspect, but after what just happened to him, he really didn’t feel like playing.

Saturday evening in his bedroom. The living stuffed animals watched intently as Buddy the Ambrosial Dragon gave Landon his first official lesson with the cloak.

“To Buddy you listen.”

“Put on the cloak but concentrate on your necklace.”

Landon had received a mysterious miniature railroad lantern as a gift from Buddy. It lit up when it sensed mystic danger, and had the power to intensify any spell Landon wove.

“What happens if I don’t focus on it?”

“Invisible doesn’t mean just not see. It means not be real. Leads you into other worlds. You not be seen because you not be here.”

Landon remembered how is baby sister Dani got lost in the World of the Invisibles just because she used the cloak a few times. Even Buddy had learned more about the cloak since then.

The boy apprentice was tempted to tell his master about the experience he had at the playground earlier, how he had heard the Dark Wizard’s voice while wearing the cloak. He decided not to. He didn’t want to get into trouble. Buddy might take the cloak away from him.

Landon put on the cloak and immediately started to focus on the lantern. It happened just like Buddy said. With the lantern in the forefront of his thoughts, Landon didn’t experience the world becoming unreal. He listened, but Buddy’s voice was the only one he heard.

He knew what the dragon meant. He didn’t want Landon to play pranks on Daddy or Grandpa. Too bad. It would have been fun.

He opened his bedroom door and creeped down the hall. Daddy was making supper while Grandpa was working on the computer. In spite of what Buddy said, Landon quietly went into the study room, and when Grandpa wasn’t looking, the boy moved the computer’s mouse.

Grandpa went to reach for it, but it wasn’t where he’d left it.

Landon had to stifle his laugh. He stepped back and the floorboard creaked.

Grandpa looked under the desk. Sometimes, Landon liked to sneak into the computer room and hide under Grandpa’s desktop. This time the older man didn’t see his grandson.

“Whatever.” Grandpa went back to work. Landon decided not to press his luck and tiptoed back into the hallway. He had to press himself against the wall as Daddy abruptly came out of the kitchen. He was headed into the garage to get something from the outside fridge.

As Landon opened his bedroom door, the world started to fade a bit. He’d forgotten to concentrate on the lantern. He thought hard about it again and the world returned to normal.

“Off with the cloak, Landon.”

The dragon had seen the door open and close and knew Landon had returned…or did he have some other method of sensing the boy?

Landon took off the cloak and instantly reappeared, startling Baby and the other living stuffed animals. They all gathered around him and started hugging him as if he’d been gone a week.

“Away, stuffed animals. Teach Landon I will.”

They all returned obediently to Landon’s bed and waited.

Buddy continued to teach Landon how to use the cloak for the maximum benefit of invisibility without losing control and losing his way.

Sunday afternoon, Landon always took a shower. Afterwards, he got dressed and then usually looked at YouTube videos on Grandpa’s laptop.

This time though, he decided to practice more with the invisibility cloak. Daddy was giving Dani a bath, and Grandpa had gone to the library to return some books, and get some others he’d put on hold.

Buddy was high in the sky, too high for people to see from the ground, exercising his wings and feeling the freedom of flight.

Landon put on the cloak but there was one thing he forgot. After his shower, when he got dressed, he forgot to put the lantern necklace back on. He tried concentrating on it, but it felt so far away.

Landon tried taking the cloak off but the clasp at his neck was stuck. He couldn’t break it and he couldn’t rip the cloak’s material to tear it off that way.

The world around him shimmered.

“Help. Help, Daddy!” Landon could just barely hear his own voice. Not only was he invisible, he was vanishing. It wasn’t the real world that was disappearing, it was Landon.

Setioval. Landon remembered it from the last time he was here.

Strangely, he was still invisible. Could Tarmreiboth see him, or did this occurrence  surprise the Wizard?

The Wizard was at the front gate of his dark castle. Landon was standing just ten feet in front of him. But the magician couldn’t see him at all, even though he could see the invisible boy in his own world.

“I said show yourself, Landon. There’s no escape for you this time.”

The Mage held up his ebony scepter and spoke a spell in the Master’s language. Landon felt his skin crawl as if a thousand ants were all over him. A dark purple glow surrounded him.

“I see you now. You have no where to go.” Tarmreiboth pointed his rod at Landon.

Landon concentrated on his lantern which was worlds away on the bathroom counter. Amazingly, he could feel it, he could envision it, and as he focused his thoughts even more, the purple glow vanished and the tingling sensation disappeared.

The lantern must be more powerful than Buddy had told him.

The Wizard said something in a language Landon didn’t understand, and his shadow demons came out of the castle in hoards. They swirled all around the boy, but somehow kept missing exactly where he was standing. But while shadow demons aren’t particularly smart, the same can’t be said for magicians.

“I can see a gap where my demons cannot reach. I think that’s where you are standing, boy.”

As Landon continued to concentrate on the lantern, he came into contact with something else.

It was Buddy! Landon could envision him holding the lantern necklace, focusing his magic on it…and on him.

“Off, take cloak off, Landon.”

“But then he’ll see me, Buddy. I’m barely keeping him away from me as it is.”

Landon looked up and saw Tarmreiboth walking straight toward him, holding his scepter in front of him. Another mystic blast from that pole would destroy the cloak’s ability to conceal him.

“Trust me you should, Landon. Protect you I will. Remove cloak. Do it now.”

In all the time Landon had known Buddy, the dragon hadn’t given him any reason not to trust him, so the child continued to do so. This time, the clasp wasn’t stuck when he released it, and he removed the invisibility cloak from his shoulders.

Instantly, Landon was visible and back in his bedroom. Buddy was next to him holding the lantern necklace.

“What? Why?” Landon was very confused.

“Without necklace, cloak took you places, places Dark Wizard can go. What held you in Setioval was cloak. Taking cloak off made you visible and stopped spell keeping you in Wizard’s realm.

Landon was so relieved to be away from Tarmreiboth, he dropped the cloak and gave Buddy a big hug. All of the living stuffed animals were touched and joined in on a group hug with the boy and the dragon.

“Promise me, Landon, no using the cloak unless I am with you, okey dokey?”

Buddy was slow in teaching Landon more about how to use the cloak because of the incredible power it contained. Landon would need to learn more about the lantern before he could return to practicing invisibility.

It was a Friday and Landon was happy that the school week was over. He went into his bedroom to get rid of his backpack and saw something strange.

All of the living stuffed animals were at the foot of the bed looking suspiciously at an object resting on Landon’s pillows. 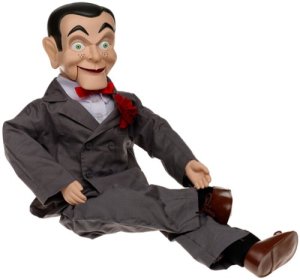 The character “Slappy” from the Goosebumps books | found at Amazon.com

Just then, Grandpa peeked into Landon’s room. “Do you like it? When I was a boy, there were all kinds of ventriloquists who used their talents to make dummies and puppets come alive. It was really fun.

“I saw this one in the window of a pawn shop for a really good price and couldn’t resist. He even came with a “How to Become a Ventriloquist” instruction book. The dummy’s name is Slappy. Do you like him?”

Landon regarded Slappy as if he had seen the dummy somewhere before, somewhere sinister, and it was as if Slappy was looking back at Landon.

This is a sequel to the previous story in this series I’m writing for my grandson called The Invisibles. Buddy first appeared last August in the tale The Day a Dragon Came to Live with Us. At the end of that story, there’s a link to the next, and so on and so on, just in case you want to read the whole series from the beginning.

One thought on “Return to the Dark Realm”