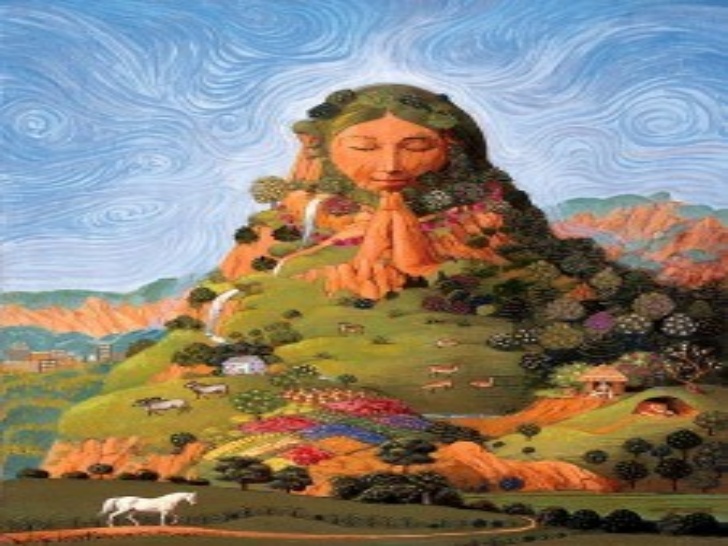 Depiction of the goddess Pachamama

Everyone thought Rich and Francesia were crazy to spend their honeymoon hiking in a remote part of the Andes in Bolivia, but to them it was a thrilling prospect, that is until they got lost. The travel agent in Cochabamba strongly urged them to hire a guide, but the two had hiked some of the most remote areas of the Earth and felt they were experienced enough to go it alone.

Besides, it was their honeymoon and well…they didn’t want the company.

It was night again. They had rationed their food but it was almost gone. Rich gave the last of his water to Francesia an hour ago.

“We told the agent our route. When we’re overdue, they’ll send out search parties.”

They were huddled together under a outcropping in the rock, their only shelter. The wind had picked up frustrating their efforts to build a fire. They had zipped their two sleeping bags together and wrapped them around their bodies to keep from freezing.

“Rich, we don’t know where we are. We could be miles from where anyone would look for us.”

“We’ll make it Francesia. Maybe your great-grandma’s ghost will bring us luck.”

“What? You mean because she was Bolivian?”

“How about those stories she told you about Pachamama when you were little?” He was trying to make her smile, to think about happy times.

“You’re nuts.” She was chuckling in spite of her fear.

He held his wife tighter. “We’ll make it. Somehow we’ll get through this, Fran. You’ll see.”

She wanted to believe him but she knew better. He’d tell her everything was going to be okay even if his pants were on fire. He always wanted to take care of her. Sometimes she let him, but this time, she knew they’d both have to face reality.

It was dark, really dark. The kind of darkness everyone they knew in Orange County probably never experienced in their lives. No lights at all but the stars and if they hadn’t been so cold and scared, the view would have been magnificent. The Milky Way wasn’t just a hint, it was panoramic glory, the splendor of the heavens.

It had been magnificent up until they had gotten turned around, taken the wrong trail at some unknown point in their journey. Now the stars were mute witnesses to their slow and steady extinction. They had such hopes and dreams of a home, a family. Now they were two more victims of human folly. Would their bones ever be found?

The woman was speaking Spanish. Francesia realized she’d fallen asleep. The eastern horizon gave off the first hint of the coming dawn.

“What? Who?” His eyelids fluttered and then he focused his vision on the newcomer.

She looked like one of the indigenous people who they’d met during their long climb, but she hardly seemed dressed for the weather. She had an odd odor, something like potatoes and…coca leaves?

Rich thought he must still be dreaming.

“Children, you must come with me. I will help you.”

Her hair was black, her eyes big, brown, and deep, as if they were pools, as if you could fall into them and drown. She wore no make up, no of course not, but her lips were large, luscious, what Rich called “kissable,” except this woman looked so imposing yet at the same time loving. Her breasts were large as if she was the mother who could feed an endless brood of young. She had a presence. They both implicitly trusted her.

The newlyweds quickly stowed their gear in their backpacks as they watched her make her way down the trail, back in the direction they came from last night.

Somewhere along the line, Rich had picked up a limp. Francesia did her best to support him in spite of the height and weight difference. They walked for hours. The sun was almost overhead when they reached a wide point in the trail. There was a fire burning and provisions of food and water.

The woman waved her arm at the fire. “Wait here. Rest. Eat. They will come for you soon.”

“Thank you,” Francesia said as she eased Rich down to the ground. “Who are you?”

“Your great-grandmother knew me, Francesia. Now you will know me, too.”

The young woman turned momentarily to see how her husband was doing and when she looked back, the stranger was gone.

“Pachamama?” She was whispering in awe.

Francesia turned to see what Rich was looking at. It was a small collection of stones stacked one upon the other. She’d seen drawings of them before, the drawings great-grandmother made for her. “It’s a cairn, a shrine…a shrine to Pachamama.” She closed her eyes, tears streaming down her cheeks. “Thank you grandmama. Thank you for sending her, for saving us.”

The rescue party found them a few hours later.

A little while ago I wrote a story involving a Cairn which is a set of stacked stones that has particular significance in many different cultures.

I decided to learn more about cairns since my wee bit of flash fiction didn’t allow me to say much about them and found out that among the indigenous people in the Andes since pre-Collumbian times, they were used to mark trails and the Quechuan people used them as religious shrines for the earth goddess Pachamama. You can click the links I’ve provided to learn more about her.

After writing some particularly grim Halloween tales, I decided to create something with a happy ending.