Early photo of the Eden Hotel, Argentina, circa 1912.

It was dark but they still had to be careful. Ever since the anti-Fascists took over the country, Germans were being rounded up, incarcerated, and brutally interrogated for information related to the Nazis.

The woman looked to be thirty to thirty-five years old and about six months pregnant which was obvious even through the overcoat she was wearing. She and a man stood by the car watching the Hotel Eden in the distance. Once it had been a sanctuary for high-ranking party members and their friends. Albert Einstein had once stayed there as did many other notables, dignitaries, and celebrities.

But those days were over.

“Indeed, Senora. But those days are not gone forever. Your husband’s legacy will live on in a future generation.”

She didn’t take her eyes off the Hotel down the road. “He should be back by now, don’t you think?”

They heard a rustling in the underbrush to their left and turned. A ten-year-old boy emerged from the shadows holding something.

“It was right where the Senora said it would be, Senor Juan.” The boy was smiling, enthusiastic. He had never been in the presence of such greatness before.

“You did well, Adolfo. Now left me have it.” Juan held out his hand and took the metal strong box from the child.

“I heard that he visited here once himself. He was in disguise so no one knew. I also heard Herr Goebbels and Herr Eichmann also were guests. It must have been glorious.”

Juan ignored Adolfo’s prattling as he examined the object. Nazi Eagle engraved on the top. Expensive combination lock. If the Senora could open it, then it was the genuine article. He handed it over to the German woman. “Here, Senora. Your husband’s legacy and your child’s future.”

“Thank you, Juan,” then she nodded at the boy, “and you Adolfo.”

“My great pleasure to serve you, Senora.” He hadn’t stopped grinning since he first saw her.

She smiled bitterly at the boy who had been named for her husband.

“It is time to go. We have a safe house for you.” Juan escorted the woman to the passenger’s side of the vehicle, helped her in, and then closed the door. He slipped behind the steering wheel as the boy got in back. Juan would drop him off at the village before taking the Senora to a location only known to five other loyalists. 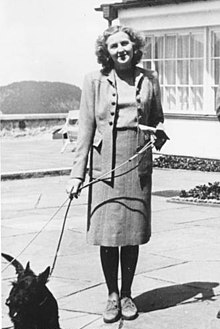 “You and your child will lack for nothing, Senora. The hidden wealth of the Reich is at your disposal.” He put the car in gear, executed a quick U-turn, and hastily drove back the way they’d come.

She looked down at the box in her lap and then caressed her belly. She thought she felt him kick inside of her. “Thank you, Juan. You are very kind. It was Adolf’s last wish that I escape to Argentina and carry on his work. I will raise his unborn son to follow in his footsteps and to achieve even greater accomplishments. The Fourth Reich will rise again out of the ashes of the Third. This time however, like what the Americans have just achieved, we too will have the bomb, and with it, the son of Adolf Hitler will capture the world.”

The battered aging automobile disappeared into the night carrying an even darker destiny.

As you probably have guessed, this is an expanded version of the Pegman prompted piece of flash fiction I posted this morning. I was unhappy that I had to edit it down so much, so I rewrote it to include more details. I could have opened it up even more, but this seems to be just about right for what I’m trying to accomplish. Enjoy.

Oh, if you need more background on the Eden Hotel or other story details, I placed the relevant links in the original flash fiction tale. However, I did find some additional information at Visual Squirrels.