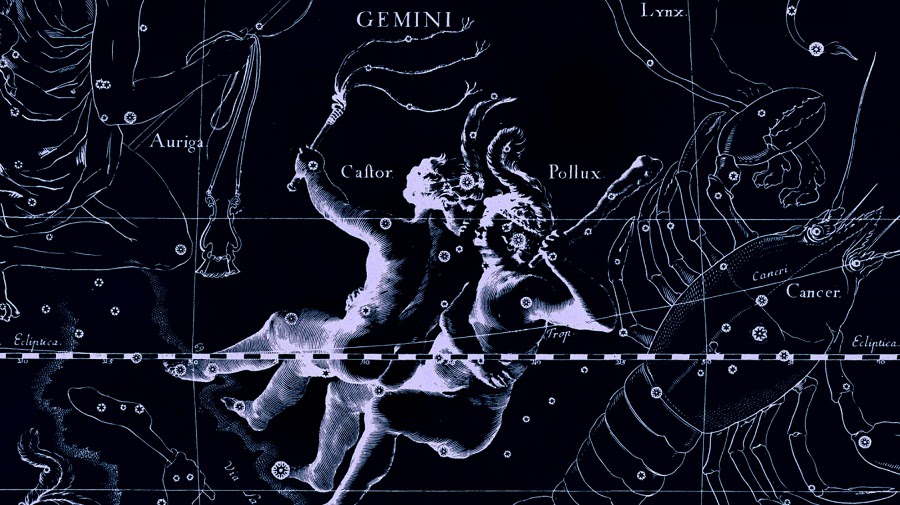 A representation of the constellation Gemini

“Who are you?” Kas hated that the first thought that popped into his head when he answered the door had to do with looking into a mirror.

“May I come in?” The man looked exactly like Kas except for the clothes which were a hell of a lot more expensive than he could possibly afford.

“What do you want?” Kas had just moved from Newport News, Virginia to Seattle a month ago for a new job and he knew almost no one except a few people at work. He expected to spend Christmas alone but now he had to face it with his doppelgänger.

“My name is Pol. I promise I mean you no harm. I’ll only stay a minute, but I have some presents for you. May I come in please?”

Kas looked down at Pol’s gloved hands and saw he was holding two small wrapped boxes each with a tiny red bow on top.

“Sure, why not?” He stepped aside so his immaculately dressed and groomed double could enter. He hadn’t been expecting anyone, so he was sporting a three-day growth of beard, and wearing ragged sweatpants and a holey t-shirt.

As Pol walked past him, he saw the paused game “Call of Duty: Infinite Warfare” on his TV. Kas closed the door, quickly moved to the coffee table and grabbing the remote, turned off the set.

Pol casually looked around the living room and through the kitchen door but seemed unfazed by the wholly disheveled appearance of Kas’s new apartment.

“It’s understandable that you wonder about my identity and presence here, Kas. Mother said you’d be confused.”

“You mean your mother. My parents died in a car accident last year.” Kas didn’t know why he was suddenly so angry.

“What?” Kas felt like he was going to fall over. When he turned eighteen, Mom and Dad convinced him to look up his birth Mom. They said they’d pay for any expenses and that sooner or later he would want to know about her and maybe even meet her. He searched for nearly two years but all he found out was her first name and that she was an immigrant. Besides that, it was like she’d fallen off the end of the Earth.

“I know what you’re thinking but this isn’t one of those typical ‘twins separated at birth’ stories.

“You know our mother? She’s alive? You know where she is?”

“You might want to sit down for this Kas.” Pol set the twin boxes on the coffee table next to the video game controller and then gently moved his brother onto the sofa. Then he sat on the arm of an easy chair a few feet away.

“Yes  you can meet her if you really want to, but it’s complicated.”

“What’s complicated? I mean that’s why you looked me up, went through all the trouble of finding me, right?”

“Sort of. You see the two gifts I’m bearing come from both of our Fathers.”

“Yes, but while we obviously must have a single mother, we have two Fathers. Yours happens to be the King of a small Balkan nation, and island actually, and mine…well mine is something else entirely.”

“I don’t blame you, Kas. In your position, I would be too. It might help if you opened your presents.” Pol picked up the box nearest him. To Kas they looked identical so he had no idea how his twin could tell the difference. “Here.”

Kas found that his hands were trembling as he accepted the container. He managed to slip off the bow and tear off the wrapping paper. Inside the box was a ring.

“That’s a signet ring with the seal of the royal family. It identifies the wearer as a Prince.”

“I’m…I’m a Prince? You’ve got to be kidding.” It began to dawn on Kas that he was being played and that Pol was messing with him for some reason. Sure, he was an orphan and he knew nothing about his birth parents, but that didn’t mean he had to buy this load of bullshit.

“The second present is more significant. In fact, its Holy.”

“Holy.” Oh yeah. He was definitely being played.

“Open it.” Pol picked up the other box and presented it to Kas.

Kas put the ring back in its box and set it on the table, then took the other gift and opened it. After all, what did he have to lose?

“Don’t you ever just say something straight out?”

“Kas, after you left work on Friday, how did you get home?”

“When you got off the bus, what happened next?”

“You ran across the street and then?”

“I…I got off the bus, started running across the street and…” Kas looked down at the empty box in his hands and then back up at Pol. “I don’t remember. I don’t remember reaching the other side of the street.”

Pol dropped the box and jumped up from the sofa. “What? I’m dead?”

“You were, Kas. You were but not anymore. That’s the second present.”

“I…I don’t remember anything between running across the street and hearing the doorbell. What happened?”

“Someone who had a little too much Christmas cheer turned the corner too fast in his Lexus. He didn’t see you until it was too late. You were declared dead at the scene.”

“I don’t believe a single word you’re saying. I mean, I’m alive. This is Christmas, not Easter so I’m not in the middle of a resurrection story.”

“When I found out, I asked my Father for a favor. I asked him to let me share my immortality with you. He agreed. That’s the second gift.” Pol stood up. “If you want to learn more, inside the first box is a telephone number. It’s your Father’s private number. You’ll be put through to him day or night. He’s more than willing to send you airfare. The rest of your destiny is waiting for you in his Kingdom. Mother will be so glad to see you.”

Pol turned and walked back to the door.

“My name is Pol, our mother’s name is Leda. She had two lovers that night almost twenty-five years ago. Your Father’s name is Tyndareus. When you meet he and Mother face-to-face, they’ll tell you everything else.”

Pol opened the door and then looked back. “A pleasure to meet you, dear brother. I trust we will see each other again soon.” Then he turned and walked out, closing the door softly behind him.

Kas stood there and stared for nearly a minute. Then, hoping it was all a dream, he looked for the two boxes thinking they wouldn’t be there, but they were both still sitting on the table where he’d left them.

He looked in the first one and under the ring, saw a slip of paper with an international phone number and the same symbol the ring bore printed on it. Kas looked into the second box. It wasn’t completely empty. There was another piece of paper. He took it out and saw a different symbol, the astrological sign for Gemini.

I wrote this for the Saturday Mix – Double Take writing challenge for 23 December 2017 (yes, I’m late to the game) hosted at Mindlovemisery’s Menagerie. This one is a homophone challenge involving two sets of homophones:

Both sets, that is all five words, must be used in the body of the story, which I managed to accomplish.

Since the theme is “Double Take,” I thought of the two most famous twins in the world, Castor and Pollux. According to Wikipedia:

In Greek and Roman mythology, Castor and Pollux, or Kastor and Polydeuces, were twin brothers, together known as the Dioscuri or Dioskouroi. Their mother was Leda, but they had different fathers; Castor was the mortal son of Tyndareus, the king of Sparta, while Pollux was the divine son of Zeus, who seduced Leda in the guise of a swan.

When Castor was killed, Pollux asked Zeus to let him share his own immortality with his twin to keep them together, and they were transformed into the constellation Gemini.

That’s as much of the mythology as I chose to incorporate into my wee tale. I have to say that it was fun. To read other stories based on the prompt, click on the “Saturday Mix – Double Take writing challenge for 23 December 2017” link above and look in the comments section.