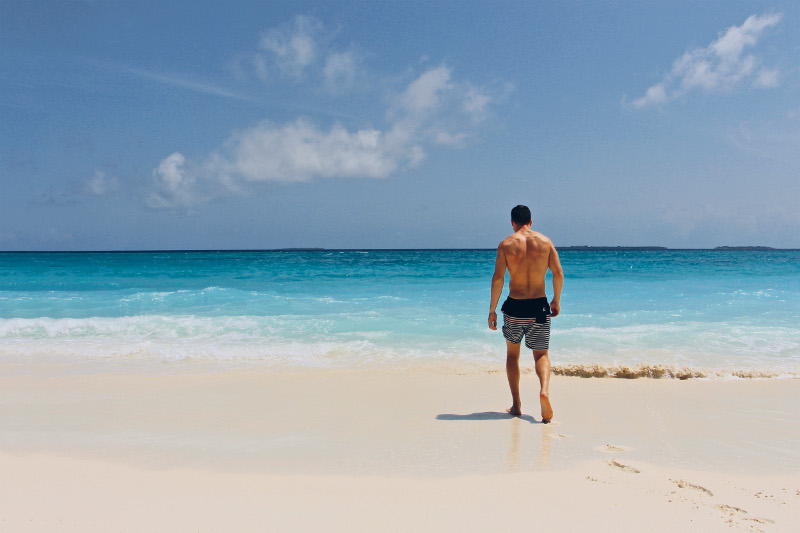 The sky was a brilliant cyan when she first saw him on the beach. He was staring out at the ocean as if witnessing a tragedy and in spite of her vow of utter celibacy, she experienced an overwhelming sense of Koi no Yokan. Whispering a curse and then immediately regretting it, Merilyn continued her run across the shoreline leaving the solitary young man behind.

The hostel was serving thin Miso soup and fish again that evening when he walked in. Merilyn tried not to roll her eyes as Donn, at the head of the table, was again vaunting about his prowess with the Shinai and how he was sure to win the Kendo games which would begin the next week. They heard a noise at the door and she recognized the man from the beach standing at the threshold. Tradition demanded that even an ego as big as Donn’s cease pontificating so they could greet the visitor.

They each in turn stood and bowed to the stranger, introducing themselves and welcoming him to the competitor’s hostel. He bowed in return in a gradual manner which she would learn was his way in social settings, though most certainly not during battle.

“Lien.” He said his name softly, almost a mumble. The others adjusted their seating at the low table and since Merilyn was nearest the kitchen, she got up to prepare his share of the meal. In the morning, Donn, Karel, and some of the others would acquaint him with the routine, but hostels all had very similar methods of operation, so no doubt it would already be familiar to him.

That night, she was soaking her feet in paraffin while feeling annoyed with herself for not having fixed the leaky faucet earlier in the evening. She would have to go to the utility closet for tools, but having gotten ready for bed, she was far too scantily clad to enter the common areas. It would have to wait until morning.

Twenty minutes later, she was beginning to nod off, exhausted from the day’s training. Merilyn cleaned off her feet and set the basin of wax aside for proper disposal the next day.

She was almost asleep before her head was fully resting on the pillow and as her body relaxed, the young woman’s mind entered the maelstrom of dreams where visions of Lien awaited her, both on the field of contestants and in her maiden’s bed.

What was it about the newcomer that he became a resident in the unwilling mind of Merilyn Brandt?

I wrote this for Wordle #187 hosted at Mindlovemisery’s Menagerie. The idea is to take at least ten of the twelve words/terms listed and use them in a poem, short story, or other creative work. I used all twelve. They are:

I put all of the words in bold in my story so they’d be easier for readers to pick out.

Admittedly, this is really the beginning of a story since there is much that has been left unexplained. On the other hand, it may make a great start to something I’ve been trying to work out for an anthology submission. I’ll have to let you know.

Here are links to explanations of Kendo and Shinai in case you want to learn more.

Find out more about Merilyn by reading The Girl with the Green Eyes.

5 thoughts on “Koi no Yokan”