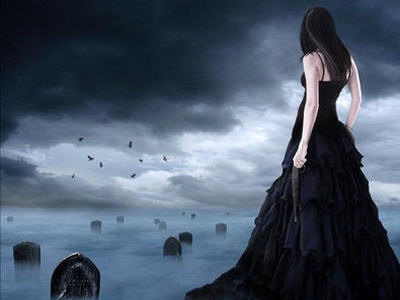 The lady in the black satin dress walked into the bar because of the Pit Fiend Promise she had made. Except for the cocktail waitresses, she was the only woman in the place, and the men all turned to watch her walk in. Some obviously thought she had incredible assets both below the hemline and the neckline, but the vision of others was probably too blurry to make out the details.

“What’s your order, lady?” The barman was past middle-aged, weighed over 300 pounds, and looked like whatever dreams he may have once cherished had since sailed away from him over the horizon.

He turned to get a clean glass and reached for a bottle of Johnnie Walker.

One of the roughnecks had managed to work up the courage to approach her, probably to impress his mates. He was the sort of man she normally had an aversion to, like drinking Ratsbane, or bathing in sewage, but he was the one she was looking for.

The fat, depressed looking barman set the drink down in front of her. She picked up the glass and drained half of it in a single gulp.

“Damn, lady.” He was obviously impressed, but that didn’t seem hard to do.

“You know someone named Chance Bailey?”

“You’re a lot more class than this place ever brings in. Why you looking for me?”

She tried to project as much gravitas as she was capable of, which was considerable. “I’ve got a message for you and I’m paying off a debt.” The lady dipped two fingers into the left cup of her bra causing Bailey’s eyes to nearly leap out of their sockets. Then she produced a rather oversized gold coin and slapped it down on the bar.

“This is for you. The old man said to find you when he died and hand it over.”

“This is just business, my last business with him.”

“He’s gone?” Half-drunk, hadn’t bathed in a week Chance went from obnoxious to pathetic in an instant. She almost felt sorry for him.

“Damn. Thought he was too mean to die.”

“All men die. He said you’d know what the coin means.”

“Means I can go home now, collect what’s left of the inheritance, and then figure out what to do with my life.”

“Then our business is concluded.” She reached into her “stash” again and extracted enough in paper money for her drink and a tip. Then, tossing back the glass one more time to empty it, she turned and started walking away.

“Hey, wait! Who are you? What kind of business you in with the old man?”

She paused and slowly turned her head to look back. “I kept my promise. I don’t owe him or you anything else.”

Charlotte Bailey left without another word, hoping she’d made it into the darkness outside before her tears began to fall. The old man had wasted his life on accumulating a fortune at the cost of caring about his family, and his only son had done the same chasing a beachcomber’s pipe dreams, booze, and women.

The coin was part of the first treasure the old man had discovered, though he was very young at the time. It was the first thing he ever gave to his son, but he took it back when Chance proved unsuitable to run the business.

No one ever talked about the daughter who had runaway when she was fifteen, escaping a loveless, emotionally abusive father and a clueless brother who would never defend her. She walked out the day her Mom died. Charlotte only went back home when she found out about the old man’s illness, and only then because of his detectives. They’d tracked her down and showed her his note begging her to return, begging for forgiveness.

He’d given her one half of the fortune ahead of time on the condition she would fulfill the promise. Now all she had were the ashes of the past and the hope of a future.

I wrote this for Wordle #191 hosted at Mindlovemisery’s Menagerie. The idea is to use at least ten of the twelve words listed in the Wordle in a poem, short story, or other creative work. I bolded the ones I used. Here’s the full list:

To find out what happens to Chance next, read Dark Mirror.

3 thoughts on “The Pit Fiend Promise”