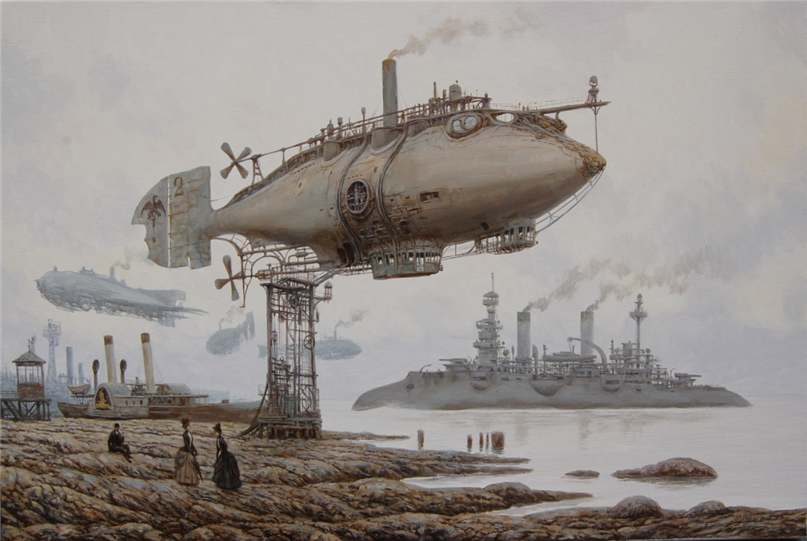 “Grandparents sort of sprinkle stardust over the lives of little children.” –Alex Haley

Keisha guided, or so she thought, the ornately decorated airship “Graceful Delight” out of the gigantic hanger set upon a massive floating derrick just off of Alameda. However she was about to discover there’s a difference between reading and memorizing instructions, and real practical experience. She had never driven a car before, let alone piloted a fifteen-meter-long gondola suspended under a sixty-meter dirigible. When the propellers begin to drive the ship forward, they had spun up to a preset speed, dictating the Delight’s velocity, and whatever gas was inside the thin, metallic envelope above her head, was providing buoyancy and lift.

The Delight was accelerating upward and Keisha didn’t know how to stop it.

Frantically, she racked her memory for how to control the ship.

“Let’s see, these levers control engine speed, but how do I keep from going up?”

The airship was over the Bay now, heading due west toward San Francisco, but even a tiny glance told the fifteen year old that it was a San Francisco she had never seen before. She’d have to admire the scenery later, because there were scores of ships like hers in the air, and they all seemed to be frantically steering out of her way.

She heard a hissing and crackling sound come to life at her left side and knew it must be the wireless. Foolishly, she’d forgotten to don the headphones, but she could detect a cacophony of tinny voices streaming from them.

She remembered when she was six and she programmed the first robot she built with Grandpa. No matter what she tried, it didn’t work. The old man told her, “Sometimes you can do everything by the book, and you’ll still get it wrong. That’s the difference between knowledge and experience.”

“Great, Grandpa. So how to I get out of this mess?”

So far, everything and person she had endangered was mobile and could move away from her, but she was less than six-hundred meters from the heart of the City’s downtown, heading right for all those vast towers of wood, brass, and iron looming before the Delight. In only minutes, she would cause a catastrophe where thousands could die.

“Why aren’t you climbing like before, you hunk of junk? I want you to climb or we’re going to crash.” She wanted to cry out of frustration, but she couldn’t fall apart now. Keisha finally found a way to turn the ship, but as she began to track northward, she started to descend, and the western-most tower of the Oakland Bay Bridge was directly in her path.

She looked down, but instead of cars, the bridge was conveying steam locomotives back and forth, the upper layer heading into the City, and the lower departing.

“Those are passenger trains. I could kill hundreds.”

The head phones were still alive with voices, but one of them cut through the rest. It was the only voice she recognized.

It was his voice, but not quite. She’d seen a whole bunch of what looked like old biplanes buzzing around when she first left the Alameda hanger, but now one was approaching her from the north and below. Then it disappeared as it passed her. 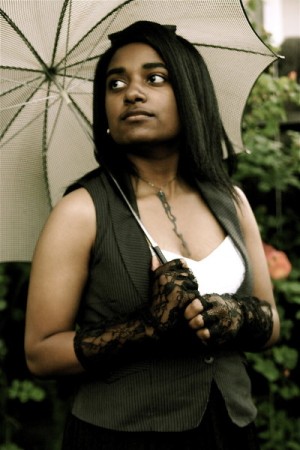 Found at the Chronicles of Harriet blog

“What the hell…oh wait.” She remembered. There was a second gondola behind this one, and you could land a plane in it if it were small enough. She found the lever for the hangar door to her right, sticking up from the floor. Grabbing the handle, she depressed it, releasing the locking mechanism. The Delight shuddered as the door lowered, adding marginal length to the short runway.

She was only a couple of minutes from hitting the bridge.

“Hurry, Grandpa,” she whispered. Keisha pulled back on the wheel trying to climb, but she’d forgotten to increase the speed of the engines. They were slowing and would stall in a few seconds. What the hell controlled the ship’s buoyancy?

The airship lurched again and she heard the voice. "Close the hanger. I'm in."

She reversed the lever and a red light she hadn’t noticed before turned off, while the green one next to it lit up.

The leading edge of the Delight’s superstructure would hit the tower less than fifteen meters from the top in under a minute. She was still going up but way too slow. Then the engines died, and she was at the mercy of momentum and the wind.

Suddenly, she was slammed down into her seat and she had to hang on to the wheel to keep from falling as she ship shot straight up. For a moment, the bridge tower appeared less than five meters from her face, and then it was gone. He did it. He made the Delight climb.

The Delight wasn’t pressurized or even heated as far as Keisha knew, and if she went too high, she would be in real trouble, not that she didn’t know what that felt like.

Heavy footfalls running toward her from behind. He must have come though the Engine Room. That’s how they’d escaped disaster, but they were still out of control.

She wheeled around in her chair just as he entered. “I’m so glad you’re here, Grand…”

Keisha froze in mid-sentence. The man who was at the rear of the cabin was no older than her Papa. He had jet black hair with just a few threads of gray, and sported a salt and pepper beard.

He was wearing a flight suit and leather helmet similar to hers, but one of the goggles’ eye pieces had multiple lenses, and the glove and sleeve of his right arm was covered with moving gears, rods, and spinnerets. In fact, there seemed to be no end to the gadgets and buttons on his clothing, as if he were some crazy 19th century mashup of Tony Stark. The pistols he wore on either hip were the biggest shock.

“Child, it’s me, Mr. Isaiah Covington. Get out of that seat and let me take over before it’s too late.”

I started Keisha’s story out in a couple of flash fiction pieces called Keisha’s Grand Adventure and Keisha Takes Off, but yesterday, I combined and expanded on both to create the first chapter in her story called The Adventure Begins.

I know some people who advocate for stronger female characters, especially those of color, might object to me not letting Keisha solve her own problems, but as I mentioned above, there’s a difference between knowledge and experience, and it’s a lot to expect a fifteen-year-old girl, even one who is extremely intelligent and talented, to suddenly know how to maneuver a 200 foot long dirigible through the crowded skies over an alternate universe San Francisco Bay.

By the way, this isn’t time travel. Steampunk is a sub-genre of speculative fiction that combines 19th century technology and aesthetic designs with 20th and 21st century effects, a sort of stylistic mashup of different eras both visually and functionally. There’s tons about it on the internet, and a Google search is most illuminating.

The next chapter is Police Pursuit.