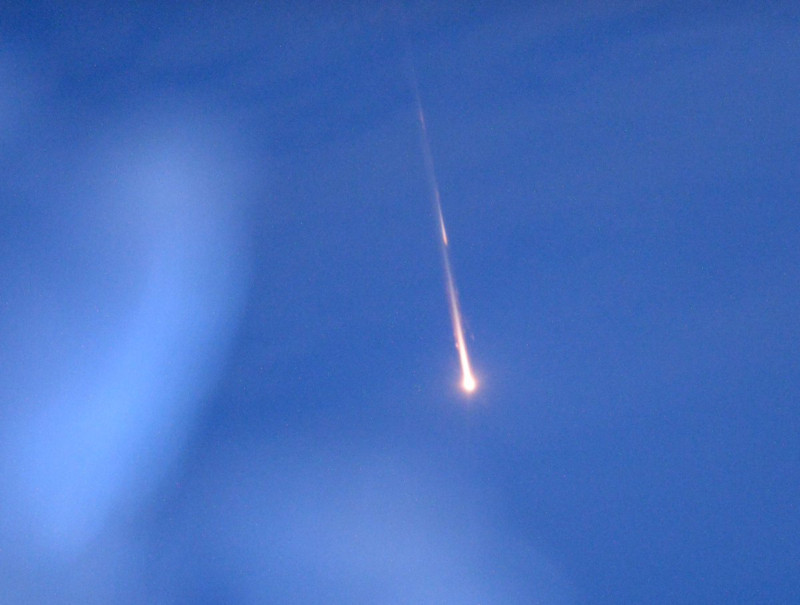 Progress spacecraft re-entering the Earth’s atmosphere in a blazing trail of plasma, as seen from the International Space Station – © NASA

The Escapist initiated the landing sequence as the ship began its rapid descent into the stratosphere, his neurochemical link to the spacecraft’s control systems making this nearly reflexive.

“Welcome to my world, Jack. Glad you could join the party.”

The voice of the Beast crackled in his audio receptors sounding as if he were a game-show host speaking offscreen; his tone exuding an untoward friendliness and familiarity.

“I have the Amaryllis with me.”

“The actual item? I’m impressed. Whole armies have been slain, eviscerated by the Negative whose sole task was to guard it unto eternity.”

Jack’s vessel streaked into the troposphere, the material of its hull easily absorbing the heat generated by the friction of reentry.

“Just make sure Roz remains alive and unharmed and you will behold the ultimate power in the universe in fifteen minutes.”

“I keep my bargains, Escapist. Your wife is my guest, not my prisoner.”

Jack loved his wife very much, but he couldn’t risk interstellar Armageddon, even for her. Fortunately, he wouldn’t have to. The escape artist turned bounty hunter was about perform his greatest feat.

He had arrived on Earth a full day before he was expected and was operating the craft remotely. He had kept his word and purloined the Amaryllis device from the Negative on Desitrophe just as he promised, but he would never turn it over to the Beast. Having killed all of the minions guarding his dear Roz, and assuring she was safely hidden halfway around the planet, he would use the crystal for only one purpose. In less than a quarter of an hour, his nemesis would indeed see his prize, but only a split second before it turned him into a slowly cooling corpse.

As was his habit, he tuned his audio receptors to access his MP3 collection. He wanted a bit of mood music as he concluded the final act of this epic story. He chose Donovan’s “Mellow Yellow.”

I wrote this for Wordle #197 hosted at Mindlovemisery’s Menagerie. The idea is to use at least 10 of the 12 words listed in a poem, short story or other creative work. I used all 12 and bolded them in the body of my tale so they could be picked out more easily by the reader.

When I saw the word “Escapist,” I thought it would make a cool title or alter ego, so I gave it to my protagonist Jack. Naturally, I had to name his enemy “Beast,” and then create the science fiction setting for their final interaction.

Yes, I know an “amaryllis” is a flower, but it also makes a great name for the ultimate weapon in the universe, guarded by a superpowerful being known only as the “Negative.” The planet “Desitrophe” is a combination of a variant of the word “decimation” and “catastrophe.”

Oh, the Escapist is very, very loosely based on Scott Free, otherwise known as Mister Miracle, a creation of the late, great comic book artist Jack (the King) Kirby. In the comic books, Free is married to Big Barda. Kirby based their relationship on the one he had with his own wife Roz, so naturally in my wee fiction, Jack is married to Roz.

3 thoughts on “The Last Exploit of the Escapist”