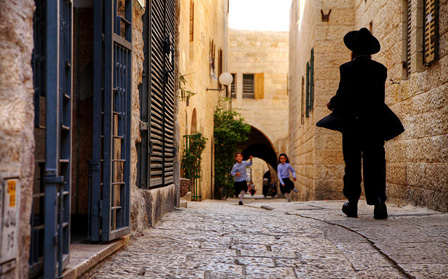 Jewish Quarter of the Old City of Jerusalem – Found at Israel Tours.

Rachel Silverstein found the Torah stifling. She’d been born and raised in Crown Heights, the home of the followers of the Rebbe in Brooklyn, and when she was twenty, she took a sabbatical to study in Israel.

“But Rabbi, our traditions and practices are so primitive. I don’t understand why a woman can’t be a Rabbi, or daven wearing tefillin and a tallit. Didn’t Hashem create us all, men and woman in His image?

Rachel and Rabbi Bergman were walking together in the Jewish quarter of the Old City on a pleasant spring afternoon on a Thursday discussing her struggles with being an observant Jew.

“I fear you left home to pursue a secular education too soon.”

“There’s nothing wrong with wanted to broaden your horizons. Most of the Haradi here study Talmud to the exclusion of even basic mathematics.”

“They have a different set of priorities, Rachel. It is true, they don’t have to be your priorities…”

“Then what do you think my priorities should be?”

The Rabbi was kind and patient, but Rachel would have appreciated more if she paid attention to how she was treating him. He feared she was already far too assimilated into secular culture to continue her studies.

“You remind me of the Gentile who approached Hillel and demanded he be taught the Torah while standing on one foot. It takes much more time and patience.”

“Straightforward common sense shouldn’t be that hard to grasp. The Torah is a cage, not a liberator.”

“Then what do you suggest? Certainly not Goyishe Christianity.”

“Hopefully, I’m rarely thought of in that manner.”

She stopped and turned toward him. “Look, I’m sorry that I’m so in your face, but I’ve had this stuff shoved down my throat for all of my life. It’s time for me to decide who I am and what I believe.”

“I wouldn’t have asked for anything else, Rachel. I take it you’re leaving us?”

“I’ve got a flight out of Tel Aviv Monday morning.”

“Where are you headed?”

“The Buddhists? Not a few of our young people have pursued their teachings. May Hashem watch over you.”

She paused for a moment thinking he’d be mad, explode, lose his temper. Was he just going to let her go?

“Thank you, Rabbi. I’ve appreciated everything you’ve done for me, but I need to find my own path.”

“I understand.” On the surface, the Rabbi’s mood hadn’t seemed to shift, but beneath, he was heartbroken. Another Jew seduced away from her people. What Hitler’s Holocaust couldn’t accomplish, assimilation and secularization would. More’s the pity.

Rachel and the Buddhist monk were taking a similar walk down a side street in Kathmandu six months later. She found his teachings paradoxically comforting and shallow. This was what she wanted wasn’t it? Wasn’t this her path?

They had been strolling in silence for nearly half and hour when something caught the monk’s attention. He bent over and picked up an object. It was a wallet.

The monk opened it and fingered through the Rupee bills. Then he slipped it in his pocket.

“Excuse me, Bhante, but shouldn’t we try to find the owner of that wallet? That looked like a lot of money.”

“It was that person’s karma to lose the wallet and mine to find it.”

“But that could be a family’s rent money, or all they have to pay for food for the next month.”

“You must be patient, Rachel. The ways of karma are not always easy to discern.”

“You didn’t even try to look for an ID.”

He looked at her with mild indignation. She realized she’d insulted him, but what he was doing was wrong. Everything she’d ever been taught said if you find something of value another has lost, you need to make every effort to locate the person and return it.

Two weeks later, Rachel’s flight was descending toward Tel Aviv. Rabbi Bergman had agreed to meet her there.

I wrote this for Tale Weaver #178 – Karma – 5/7/18 hosted at Mindlovemisery’s Menagerie. The idea is to craft a poem, short story, or other creative work on the topic of Karma.

I created a fictionalized tale of a young woman who I’d read about some years ago in a Jewish online publication. I can no longer find the original story, so I replicated it here from memory as best I could. Supposedly the essential facts I’ve presented are correct.

I’m not trying to denigrate Buddhism, but this is how karma was presented in what I’d read. Perhaps it was Rachel’s “karma” to return to the teachings of her forefathers and remain an observant Jew.

8 thoughts on “The Karma of Rachel Silverstein”