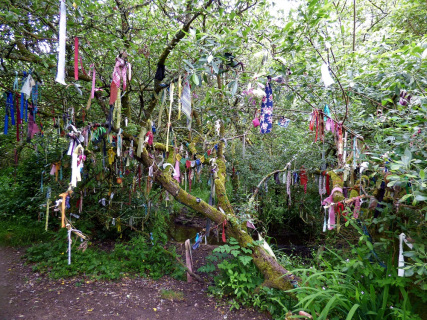 Little Mari, a year younger than five-year-old Zooey Davidson, took her by the hand as they ran toward the wishing tree. In their free hands, they each held a colorful cloth provided by Tala, who looked like she could be Mari’s teenage sister but wasn’t.

“Danilo helped me put my first one up. Now I’ll help you.”

“Did your brother tell you what it is?”

“Don’t you want to see your Mom and Dad again? I do.” Zooey had been looking up a the tree which seemed to be decorated with hundreds of bright, cheerful flags. Then she realized the four-year old had stopped talking.

“What’s wrong?” Zooey took the other girl’s shoulder and then hugged her because she was crying.

“I don’t have a Mom or Dad.” The little Filipina sobbed against her friend for a few minutes. Then, still hugging, she muttered, “Mommy died when I was a baby and Danilo says even he doesn’t know who Daddy was. Mommy told my brother that baby Jesus would take care of us, but only Danilo really did. He got me food and water, but we still lived in dirty streets. I guess I got really sick, and he thought I was going to die. Then we were here and Shay said she’d be my Mommy, and that all of the dragons and other children would take care of us. She said we’d take care of each other.”

“I’m sorry. I didn’t mean to make you said. I just miss my Mommy and Daddy a lot.”

“I know. I didn’t mean to make you sad either.”

Then Zooey realized she’d been crying, too.

Far into the shadowy wood, where you wouldn’t think something so big as a great golden dragon could never hide, Shay, the Mother Dragon lay concealed, curled up in the darkness, green eyes staring intently at the two little girls.

She sighed, for she knew that Mari, her brother Danilo, Tali, and so many others, almost all the others, except for Zooey and the other Davidson children, had no homes or parents to go back to. They were the children of poverty and plague, of war and monsoon. They were children who had been starving in the streets, in the wilderness, by the ocean, the survivors and leftovers of humanity, their parents slain or lost, and there was no one who would or could help. If whatever magic that called them to Vovin, the tree city nestled in this otherworldly exile, had not been in operation, tens of thousands would have died. Instead, here they lived, but only here.

That is except for the Davidsons.

“What should I wish for?” Zooey looked up at the spangled and brightly adorned tree.

“You can wish for your Mommy and Daddy. It’s okay.”

“I know what I’ll wish for.” The kindergartener tied her rag to the highest branch she could reach, right next to dozens of others. “I’ll wish for you to be happy.”

“You got your wish really fast, Zooey. You make me very happy.” The girls hugged again and then parted.

“What will wish for?”

Mari tied her cloth next to Zooey’s. “I wish that we’ll be friends forever.”

The great dragon pondered the children’s words, for if her plan was successful, while Mari would always stay with the dragons, Zooey would have to leave.

“Hey, you two.” Kofi, an older teen boy who came from someplace called Ethiopia, called to them from the edge of the clearing. “There’s another kid coming in. He’s in a boat on the sea. Let’s go greet him.”

Tali had told Zooey and her four siblings, that a new child arriving was a time of celebration, but also of kindness. Like the rest of them, they were always confused and scared coming from their own world and into Vovin. Remembering how they had disappeared from their lives before and been rescued here, many hundreds of cloths on the wishing tree were the sincere supplication, that every little boy or girl who had no place to go and no one to love them and take care of them, would be brought here, a place where children and dragons lived together in affection, companionship, and hope.

I wrote this for the Thursday #writephoto prompt hosted at Sue Vincent’s Daily Echo. The idea is to use the image above as the inspiration for crafting a poem, short story, or some other creative work.

For some months now, I’ve been using Sue’s weekly prompts to write my first novel (the first draft) chapter by chapter. Last week with Vovin, I reached the end of the book, except for the Epilogue which is the formal ending.

But I wanted to use this week’s prompt to write something of a continuation of the lives of the Davidson’s in the dragon’s city, and to reveal a little bit more about the children living there. Oh, the kid they’re about to greet is based on a draft of the story Lost on Forlorn Seas which I wrote some months ago, but left in draft form until just now.

13 thoughts on “The Wishing Tree”