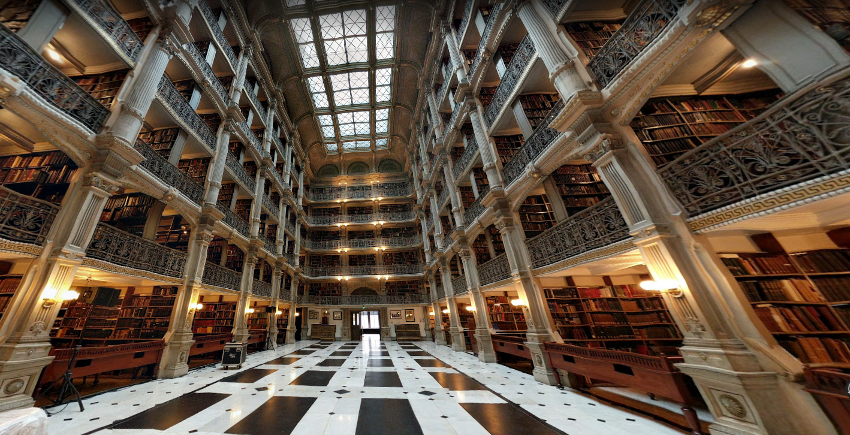 Twelve-year-old David Cohen experienced a rare moment of awe standing in the George Peabody Library. He’d been accepted in the Cantate, a part of the Peabody Children’s Chorus, certainly a tremendous honor, but a secondary achievement.

He had started reading at age two, mastered algebra at four, spoke five languages by six, and written his first symphony by eight.

His goal now was to devour the contents of this library in under six months, just as he had already consumed most data sources accessible online.

His mother used her influence as the President of the National Academy of Sciences to conceal David’s “talents.” If the government found out his IQ was rated somewhere between 300 and 450, they’d turn him into a lab rat when his ambition was to cure the ills of the world.

But even he had no idea that one day, he would be called King and Messiah.

I wrote this for the What Pegman Saw flash fiction challenge. The idea is to use a Google maps image/location as the prompt for crafting a piece of flash fiction no more than 150 words long. My word count is 149.

Today, the Pegman takes us to the Peabody Institute of Johns Hopkins University. Of course, I looked it up, but it wasn’t until I paid more attention to the image above and imagined myself standing in the middle of that library that I got my “hook, or rather part of it.”

Of course, the information about the Peabody Children’s Chorus figured into my tale, as did the ScienceTrends.com article Here Is The Highest Possible IQ And The People Who Hold The World Record.

But there was still one piece missing. What sort of goals should David have? I’d picked his last name at random, but then I realized that if one were to become the long-awaited Messiah, one would certainly have to train for it.

Unlike Christianity, in Judaism, the Messiah isn’t a supernatural being, but rather a wholly human Jewish male of the line of David and the tribe of Judah, who would grow to become both a great military leader, and a person of remarkable wisdom and piety.

150 words didn’t give me enough “space” to describe his religious training and accomplishments, so they’ll have to be assumed.

31 thoughts on “The Future King”