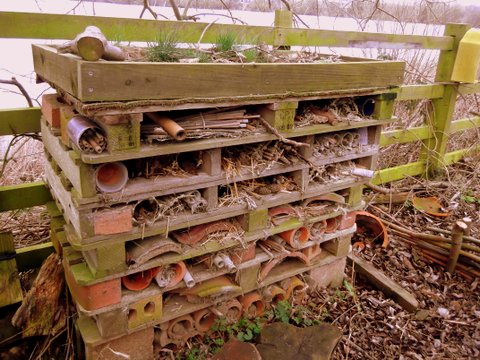 He had let the garden go after she died. Erin was six when she was hit and killed in a crosswalk. She believed fairies sprinkled magic dust on the plants to make them grow.

After Jared and Paulette divorced, it had been just the two of them. Now he was alone in the backyard at night.

At first, he thought he was dreaming when he saw them. He walked closer to the stacks and got on his knees. They were little people with wings spreading dust. One came nearer, right up to his face. The little fairy smiled. “Hi, Daddy.”

I wrote this for the Rochelle Wisoff-Fields writing challenge. The idea is to use the image above as a prompt to craft a piece of flash fiction no more than 100 words long. After a lot of editing, my word count is 100.

My wife buys a lot of things at yard sales because they’re cheap. This includes a ton of children’s books for our three-year-old granddaughter. We have several books in the Pinkalicious series (no, I’m not kidding), and my granddaughter loves them.

In one of the books, Pinkalicious believes fairies come every night to sprinkle dust on their garden to make it grow, and she and her brother Peter, not only camp out in the backyard at night to see them, but build the fairies a pretty impressive little house.

That’s where I got my basic idea.