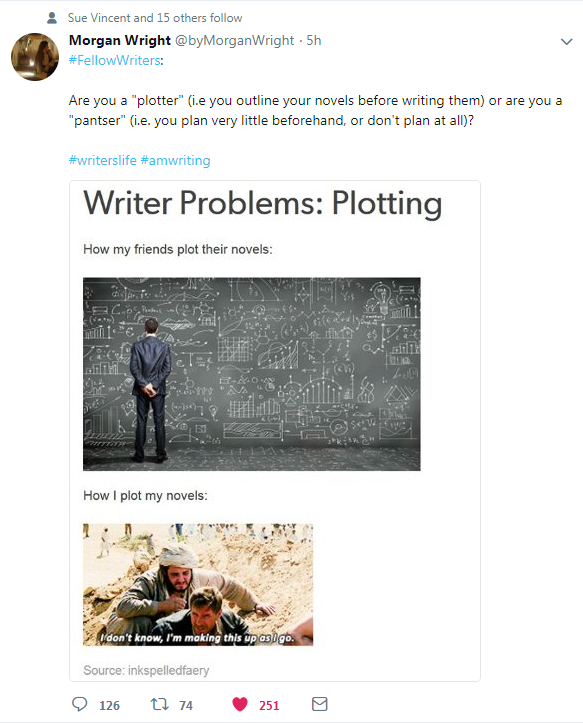 Yeah, that pretty much describes me, or more specifically, this does:

It’s come back to bite me in the butt more than once.

Okay, here’s the deal. I have the first draft of one novel fully finished, I’m stalled in the middle of the first draft of the second, and several others are in a quasi-state of existence (and I’m terrified of actually beginning the novel editing).

After about the first five chapters of my fantasy novel, I started using the Thursday #writephoto prompts on Sue Vincent’s Daily Echo as the motivation to complete one chapter a week. It worked pretty well, and I actually got to the end with the story being semi-internally consistent.

It still needs a lot of work.

The stalled novel is a Steampunk effort that suffers even more from internal consistency problems than the first, plus, unless I choose to make it a novella, I’ll hit the climax too soon, and with too small a word count to make true “novel-hood.” Really, I need to sit down and rethink the project, especially since it was originally based on two pieces of flash fiction.

Come to think of it, my fantasy novel was based on a three-part story arc I wrote for my grandson, as well as some loose ideas that have been floating around in my head for the last five years.

Compared to novels, flash fiction is a snap. Someone provides a photo, or a sentence, or a few words, then defines a word count limit, and it’s off to the races. More than a few of the short stories I’ve submitted for publication (all of which have either been rejected -some more than once- or are in limbo, started out that way).

Since I write a ridiculous amount of content per week for this blog, I’ve amassed a lot of stories I can use as the basis for submission calls.

But that brings up the next issue. What I put on my blog isn’t anywhere near what would be required for a professional periodical or anthology, so I format the heck out of them, and then I edit, edit, edit. In the process, I sometimes do a significant amount of rewriting, such that the story turns out quite differently from the original.

I’ve become pretty familiar with the William Shunn template for short stories and novels, since it seems to be an industry standard.

Then, because not all publishers/periodicals accept content by email, I’ve learned to use apps such as Submittable, which lets you monitor where in the submission process your work.

There have been very few stories I’ve submitted that have been “written from scratch” for a publication.

A lot of these open submission calls are “themed.” They’re looking for robots, or pirates, or wizards, or military adventure involving dinosaurs, that sort of thing.

Authors Publish magazine, which I’ve subscribed to, provides a lot of listings for who’s accepting flash fiction, short stories, and novels (usually without requiring an Agent). The aforementioned Submittable also has an option to view an extensive listing of publishers, which can be filtered by genre and other attributes.

Of course, this is just the barebones of my “adventure,” but it keeps me busy (as does my day job, family, and such).

I keep folders and subfolders in Gmail, as well as in WordPress, and on my home PC to keep things organized (in progress, submitted, rejected, never developed). I have submitted two rejected stories only to have them rejected again, but I keep them around because the editors always seem to hope that I’ll find a home for them.

Recently, one editor said that the story they rejected was “well received” but not quite what they were looking for, which was encouraging. Another mentioned that after a “close review,” my story was determined not to be a good fit. If it needed a close review, I guess it wasn’t rejected out of hand for being junk.

I just submitted another story last night, and have done most of the research for writing a story due by September 1st.

I suppose if I were more of a plotter than a pantser, things would go more smoothly. On the other hand, I did a lot of online research for the story I’m about to write, not only because it’s technically involved, but to decide which way to “swing” the story (there are at least two possible endings), so I guess I don’t always “wing it.”

So, writers out there. Are you plotters or pantsers? Share your adventures.

8 thoughts on “Adventures of a Pantser (no, it’s not like that)”