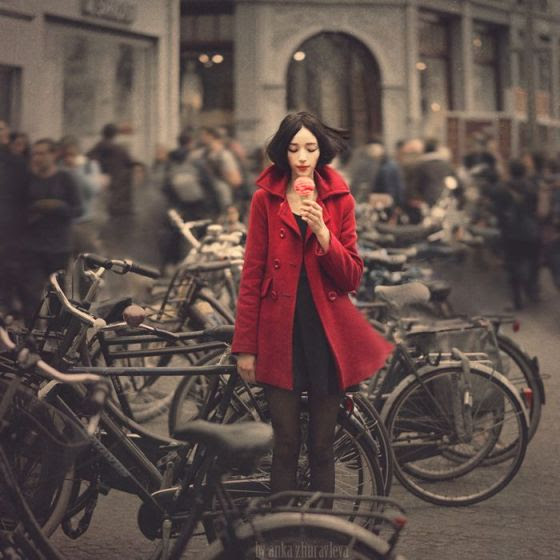 Averie lived in her own little world. I mean, a lot of people are introspective and seem to exist in their personal bubbles, but for Averie, it was the literal truth.

Everyone could see her, but the ordinary human brain couldn’t process her specialness, so they didn’t notice her that much. Averie didn’t often notice other people because, well…they were ordinary.

She didn’t really need a bicycle to get around, but occasionally she indulged herself. A bicycle here, the underground there, a bus, a trolley, it was all the same to her.

When Gio saw her, she was intensely contemplating her strawberry ice cream cone. There wasn’t an ice cream vendor for several miles, but he saw that she had the world’s most chilled, frozen, pink ice cream with real chunks of strawberry in it sitting on top of a light, sugary waffle cone held in her hand.

Somehow it matched her deep crimson coat, which besides the ice cream and her luscious ruby lips, was the most colorful thing about her at the moment.

Like the ice cream, the world was frozen around her, but Gio found that he could not only move, but was compelled to walk toward her. He stepped around the last bike that separated him from her, and then he too considered the strawberry ice cream cone.

She looked up, looked into his eyes, her’s being the deepest chocolate, dark as her hair and what she was wearing under the crimson coat. “I’ve been waiting for you. Here. You can have it.”

She handed Gio the ice cream cone and smiled. Gio still wasn’t sure if she and the cone were real or what he was doing talking to a stranger.

“Go ahead. Have a lick. Let me know what it tastes like.”

He lifted the confection to his face and extended his pink tongue, and with a tiny flick, took just a taste, a bit of ice cream and a particle of strawberry.

“It’s delicious,” he uttered after swallowing. “Who are you?”

“My name is Averie. Yours is Gio. We just fell in love. Come with me.”

She took his hand, chose a direction at random, and they started walking together, sharing a single strawberry ice cream cone. By the time it was gone, they were in another city full of anonymous gray people living anonymous gray lives. Only Averie and Gio seemed really alive, at least as far as Gio could tell. Whoever she was, wherever she was from, he was now like her, living in a world of vibrant, electrifying existence. Some call it magic.

I wrote this for Photo Challenge #226 hosted at Mindlovemisery’s Menagerie. Today, the idea is to use the image above to craft a poem, short story, or some other creative work.

Many of the photos presented here seem “otherworldly” to me, and the woman in the red coat is no different, especially when set against a seemingly drab background. I think there are always those few people who live each day as if it’s their first, exploring the world as if it is brand new, finding adventure in even the simplest experiences. That’s who I made Averie. Fortunately, Gio was able to enter that world and live in it with her. Who knows where it will take them.