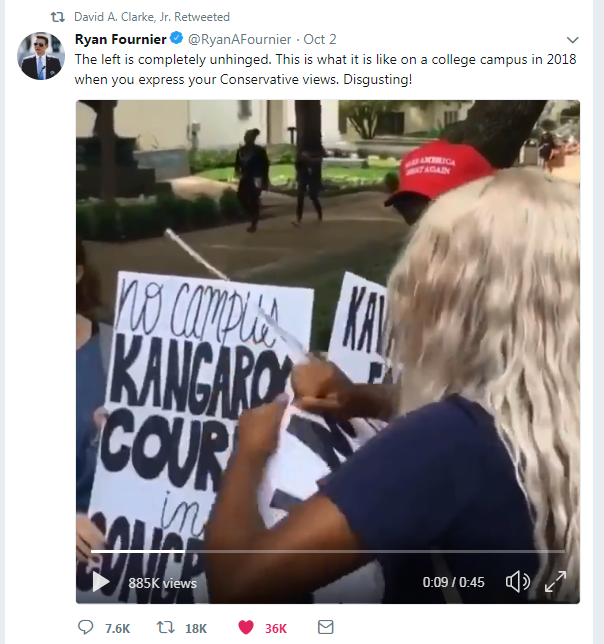 Screenshot of a video on twitter showing a young woman grabbing and destroying signs made by a conservative students group.

It occurs to me that there is a certain inconsistency in promoting kindness and then, at least to some, coming off as politically snarky. Okay, it wasn’t my intent, but I can see how some folks might take it that way.

Today’s the day when the full Senate votes on whether or not to confirm Judge Brett Kavanaugh to the Supreme Court. Frankly, I don’t think either the Republicans or Democrats come away from this clean, and the result, as I said yesterday, is that American politics has officially become a denizen of the foulest sewer, like a mythical alligator.

As I also previously stated, no matter which way the vote goes, we all lose. Oh sure, some people will feel like they’ve won, but look what had to happen to achieve “victory.” Each side accused the other of some pretty vile political tricks, not to mention what ordinary people said and did. Both sides tried to destroy a human being. Both Kavanaugh’s and Ford’s reputations were dragged through the fecal matter, along with their families and anyone who might corroborate their stories, and even children were plagued with death threats.

Anyone who has ever been sexually assaulted or had a family member assaulted in such a manner absolutely projects all of their emotions onto Kavanaugh, as if confirming him to SCOTUS is tacit approval of all sexual crimes, and a total discounting of all victims everywhere.

There has been some push back from those who have been hurt as a result of false sexual abuse allegations, but they pale in comparison, and certainly such people aren’t crowding the streets outside Congress demanding Kavanaugh be confirmed.

Video of Senator Dianne Feinstein found on twitter depicting her mood after she read the FBI updated background check regarding sexual abuse allegations against Judge Brett Kavanaugh, and being mocked by a conservative pundit.

I don’t know. Not really. I suppose the kindest thing for me to do is shut up and not blog about this at all. So I’m not going to be that kind.

But I can try to understand how the victims/survivors (two different but related definitions) might be, you should pardon the use of this word, “triggered” by these events. The liberal publication Medium sent me links to a list of articles related to the Kavanaugh hearings (generally opposing Kavanaugh) and this time didn’t ask me to pay for reading them. One was titled What to Do When the News Cycle Triggers Your PTSD. Yes, it’s completely credible that an unrelated news event might cause a resurgence of anxiety and fear relative to a person’s own abuse.

In some sense, I read opposing views as an act of kindness (although the authors will never know). It’s pretty tough to understand someone, especially folks who are unlike yourself, if you don’t seriously entertain their perspective. You might still not agree, but at least you haven’t cocooned yourself in your own moral certitude to the exclusion of all else.

So I read Bay Area Law Professors Among 2,400 Stating Opposition To Kavanaugh Supreme Court Nomination as well as Brett Kavanaugh and the Power of Public Trauma, and This Is How Men Forget Women. 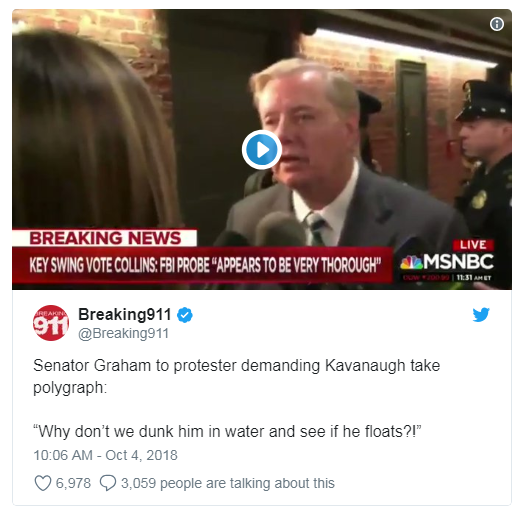 That said, I also read Graham spars with protester over Kavanaugh: ‘Why don’t we dunk him in water and see if he floats?’, and I’ve got to admit, regardless of your politics, the retort was funny (you’d have to be a Monty Python fan to understand why).

As you can see, I’ve posted a number of images from my twitter feed to illustrate the “mood” of the day, and people aren’t doing so well. The one image I didn’t capture, and I now regret it, referenced an argument by some feminists against “toxic masculinity.” One concern is that little boys are taught by their fathers and other men not to cry or otherwise express pain or anger appropriately. Supposedly, the result is that they grow to be men who don’t know how to emote appropriately, and pent-up frustration and rage turns them into sexual abusers, firearm aficionados, and mass murderers.

Okay, it’s not that simple, but again, it communicates the mood from both sides of the matter.

I’ve said before that it seems, relative to his history of alcohol use, Kavanaugh lied under oath, but then again, there’s enough soft evidence to suggest that Ford lied as well. That latter statement won’t make me popular in certain circles, but if we reasonably believe there is a significant probability that Ford’s allegations against Kavanaugh are true, we can also believe that Dr. Ford is not a saint by virtue of being a victim.

No, I’m not making light of her victimization or anyone else’s, but I could weave a scenario, admittedly based on soft and uncorroborated data, that Ford also lied, not necessarily about her abuse, but about other aspects of her life she states are related to that abuse.

I know the only kindness a lot of people will accept is to demonize Kavanaugh and sanctify Ford.

On the other hand, as I said yesterday, it probably doesn’t matter at this point. The deed is done. In some sense, the Democrats did what they intended to do, made their best attempt to torpedo the Kavanaugh confirmation by all possible means. 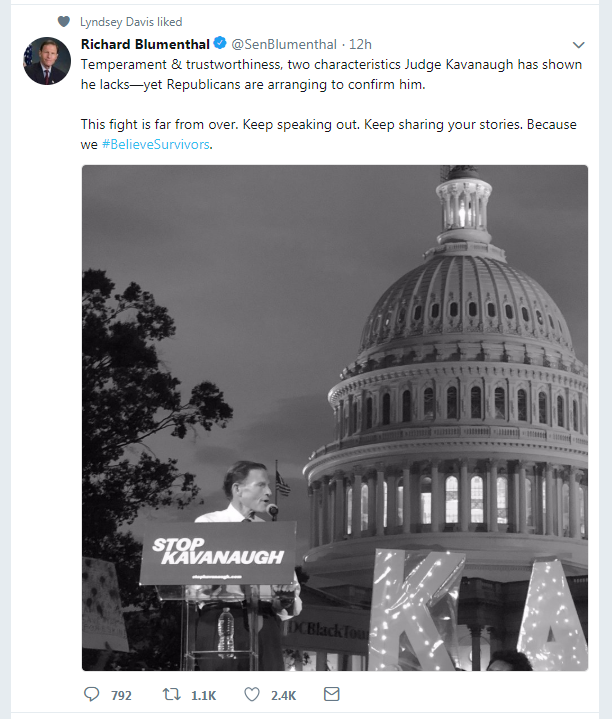 Screenshot taken from twitter of a protest against Brett Kavanaugh.

It’s hard not to want to flush the entire process down the tubes, but again, why bother because they’ve already done it to themselves. It’s the American citizens, all of us, who are their victims.

The only way I can think of to be kind is to try to understand the pain everyone is going through and will continue to go through regardless of the outcome of today’s vote.

During the Obama administration, a series of events spawned the Black Lives Matter movement, and at least one result was a series of violent riots. Whether you feel such violence was justified or not, it increased the divide between white people and people of color that of course, was exacerbated by Trump’s Presidency.

Now, the Kavanaugh hearings and Dr. Ford’s allegations have created or at least amplified a second divide, the one between sexual abuse victims (and guys can be sexual abuse victims as well, but that fact tends to be minimized) and men. Whether Kavanaugh is confirmed or not, that divide will increase, but if he’s confirmed, I suspect we’ll see more demonstrations (which is fine) and an increase in violence (which isn’t fine – “I’m a victim of violence so I’m going to victimize others who had nothing to do with my victimization” is an expected result it seems).

What’s the other option? For people consumed with their own passion, there may be no other option. When you are hurt, afraid, panicked, it can be impossible to see past all that (and as a veteran of anxiety and panic attacks, I know this first hand).

I can’t condone violence or threats of violence, especially against children, but I can try to understand that behind all of the rage is a great deal of pain, and yes, pain and fear can sometimes be expressed as irrational violence.

So everybody, let’s take a deep breath, and realize that no matter the outcome, we still have free will, and we can still see past someone else’s anger to the hurt lying just under the surface.