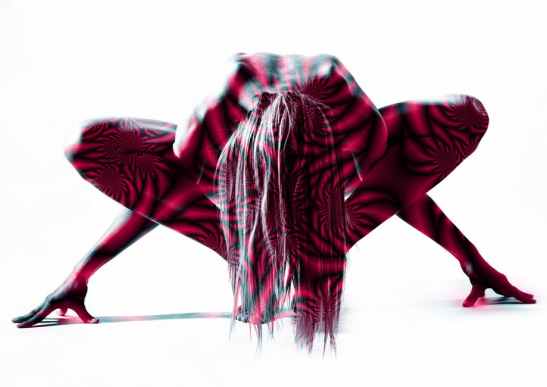 They all came into The Obscene Khrelan’s Saloon to see Jara dance. It would have been more flattering if Khrelan’s wasn’t the only “watering hole” within a thousand kilometers of Julyen’s lone spaceport. Besides the incessant sandstorms and malevolent rock worms, the only thing Julyen had to offer was Cethuitium, an otherwise rare mineral that could be refined into a power source, with applications from rejuvenation treatments for wealthy Consortium lords to advanced jump drives.

No one knew or cared about the red and black strips as her lithe, supple body undulated nude in the dance cage. She was a marvel to behold and every patron all but wet themselves at the thought of possessing that astonishing body (and some even did), even for an hour.

Every night, near the end of her shift, Jara would bless one of them with an evening between her sheets. It was never the same man or woman twice, but that person would carry memories that would light their passion forever.

Oifll Charle stood at the threshold of Jara’s bedchambers, located directly above the dance cage. It was dark, the room illuminated only by the floodlights from the spaceport a kilometer distant. The perpetual sandstorm rattled her windows and cast odd shadows across the room, as Jara, a gossamer wrap draped across her body, sat at the edge of her mattress.

She whispered to him, “Let me see the goods.” If she had been any other woman, the whores of Zansiba, or of J’Fotvak, or of any other of a thousand frontier worlds, she would have meant credits, or their currency card, or even a pebble of Cethuitium if she was a high-class courtesan, but in this case, she just meant “strip.”

As his pilot’s jumpsuit slid off his mediocre body, she grinned lascivious. “Come to me.” She opened her own transparent drapes, and standing, dropped them to the floor.

No one ever revealed exactly how they spent their night with Jara. The sly smile and satisfied sighs told it all. Yet every so often, someone came away from Jara subtly different. And so it was with Oifll Charle. Oh, the smile and the sighs were the same, but he carried a little something extra away, something Jara imparted upon a lover every so often.

Six weeks prior, a woman who called herself Gils Agviek, ostensibly a freighter pilot, visited Khrenlan’s for a night. She too was chosen by Jara, but only because she was a rebel operative possessing contraband data taken from an intercepted transmission. She’d never get it to her customers herself, but that wasn’t the job.

In the night, Jara took what Gils had to offer including the sex, but amid the fluids of desire was data encoded in Gils’ DNA. Then it was re-encoded in Jara’s DNA.

Oilfll Charle whistled off key as he ran through his pre-launch checklist waiting for the spaceport’s flight director to grant his ship, The Karzen Queen, permission to lift off.

He received his clearance and course to the system’s jump point, and then signed off.

The Krazen Queen was hauling a cargo of 2.5 metric tons of priceless Cethuitium sealed in Carbon 4, while her pilot was carrying DNA encoded data on Consortium Legion placements in Sector 5, Quadrant B of the outer rim to the mistress of one of a logistics officer on Mandalic Prime, the one who Oilfll would be sleeping with three nights hence.

When the revolution was won, Jara would be made a General in the New Order.

I wrote this for Tale Weaver #195 – Dance – 1st November hosted at Mindlovemisery’s Menagerie. The idea is to use the concept of “dance” as the inspiration for crafting a poem, short story, or some other creative work, using no more than 500-600 words.

I wrote my story and then discovered it was well over 1,000 words. Too long, so I tried cutting it down, but only made it to about 670 words. Sorry, but I’m calling that close enough, since I can’t imagine what else to cut out and still leave a cohesive tale. In fact, this one could be expanded quite a bit more if I had the time and inclination.

I set my story in the universe (but not with the characters) found in my “Consortium” series, related in tales such as The Last Flight of the Cinnabar Breen, The Day I Destroyed the Universe, and The Haunting of the Ginger’s Regret.

I hope this makes some sense.

2 thoughts on “What Jara Bestows”