Yesterday, my son texted me at work and suggested spending Saturday together. He had a very specific agenda.

So this morning, I met him at his house, and we got the kids ready to head into downtown Boise so we could attend the annual Boise Veterans Day Parade (hence the image above). The parade has been held since before my family and I moved here 24 years ago. I can remember when my kids were in marching band in Junior High and High School, they’d perform in the parade each year.

We picked a corner near the start of the parade and met a lot of nice people, including a woman whose 13-year-old daughter was in it this year.

I took a ridiculous number of photos (and fortunately for you, I posted only one). The air was cool and crisp and if you were dressed properly, it was a great day to go to a parade.

Lots of marchers would break ranks to shake hands with the adults or high-five the kids. One guy was tossing out free throwing rings to any kid who wanted one.

My nine-year-old grandson could easily sit through the parade, but my three-year-old granddaughter is very active and very social, so I made sure to stick close to her.

All in all, it was a fine time.

When it was over, we drove back to my son’s house. By that time, my wife was there and had lunch ready for everyone.

Then, we headed out again (wife included this time) to the World Center for Birds of Prey. I first visited the over twenty years ago, and then again about ten when I was getting my third university degree and needed an upper-level science credit (I could attend a summer class at the center, write a paper, and *boom*, earned university credit).

It’s a non-profit organization dedicated to preserving endangered birds of prey. You can click the link and read all about it. They do really amazing work, and their primary project is the protection and recovery of the California Condor.

Anyway, they have live flight demonstrations for the audience sitting in a small, stone amphitheatre. Trained falconers work in pairs to call the birds to fly over the audience, giving us a very close look at six different raptors over a ninety minute period (yes, I was that close to the falcon in the photo. 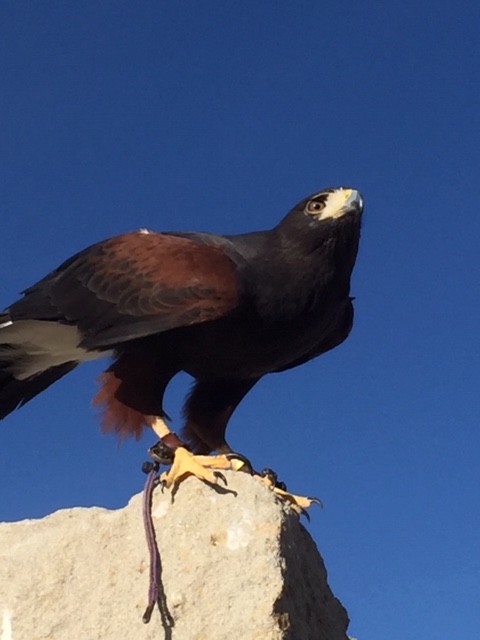 The birds flew barely an inch or more above your head at times, and one actually perch itself on a man’s head (fortunately, he was wearing a hat, because a raptors talons are unforgiving). The trainer recalled the bird very quickly, so the fellow was okay.

I got some good videos of their flights, sometimes just a few feet from my phone. It was pretty thrilling.

My granddaughter missed her nap, but she held up like a champ, even though she didn’t have the attention span to always attend to the birds.

We’d gone through other exhibits earlier, so the live flight demonstration was the grand finale, and the last one of the season.

It was great to be able to spend that much time with my son and his kids. I’m sure each of you have interesting stories to tell about how you interact with your own families (not that we do such things every weekend).

Well, that’s my excuse for not writing today.