From the teaser/trailer to “Ghostbusters 3”

Apparently, the whole “Ghostbusters” thing, the next movie in the franchise scheduled to hit the theaters in 2020 isn’t over yet. In fact, the controversy seems to be just warming up.

As you may recall, a little over a month ago, I wrote about the upcoming sequel to be directed by Jason Reitman, son of Ivan Reitman, director of the original 1984 film starring Bill Murray, Dan Aykroyd, and Sigourney Weaver. 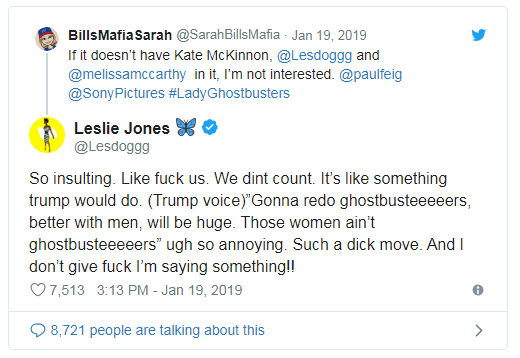 But the announcement that the 2020 film would be a direct sequel to the original, essentially bypassing the very badly received 2016 remake, made a few people angry, as if the younger Reitman’s vision was somehow a slight to that movie’s all-female cast in particular and feminism in general. In fact, actress Leslie Jones, who played Patty Tolan in the 2016 film, got on twitter to express her extreme displeasure (to put it mildly).

However, movie studios are in the business of making money. If they can create good and entertaining films while doing so, I’m really all for it. However, if a movie doesn’t do well, the studio is going to take a good, hard look at what went wrong, especially if the project had been part of a highly successful franchise, and try to fix it (as opposed to just trashing the franchise and moving to something new and original).

Last summer, I talked about the dangers of gender flipping, that is, taking a very successful film franchise that predominantly featured men, and casting the same roles with women. The idea is to create a more feminist oriented movie where an all-female cast might not draw a huge audience, and plug them into a franchise that is more or less guaranteed to earn tons of money.

However, with 2016’s Ghostbusters remake, that plan didn’t work so well.

So what happened now?

Jason Reitman gave an interview referenced in Vanity Fair and said the unthinkable:

Jason Reitman is staying the course to make a new Ghostbusters movie—but his latest remarks about the project are already kicking up backlash. In an interview on Bill Burr’s podcast on Monday, the Oscar-nominated filmmaker—son of original Ghostbusters director Ivan Reitman—said that the newest Ghostbusters will be a reboot that will “go back to original technique and hand the movie back to the fans.”

If you don’t read any further than that, you might come to the wrong conclusion (as apparently, many people have). Here’s more:

Reitman went into detail about said “original technique,” explaining that for the first teaser released in January, he used original files for the sounds of the proton pack and the original lettering that was used in the first film’s promotional materials. “We went back and found the original physical vinyl letters that they used to create the Ghostbusters poster in 1984, [and] rescanned them, then our titles guys reprinted them and we filmed the titles,” he said. “We shot physical titles with a light-and-smoke effect ’cause that’s how they would have done it back in the day.” 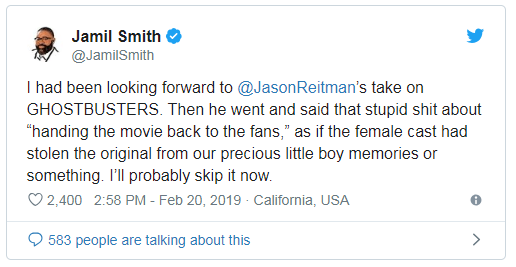 There’s a reason the 1984 movie is a classic. There’s a reason I watch it every Halloween and remain totally entertained by the story and the performances. There’s a reason the writing by Dan Aykroyd and the late Harold Ramis is magnificent, that in addition to Murray, Aykroyd, and Weaver, the performances of Harold Ramis, Rick Moranis, Annie Potts, William Atherton, Ernie Hudson, and the rest of the cast are top-notch and always compelling. If Ivan’s son can even begin to match such a terrific piece of film making, my hat’s off to him.

However, when he said ““go back to original technique and hand the movie back to the fans,” he “miffed” off a lot of people, and he realized it himself when he tweeted:

I honestly can’t say that the 2016 film was “an amazing movie” because I haven’t seen it. When the reviews came in, just like 2018’s Solo: A Star Wars Story, I decided against spending my time and my money (I even had the opportunity of renting “Solo” from my local public library for free and my visceral reaction was “no”).

So, I can’t actually judge the quality of the 2016 movie. Maybe I should take Reitman’s word for it, but then again, no matter what he says now, he’s already been “slimed” by the critics.

As you can see from the screen captures of the various tweets, some people are not pleased. Frankly, I’ve never heard of these pundits before (I guess that makes me a terrible misogynist or something), but I think they’re all missing the point.

For whatever reason, the 1984 Ghostbusters film hit a home run that still keeps on going. The 2016 film, not so much. Is it because the former had a male cast and the later had a female one? I doubt it. There are a large number of variables that determine a good movie from a bad one, and the gender of the leads is a very minor factor as long as the casting makes sense and the performances are good.

One of my sons who did see the 2016 film, and who is the most socially and politically liberal member of my family, says that the cast are incredibly funny and talented women, but they were saddled by the film’s bad writing and poor execution. I mean what actor hasn’t been stuck in a bad movie before through no fault of their own, right? 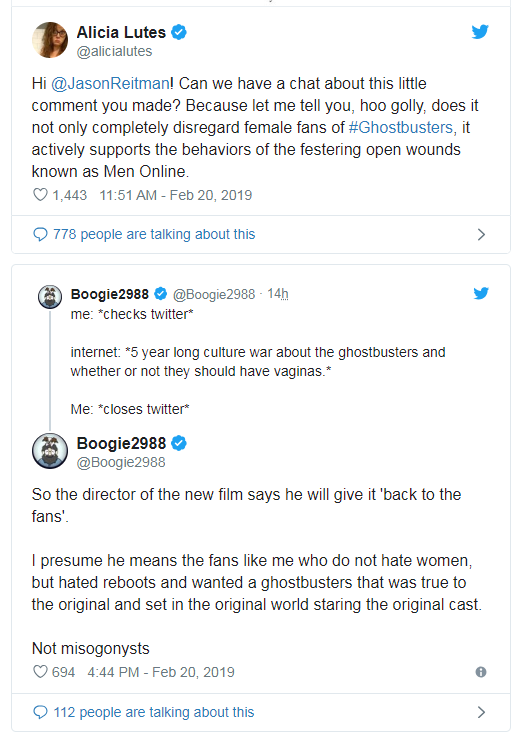 Unfortunately, the pundits can’t seem to see past their collective nose, and realize it’s not a sex/gender thing, it’s a film making thing. If you gender flip for its own sake and ignore good storytelling, depending on “oh look, it’s feminist,” to draw in big profits, you might not get the expected results. This is not because audiences are misogynistic, as Rian Johnson and J.J. Abrams suggested when some criticized the 2017 movie Star Wars: The Last Jedi. It’s because the writing wasn’t very good, and the social justice preaching was incredibly transparent. No one likes being lectured to when they’re expecting to be entertained. Yes, you can entertain and still get across a socially relevant point, but you have to both be talented, and respect your audience to be effective.

I can’t speak to the talent of the writers and filmmakers behind the 2016 Ghostbusters or The Last Jedi, but I can tell you, as a long-time fan of both franchises, at least relative to Last Jedi, I was not respected as a fan.

I think Reitman is actually saying he respects the fans and wants to make a movie reflecting such respect. If he wants to include a social agenda at the same time, I’m okay with that, too. Gene Roddenberry did that with the original Star Trek television series, and he created a phenomenon because the writing was good. Unfortunately, over 50 years later, the franchise has degraded, like so many others, such that it no longer respects the fans or the vision behind what made Star Trek great in the first place.

I know, just like my recent commentary on the movies Avengers: Infinity War (2018) and the upcoming Avengers: Endgame (2019), whenever I get “political” on this blog, the response is less than stellar (to put it mildly). I suspect my views sometimes offend people who are too polite to tell me what they think I’m full of. However, an interest in science fiction, fantasy, and good storytelling isn’t just about writing cute (and socially justifiable) stories. It’s about discussing the nature of the industry, both historically, and how it is evolving based on various social pressures and requirements.

It’s impossible to say all this to the relevant pundits in a series of tweets, so I’m saying it here and they can click the links I’m putting on social media if they so desire. There’s more than one legitimate way to view an issue, and someone has to talk about the difference between being unfair to disadvantaged groups and calling out bad storytelling.

10 thoughts on “Jason Reitman and the new Ghostbusters: Respecting the Fans isn’t Misogynistic”