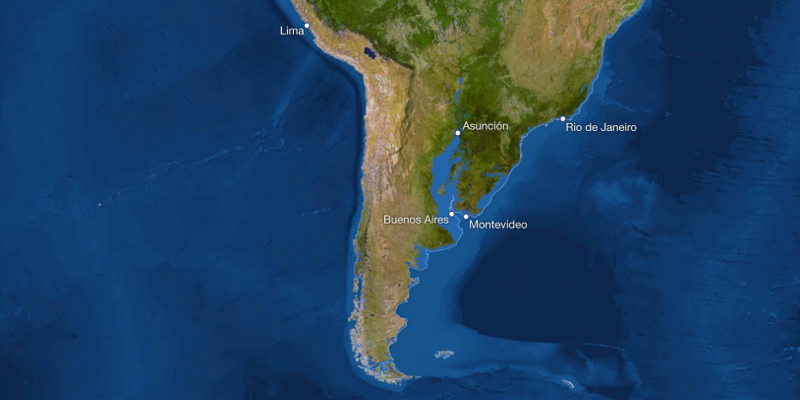 © National Geographic – projection of South America if all Earth’s ice had melted.

I’ve been doing a lot of marketing, progress updates, and reviews lately but not so much fiction writing on this blog. The reason is that I’m scrambling between writing the second draft of my first novel and writing and submitting short stories, hopefully faster than they are rejected.

Yes, I’m human, so having one of my tales not make the cut stings a bit, even though it’s totally anticipated and “normal.”

So I decided to regularly (not sure how regularly yet) post a passage from one of my rejected missives that is temporarily out of play for your enjoyment and consideration. Naturally, the excerpt isn’t the story, but maybe it will be enough of a hint to tell you if anything is a bit “off” about it or if you can suggest improvements.

Therefore, without further ado, this short preview from my short story “Ice.”

“You mean to do this, then?” Afternoon of the next day, both the Captain and his First Mate stood on the dock listening to Eralia shout orders from the Star’s main deck, and watching longshoremen bring crates, barrels, and nets of supplies on palates and mule-drawn wagons, loading them aboard and down into the holds.

“In all of our days together, you’ve always followed where I’ve led. Why question me now?” Yong turned to Andrada who was still looking at the ship, the bustle of the crew, the same men and women doing the same work they’ve always done, but for the Mindanao native, it was as if this would be their last voyage.

“A man, a seasoned sailor, killed himself just because he knew we were coming to see him. It bothers me.”

“We both know Chester Weaver. He’s a good man. You said so yourself.”

“That was a long time ago, a different life. We were fugitives, runaway pirates, wild adventurers and rogues. We went anywhere back then, and gave no care to any place or man.”

“Did you see something on that great continent to the south that would make you fear to return?”

“You can’t tell me you didn’t see strange things there, too.”

“Strange things, mysterious but wonderful. Certainly nothing to make either of us afraid.”

“We’re not young anymore, and you once told me you thought Weaver was looking for secrets no man should find.” Andrada turned to Yong, their faces only inches apart. “What if he found them?”

“Tulu! Tulu!” Even at dock, the Captain always kept someone at lookout high in the Crow’s Nest, and it had saved their lives before. Now the young cabin boy, Billy Brand, five years with the ship, was waving his thin arms, overgrown strawberry-colored mop scattering across his forehead as he jumped, “Damnit, Tulu!”

Everyone turned to look up in the direction the ten-year-old boy was pointing. From high out of the southern sky what looked like a massive flock of huge birds was rapidly approaching, but their bodies, their wings, how they moved through the air, made them unmistakably Pterosaurs what some called “Tulu,” and Yong had never seen so many clustered together in flight in all his days.

“Eralia, strike the sails, secure the hatches, and have the men drop, except for the sharpshooters,” Andrada cried.

“I know, they’re arming now.” The First Mate looked at her as she momentarily leaned over the rail, and then disappeared. He felt a pang of guilt that he’d been talking to the Captain when he should have been doing his job. Then he ran for the gangplank to make up for his mistake. “Billy!” The boy was still in the Crow’s Nest and there was no time to get him down. The leather wings were almost upon them as he yelled to the child, “Get as low as you can but stay in the Nest.” He saw Billy’s head duck away and prayed that his hesitation hadn’t just cost the boy his life.

Yong hit the planks along with everyone else on the dock. He yelled at a burly worker a few feet away, “What’s going on with the Pterosaurs?” The sea Captain chanced a look up to see the sky was full of them, though thankfully most of the fifteen foot long flying predators sailed just above the height of the Star’s masts, wingspans of over twenty feet bending with the wind. “Why are they here?”

Then everyone slammed flat against the rough boards as a juvenile dived the full length of the dock just over their heads, and then climbed in time to miss the kiosk and the nearby port buildings beyond.

“I don’t know,” the loader screamed back, his voice cracking with terror. “The whole town is regularly scented strong enough to repel even the big Velociraptors. Sometimes a small group from their nests in Tierra del Fuego will come this far north to hunt, but they never approach the port or the ships.”

Moments passed and the Captain realized the skies had again gone quiet. Up on his knees, then getting to his feet, he saw the flight climb and continue north. People caught outside in the plaza, on the nearby streets, in the markets, and on the dock around him, were picking themselves up. “Like they were more panicked than aggressive or hunting,” he said to himself. “But what could have terrified them so?”He spun and ran up the gangway to the Star.

2 thoughts on “From the Rejection Roster: Excerpt from “Ice””