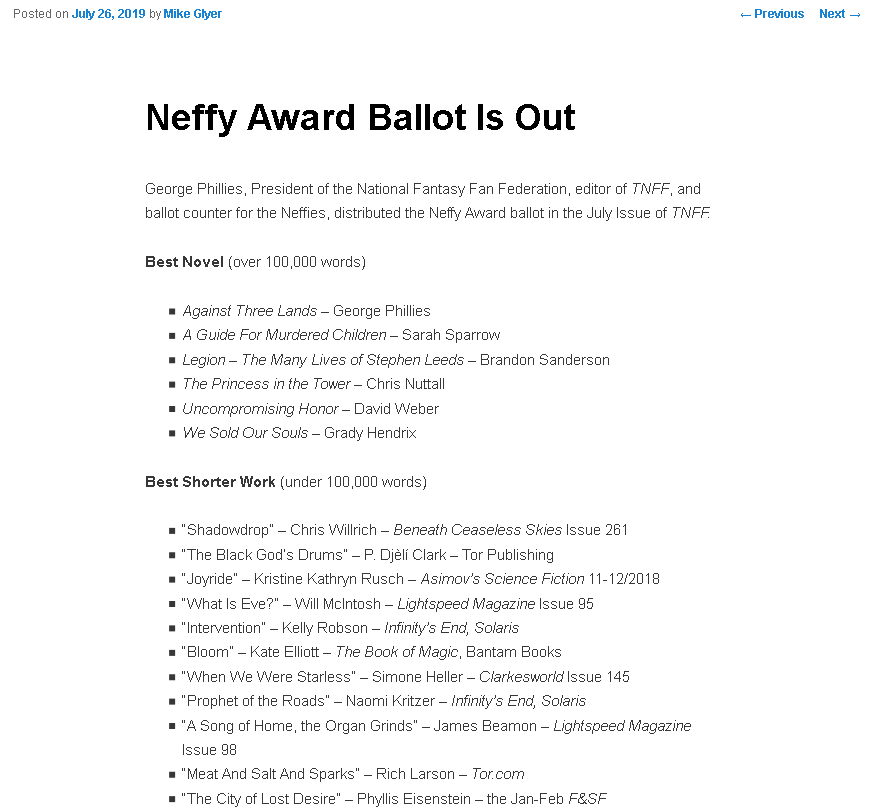 Having (finally) successfully subscribed to Mike Glyer’s File 770 online SciFi fan newzine, I find that most of what this rather prolific blog puts out doesn’t catch much of my interest. Of course, with WorldCon Dublin coming up next month, a lot of the content is focused there. They also put out a tremendous number of articles about various awards, again, most of which I don’t have an interest in.

However, I did pause to read Neffy Award Ballot Is Out. I’d never heard of the Neffy Awards, so I looked them up.

But before that, I took a look at the ballot, which lists science fiction and fantasy works nominated in a number of categories. They include Best Novel, Best Shorter Work, Best Book Editor, Fanzine, TV Show, Movie, Anime, and so forth. Needless to say, I didn’t recognize any of the names and most of the category entries. Oh, I have heard of “Game of Thrones” and I used to watch “Supergirl,” but that was about it. This reminded me that as a “fan,” I’m probably really lacking in keeping up with what’s current (to find out what I’ve been reading and watching lately, go to my Reviews page).

After reading the “File 770” article, I went to the “Neffy Awards” site, which describes itself as:

National Fantasy Fan Federation Speculative Fiction Awards, called the Neffy Award, has been awarded annually since 2005, and on occasion under different names since 1949, for works from the previous year. The award categories fluctuate from year-to-year with new categories being added and old ones dropped according to nomination votes.

Except for the aforementioned TV Show “Supergirl” (which the awards seem to love a lot) and the name “Jean Grey,” I had to go back a few years before I saw the names of authors I’m familiar with. Oh yes, they mentioned the film “The Martian,” which I adore, and a variety of other movies and TV shows, but I had to go back to 2009 before I recognized an artist (Frank Frazetta) and an author (Stephen King).

Not sure how various works win these awards, but of those I’m familiar with, there seems to be a mix of “yes, I’d agree,” and “no, not even.” For 2017, “Thor: Ragnarok” is listed as best film, and I admit I really did enjoy it. “Supergirl” won best TV show in 2016 and 2017, and while I enjoyed the program while I was watching it, I don’t know if I’d say it was absolutely the best SF/Fantasy show on the air (but I don’t watch that much TV, so how would I know?).

In 2009, the JJ Abrams film “Star Trek” won Best SF Movie, which I kind of have to disagree with, although for the previous year, “The Dark Knight” won, which I can totally agree with.

All I can say is that a lot of other people seem to have much more time than I do in order to consume that much print and video fiction.

Oh, interestingly enough the only movie nominated for Best SciFi film of 2018 was A Quiet Place, which deffo doesn’t seem like my kind of movie. Personally, if they accept superhero movies such as “The Avengers” (which one Best SciFi movie for 2012), then I’d have nominated “Black Panther.”