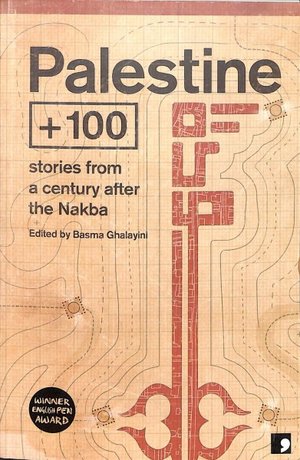 I found a link to the book review Palestine + 100′ Explores Contested Territory, Past And Future at Mike Glyer’s File 770 and was intrigued. Apparently, Palestine + 100:

…poses a question to twelve Palestinian writers: what might your country look like in the year 2048 – a century after the tragedies and trauma of what has come to be called the Nakba?

The reviewer, Amal El-Mohtar is the Hugo-award winning author of “The Honey Month” and writes the Otherworldly column for the New York Times Book Review according to the blurb on NPR. Among other things, she states:

The choice of subtitle — “stories from a century after the Nakba” — exemplifies this, drawing attention to the fact that for Palestinians (and many Israelis), May 15, 1948 is not a date to celebrate, but to grieve.

In case you didn’t know, May 15, 1948 was the date when Israel declared it’s independence from British rule and was established as a Jewish state.

The book hasn’t yet been reviewed at Amazon.co.uk, but received two favorable reviews on the U.S. site for Amazon.

I’m going to state for the record that this isn’t the sort of book I’d even think about reading let alone contributing to. Then again, since it was only open to Palestinian writers, my submission would be dismissed out of hand. It would also not be accepted because if I projected Israel a hundred years after it’s liberation, I would craft an entirely different vision for the Jewish state.

Actually, I have mixed feelings about this anthology. On the one hand, I do believe that everyone can and should have a voice in science fiction and fantasy. My understanding is that there’s a growing number of talented SciFi authors in China who are looking for expression in the wider world of fandom. So why not Palestinian writers?

On the other hand, with a bias this strong and specific, the “opportunity” to promote antisemitism, Jew hatred, and even the genocide of the Jewish people could easily spark new animosity in at least some of its stories, and further increase whatever divisions there are between the Arab and Jewish populations in Israel.

Could you imagine an anthology called “Israel +100” which featured tales about the future of a Jewish Israel a century after liberation? The book would be almost universally panned, labeled as racist and “hate speech,” and probably the authors and editors would be at least harassed if not actually receiving death threats (anybody remember how Iran’s then Ayatollah Khomeini issued a fatwa calling for the death of author Salman Rushdie after he published his novel The Satanic Verses?).

The book was published at the end of last July, so it’s a reality. The sales numbers don’t look too impressive, but then again, it’s targeting a rather specific audience. General SciFi readers probably wouldn’t go for it unless they bought and read the book based on solidarity with the Palestinian people or to rub Israel’s nose in their supposed “occupation.”

I know that having a Jewish wife and children and being pro-Israel (no, I don’t think the Israeli government is perfect, but the Jewish people have a right to their own state), I certainly wouldn’t shell out my hard earned money to read twelve stories that (well, probably some of them) predict the end of Israel.

I must admit that the closest I’ve come to writing a pro-Israel science fiction story is the as yet unpublished “Saving the Apostle,” but it’s a time travel story set in the first century C.E. It hardly mentions the modern state of Israel, except to reference how the rise of today’s version of Christianity had led to every nation in the world waging a war against the Jewish nation (my time traveler comes from the near future).

Now I kind of want to write a story called “Israel + 100,” but I seriously doubt anyone would publish it. Also, I’m not an Israeli or a Jew, so maybe those voices would be better contributors.