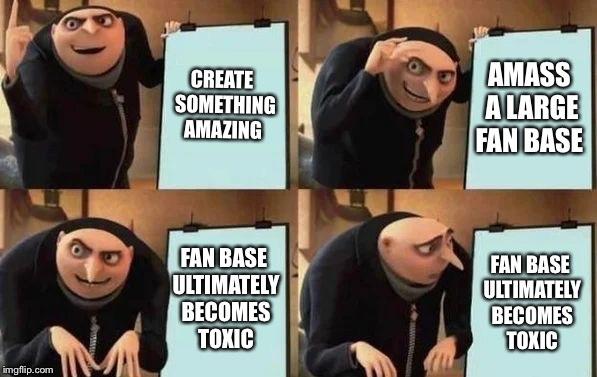 Oh heck. I wasn’t going to comment on this here. Seriously. I admit, when I saw the title of the File 770 article Fandom, Entitlement and Toxicity I had a pretty good idea of what it was all about. When I saw the author was my old “friend” Hampus Eckerman (really, we’ve only had brief online encounters, but they were pretty unpleasant) I was sure of it.

Turns out I was wrong.

What Eckerman was really saying was that his “ownership” of certain characters and franchises, he focuses on “The Amazing Spider-Man” comic book, can lead us as fans to respond pretty badly at times when the creators of these pieces of work do something that rubs us the wrong way.

I certainly feel that way about some of the modern incarnations of Star Trek and Star Wars. Unlike Eckerman, I stopped reading Marvel comics somewhere in the 1980s and DC at the end of the 1990s. Oh, I go back to my favorites sometimes, but for me, that was the 1960s when Marvel first became King. By modern standards, the stories might seem simplistic, but this was the period in comic book history that laid the foundation for everything that followed, including Marvel Studios’ amazing success on the big screen.

Eckerman didn’t really say anything we don’t already know about ourselves and each other. We have our sacred cows and when somebody tips one (Google “cow tipping”), we get upset. We can even get pretty self-righteous about it. I know I can.

Then the other person who went out of her way to harass and insult me on Glyer’s fanzine said:

The bitter, fanantic hatred expressed towards the Thirteeenth Doctor’s gender proves the male fandom has rivalled the Rabid Puppies for its outright lies including that the ratings had plunged through the floor when in fact they had in fact greatly increased during her time as the Doctor.

Their newest lie is that she has resigned as has the showrunner. –emph. mine

Somebody just had to mention the “puppies.” As my long suffering wife might say, “Oy.”

If you want to talk about “deeply entrenched toxicity” as Cam put it, you might want to start with not only calling out the “other guy” (who hasn’t been an issue for a few years now to the best of my understanding) but your own involvement. Eckerman, to his credit, owned up to how his emotional involvement in Spider-Man’s development over time has resulted in toxic responses.

Actually, I’m not sure toxic is the right word, at least not always. What about “disagreement?” Sometimes, when I’m called “toxic” or “racist” or “wrong” or “dishonest,” when I examine my intent, what I was trying to say was that “I disagree with your (or somebody’s) opinion.”

I’m occasionally called out about my viewpoints on how Star Wars and Star Trek have been treated in the last several years. It’s true, I tend to be attached to the older versions. I don’t think the original vision of these franchises was preserved as they moved forward in history.

But that’s just my opinion. Others can feel free to disagree. I don’t mind. At the end of the day, we’ll still disagree and that doesn’t have to mean anything bad.

As far as Doctor Who and sexism, I’ve never been a fan of the show, so I’m pretty uninformed. Oh, I tried watching a few episodes back in the Tom Baker days, but I could never make a connection. I know it’s wildly popular now, but I’m not going to start watching it (or GoT or anything else) just for the sake of watching it.

Depending on who you talk to, the “peaceful co-existence” between politically diverse SF/F fans exploded in 2015 and the events that led to the “puppies uprising” (for lack of a better term). I don’t have any skin in that game since I returned to fandom afterward, but it obviously had a lasting effect.

The DC Worldcon in 2021 (or is it 22?) will have Baen chief editor Toni Weiskopf as a Guest of Honour which hopefully should help heal some wounds.

I don’t have enough background to know how she would help, but it does touch on something I think fandom needs: healing. Of course, everyone’s going to have to agree to a truce (except those who can’t because they tend to hang onto anger forever…they just need to stand aside and listen), and then to admit that disagreeing with someone doesn’t make them evil.

In my opinion, for SF/F, both the creative folks involved and the fans, to grow and thrive, it needs to be diverse. I mean diverse not in the popular definition, but in the sense that no one political or social ideal or ideology is represented. No, I’m not extending an invitation to the Alt-right, white supremacists, or the Nazi party, but the opposite extreme can be just as toxic.

I suspect if most of us sat down together over a cup of coffee, tea, or a beer, we’d still disagree, but we might also find a way to get along. Toxicity can check itself at the door.

Oh, in doing a search of appropriate memes for this article, I Googled “toxic fandom.” Turns out there’s tons of articles on the topic, so my wee missive as well as Eckerman’s longer piece aren’t unique. Check out Bearded Gentlemen Music. I decided not to use the image by Ricky Vigil to respect his creative rights. Found something more generic instead.

6 thoughts on “In Response to “Toxic Fandom””