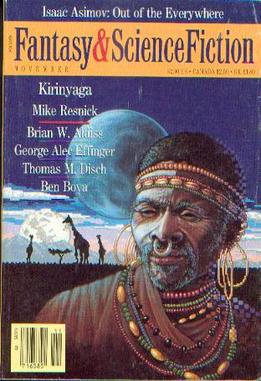 I first heard of the late science fiction author Mike Resnick in Louis Antonelli‘s response to Jaym Gates‘s Facebook complaint about him (and later, her twitter rant). I never really got to the core of her animosity toward Resnick and many other major SF/F writers, but I did chronicle my experiences, including her blocking me on the aforementioned social media platforms.

Oddly enough, Gates and her followers were the only ones who seemed to have issues with Resnick. Every other source of information I could find about him, including the File 770 fanzine, spoke quite highly of him.

Anyway, I settled on the Hugo award winning short story Kirinyaga, which he later developed into a novel by the same name.

Resnick originally wrote it as a submission to an anthology that was to be edited by Orson Scott Card, but the anthology never materialized. The theme was to be about stories dealing with developing a utopia. Resnick chose a reconstruction of an African savannah developed on a terraformed planetoid.

He illustrated, in some sense horrifically, how keeping tradition and creating utopia was a matter of perspective. Just how far would you go to preserve your historic way of life? What if your traditional practices were, in some cases, macabre and terrifying? What if, from another culture’s point of view, they were even criminal?

That’s what the short story delves into. It wasn’t what I expected. Originally published in The Magazine of Fantasy and Science Fiction in November 1988, in addition to winning a Hugo, it also won the 1989 SF Chronicle Award and was nominated for the 1989 Nebula Award for Best Novelette as well as the 1989 Locus award.

It was also too short for me to get a definitive sense of Resnick’s writing, but from his unique treatment of his topic, I want to read more.