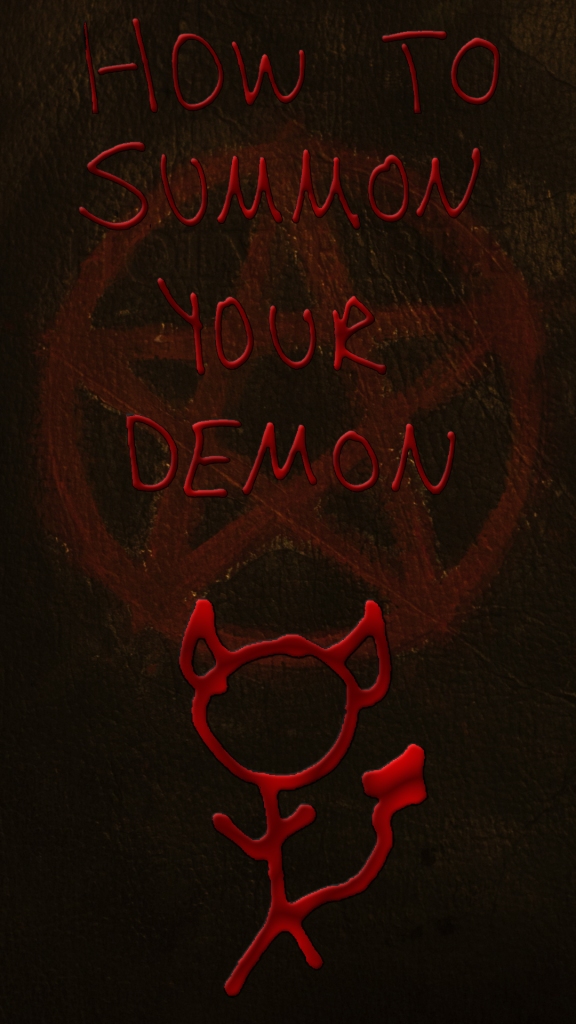 Promotional image from the 2018 film “How to Summon Your Demon”

“What, were you expecting a cauldron?” Dorothy’s voice communicated her indignation at her younger sister Emily’s surprise.

“But a soup pan on the stove?”

“All the recipe calls for is a metal container that’s heated.”

“But a soup pan on the stove. That’s how you’re going to summon a…”

“Not another word.” Twenty-seven year old Dottie pressed a pale, stiff index finger against Emily’s pouting, ruby lips. For an instant, she felt a forbidden thrill at touching her sister so intimately, but then realized it was probably just the fumes from the potion affecting her. On the other hand, she did find Emily kind of hot.

Then her eyes flickered downward for an instant catching a glimpse of Em’s full, supple breasts resting comfortably under her U.C. Berkeley sweatshirt. Dot had always been jealous that her sis, four years her junior, had been so graced when all she had been granted were “B” cups.

“You really are the worst witch I’ve ever heard of.”

“But you have heard of me,” Dot quipped in her best Johnny Depp.

“Only because you’re my sister and I’m stuck living with you over the holiday break.”

“Pity the dorms shut down and all the kiddies were sent scurrying home.”

“Look, if you don’t like me staying with you…” Em’s face went flush with anger.

“Relax.” Dot raised her hands in a gesture of peace. “I didn’t say that, it’s just…”

“That we never got along, even as kids. If only…”

“I know. But Mom and Dad died. Now we only have each other.”

Chagrin crossed Em’s features. “Sorry I insulted you about the potion and you’re being a witch and all.”

“Yeah. I’m sorry I snapped at you too. Don’t tell me this means we’re both growing up?”

They shared a laugh and hugged, probably for the first time since their parents died of COVID ten years before.

“First of all, you have to swear to be at the ceremony at midnight tonight.”

“New Year’s Eve? But I was planning to…”

“Plan again. You don’t want to miss this, not even to go on a pub crawl with your friends.”

“Pub crawl, I was planning on getting laid.”

“You can screw some other time, this is more important.”

“Easy for you to say, the last time you had sex was…”

“Never mind that now. You said you wanted to know how the potion would be used to summon, well you know.”

“Yes,” Em muttered meekly, forlorn at the thought of another orgasm she wouldn’t have.

Emily internally debated for several seconds, but curiosity won out against drinking and casual coitus. “Yes, I swear.”

“Fine. Keep stirring this on a medium heat for the next thirty minutes, then turn off the stove and let it cool.”

Five minutes until midnight. Emily entered the living room of her sister’s third floor apartment on the northeast corner of Oxford and Cedar. She was dressed in the form-fitting ebony gown her sister had laid out for her in the spare bedroom. Dot’s insistence that she wear neither panties nor bra, and that virtually every detail of what lay under the gown felt prominently displayed did nothing to relieve her discomfort. She was fairly certain her sister was lesbian or at least bi, but it was disturbing to think she might also be entertaining an incestuous encounter.

Dot was kneeling in the center of the living room, in the same attire as Em, creating a large circle containing a pentagram with a dark liquid she was pouring from a glass beaker.

“All over the carpet? The superintendent’s going to be pissed.”

“I’m planning on having him killed in the morning so don’t worry about it, Em.”

She hoped her sister was kidding, but with Dot, you could never really tell.

“Is that the potion?” Her sister was just completing the design.

“Don’t be stupid. I need all of that for the summoning. This is the blood of…”

“Okay.” Emily raised one hand as if fending off a knife attack. “I don’t want to know.”

“Fine. The pot’s still on the stove. Go fetch it for me.”

Em flinched at the word “fetch,” remembering that horrible time when she was five and Dot was nine. Dottie had put the dog’s collar around her throat, stripped her naked, and forced Emily to play “fetch” in the backyard for fifteen minutes before their Mom came home from the store and put an end to it. Mom and Dad grounded Dottie for a month, and spoiled Emily with ice cream and cookies for the equivalent time. It was only one example of Dot’s sadism and the sisters’ depraved rivalry.

Emily pushed the unpleasant memories aside as she carefully took the pot by the handle and carried it to the middle of the living room. “Here.”

“Set it down in the center of the pentagram.”

“The whole pot? I mean, it’s Revere Ware. Mom used it to make hot cocoa for us when we were little.”

Emily noticed a wistful expression cross her sister’s face for a moment, as if she were recalling one of the few times when their family knew peace and even love. Then it vanished.

Em gingerly deposited the pot right where her sister had indicated.

Dot glanced at the clock on the microwave. “Only two minutes left. We have to hurry. Sit over there on the south side of the circle. No cross-legged. I’ll sit on the north.”

Emily was thankful that the folds of her gown concealed the openness of her “womanhood”and was surprised to feel a sense of moistness. Did she have latent feelings for her rather disturbed but definitely attractive sister? Dot was dark-haired, pale skinned, and thin, like a ballet dancer. Em, assessing her own appearance, was by contrast, honey-blond, much more curvy, medium complected, and with a rack to die for (which was the source of many admiring looks from men and a great deal of back pain for Emily). Physically, they couldn’t have been more different. Maybe Mom had an affair and got pregnant with one or the other of them. Would that make it okay for the two to have…

Dottie started a chant in some language that to Emily sounded like gibberish. Her eyes were closed and the index finger and thumb on each hand were touching while the other three fingers were extended. She seemed like some sort of half-assed guru, hundreds of which plied their ridiculous trade and teachings all across Berkeley and the rest of the Bay Area.

Then Em gasped as the dark green liquid in the pot began to boil. She could smell the same sickly odor it had emitted while it had been cooking this afternoon, but there was no reason for it. Oh, there was one, and it meant that Dorothy was a much better witch than Emily had dared to admit.

A mist was forming around them, subtly at first, but then it was rendered as a deep, moist fog. Would it set off the smoke alarms?

Then, just as Dottie reached the climax of her spell (and Emily strangely felt a strong arousal in her own loins), a billowing figure formed at the center of the circle, as big as a man, but with a much larger male member than Em had ever seen before. Maybe she’d get laid tonight after all.

The ceremony seemed to have taken forever, but then in the distance, the clock tower at one of the few remaining churches sanctioned by the state began to chime midnight. At the same time, she could hear fireworks being set off in celebration of the arrival of 2031. It was the five year anniversary of the Socialist States of America, and President-for-Life Kamala Harris was expected to give a landmark speech. Emily had originally planned to listen to a recording some hours later after her liaison with hunky Mark Pliskin, but the demon seemed so much better than both.

The creature had an upper body like a man’s, six pack, massive pecks, face of a god accented by ram’s horns, sporting an intensely erect “schlong” fully twelve inches long and beneath that, goat’s legs ending in hooves. It laughed like an insane jester, spreading its arms wide. Em tried to get its attention by wiggling seductively (the friction “down there” felt good but increased her frustration), but it seemed interested in neither her nor Dottie. It giggled heavenward, eyes rolling back in its head.

The thing was still hard to see in all of the smoke, but then it swiveled its head first gazing at Dot and then Em. “So this is what you wanted, eh?” The sisters hadn’t expected such an imposing figure to speak with the voice of Mickey Mouse. “Yes, oh witch, you desired power and access to a greater magic, thinking that I must provide both to you. No, summon me you can but command me you cannot. You think you’re alive and safe? Think again, for I have my own purpose!”

A balloon loudly popped as the demon exploded. A cloud of fine mist filled the air mixing with the fog and Emily could just make out the shape of each tiny particle.

“Oh no.” She had just finished a class in pandemic history as part of her Biology major. She knew the distinctive characteristics of the COVID-19 virus. Then she found it suddenly hard to breathe. The curse was back. Now if only she could figure out who had conjured it up the last time and how the spell had been finally reversed.

I wrote this for Mindlovemisery’s Menagerie writing challenge First Line Friday. The idea is to take the presented sentence and use it as the first line in a poem or short story. Obviously, the first line is “What, were you expecting a cauldron?”

Basically, I just started writing with only the vaguest plan of where the story would go and how it would end. I set the story in an apartment my wife and I once lived in at Oxford and Cedar in Berkeley in the early 1980s.

Yes, it’s irreverent and pretty gloomy with a side of whimsy. Kind of how I’m feeling on the first day of 2021.

To read other stories based on the prompt, visit Mister Linky.

6 thoughts on “This Time the Curse Comes from Berkeley”