Promotional image for the anthology “Spring into SciFi 2021”

It came by UPS today. It’s one thing to sell a story and another thing to hold it in your hands.

My short story “Wayback” is featured in the Cloaked Press anthology Spring Into SciFi 2021. I’m extraordinarily fortunate to be published in three of the four volumes in this series, and am thankful to the fine folks at “Cloaked” for their graciousness.

“Wayback” is the very first tale in my personal series with stories set in the same universe found in The Mechanical Dragon in the Zombie Pirate Press anthology ClockWork Dragons, The Deseret War found in the Immortal Works anthology A Mighty Fortress, and mentioned in my soon to be published novella Time’s Abyss

But before all of them, came “Wayback”. Here’s how it all began:

Herbert George Wells stood in the cellar of a brownstone in Kensington, knowing that he would never see Amanda again. Holding his beautiful lover, sixteen years his senior, tightly in his arms, through teary eyes, he gazed at the object of her own invention. Illuminated by gas lamps, it was resting in the center of a brick-lined room, cluttered with tables containing chemicals and laboratory equipment. The floor was littered with tools, stray bolts, and metallic sheeting, all used in the construction of her time machine.

“Take me with you,” he murmured into her auburn hair.

Amanda Westcott turned her head, resting it against his chest. “Your life is here. Mine is in another world.”

“But if it works, you will re-create the world in your image. Can you at least come back to me when you are finished?”

“You won’t remember me, my love, but without you, I would never have acquired the means to correct a terrible wrong.”

“I would not deny you justice, but was I merely a tool to an end?”

“Because I needed your help liberating my father’s prototype from where it has been languishing?

“We’re not three blocks from the Normal School of Science.”

Amanda looked up at Herbert, and he was again startled by her vivid green eyes.

“I love you my young scientist, so I won’t lie.” She placed her hand softly on his cheek. “Restoring my father’s legacy is everything to me.”

Herbert drew her lips to his, pressing Amanda’s robust figure against his slender frame.

Then she broke away. “No lingering farewells.”

He took several steps backward, memorizing her appearance. Amanda’s hair was suspended high around her head. Her alabaster-colored blouse was in contrast to medium complexion. During their months-long affair, he had seen far more of her skin, and enjoyed her pleasures lasciviously.

The engineer turned toward her time machine. To Herbert, it resembled a sled sporting a plush velvet couch, sitting behind a series of brass controls he found totally baffling. After the pilot’s seat, the power source, a glowing metal cylinder the size of a large flagon of ale, was at the rear of a large upright copper disk the height of a man.

She looked once more at him and mouthed. “I love you,” and then took the control seat. “You had best leave now.” Amanda manipulated the levers and knobs. Steam hissed out of the piping, as the disk hastily spun up to a screaming wail.

Fighting back sobs, he scampered up the stairs to the ground floor. Swiftly donning his jacket and hat, he dashed outside, trotted down the steps, and stopped when he was across the deserted street.

It was a dawn in early Spring. He shivered as he looked back at Amanda’s inherited home. There was no sign, but he knew she had departed to whatever fate awaited her. Wells shoved his hands into his pockets and made the forlorn walk to school through choking clouds of fog and smoke.

Get your copy of Spring Into SciFi 2021 today. A time travel and steampunk tale at its finest. 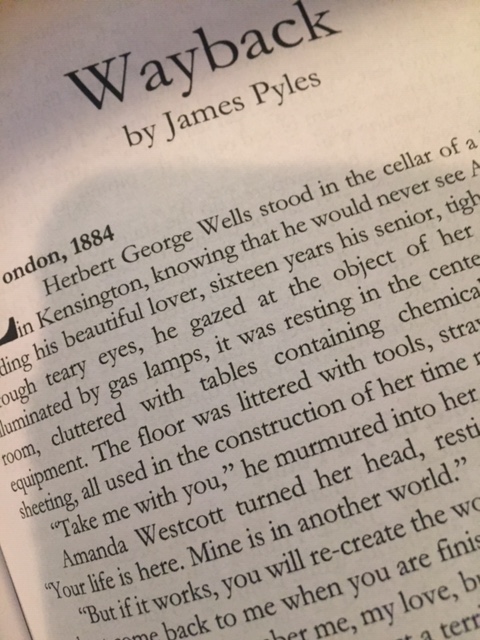 Promotional image for the anthology “Spring Into SciFi 2021”