So I was on the writing subreddit and I found a link to something called 404 Words which all short story writers should start paying attention to, especially if you are looking to get published with the possibility of winning $200.00 USD.

You can find out who they are on their About Us page, but more importantly, click the next link to find out about their contest.

They are accepting fiction story submissions until September 1st (I know, not much time left). All accepted stories will be published on their site, and the author of the top submission wins $200.00.

The contest is international so anyone in the world can enter, however all stories must be submitted in English.

The other trick is all submissions must have a word count of no more than (you guessed it) 404 words including the title. Click the link I provided above for the rest of the details.

I just thought I’d throw this out there in case any authors visiting my blog have a short fiction story 404 words or less ready, or you can put one together very quickly (actually, they’ll accept up to 3 submissions per person).

Just spreading the love. I submitted one story already and I’ve got five more days to decide if I want to write one or two more.

Cheers, and if you submit a story or stories to them, good luck.

I recently submitted an original story (one that hasn’t appeared on this blog) to a website that publishes flash fiction of a thousand words or less. Wow! Less than a thousand words for an entire story. That was a challenge.

I took a creative writing class in high school (back at the dawn of time when dinosaurs ruled the Earth), and we called those kinds of stories “short shorts”. You start writing a story as close to the ending as possible.

Anyway, I cranked out my story and it came out to just a few words shy of a thousand in the final draft.

I’ve noticed that when I write something for (potential) publication on another person’s site, I really have to go over the story again and again to shake out all the flaws. I’m a tad more lax when I’m posting my wee tales here on “Robots,” probably because I’m impatient and hey — I’m the site owner. I just want to write and press the “Publish” button.

So, I went over “Killing Juliet” repeatedly until I thought I had it in really good shape. Then I followed the publication instructions laid out on the publishing site I had found and sent it in.

Part of the instructions said it would take up to thirty days for a response, so I figured I wouldn’t hear back from anyone until the end of August.

When I woke up this morning, I was surprised to see an email from the publisher. Basically it was “interesting concept but not a good fit for us.”

I clicked “Reply,” typed the one word response “thanks,” and hit “Send.”

But I couldn’t leave it alone.

END_OF_DOCUMENT_TOKEN_TO_BE_REPLACED 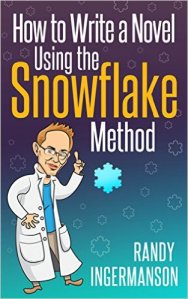 I was reading Malcolm the Cynic’s latest blog post when he introduced me to a new concept: snowflaked.

More accurately, he was discussing how he’s developing his most recent novel and provided a link to the “Advanced Fiction Writing” website, owned by theoretical physicist and award-winning author Randy Ingermanson. The link led to the article The Snowflake Method for Designing a Novel.

Since I’ve been somewhat preoccupied with designing my first novel, I was definitely interested. I haven’t gone in search of any support documentation on how to write my novel up until now. I have a pretty good idea of all of its component parts. It’s just a matter of organizing. But maybe I need some help in doing that.

Ingermanson’s ten-step guide is long and I’ve only skimmed some parts of it. Step one says:

Take an hour and write a one-sentence summary of your novel. Something like this: “A rogue physicist travels back in time to kill the apostle Paul.” (This is the summary for my first novel, Transgression.) The sentence will serve you forever as a ten-second selling tool. This is the big picture, the analog of that big starting triangle in the snowflake picture.

By the way, that’s an intriguing premise. What would happen to the world if the Apostle Paul were killed before becoming a disciple of Jesus and Christ’s emissary to the Gentiles? Would Christianity even be developed? Unfortunately, the book as mixed reviews. Fortunately, it’s currently free for Kindle.

I had a hard time creating a single sentence describing the whole novel I have in mind. After some thought, I came up with this…

END_OF_DOCUMENT_TOKEN_TO_BE_REPLACED 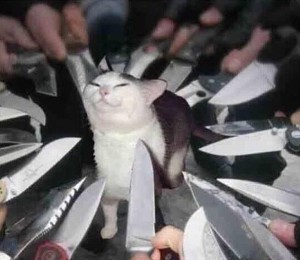 Of course, the same can be said of science fiction in general, but the number of people who will read the latter is probably much larger than those who would read the former.

That said, sources such as Amazon and Wikipedia highlight a great number of science fiction stories that leverage religious themes, but these are sometimes fictional religions rather than ones we are aware of in our world, or very fictionalized versions of religions we’re familiar with in our lives.

I came across an interview with Orson Scott Card at Writing-World.com that reminded me that in most fiction, including science fiction, religious people and religion (specifically Christianity and Judaism) are depicted in unfavorable ways.

END_OF_DOCUMENT_TOKEN_TO_BE_REPLACED

This short story originally appeared on the A Million Chimpanzees blog, the first BlogSpot I created. I’ve since launched Powered by Robots as an exclusive venue for my short story writing. To find out more, please visit my page. Enjoy.

The initial event that resulted in my most ambitious fiction writing project to date happened a few Sundays ago over coffee with my friend Tom. He mentioned a book he wanted to read, an anthology edited by Anthony Marchetta called God, Robot. This is a collection of stories based on the premise of Isaac Asimov-like Positronic robots that have been programmed with two Bible verses rather than Asimov’s famous Three Laws. These verses are recorded in the New Testament in Matthew 22:35-40 and Mark 12:28-34 and are based on Deuteronomy 6:4-5 and Leviticus 19:18.

I’m a long-time fan of Asimov’s robots stories and have always been fascinated by the interplay between the Three Laws and how their potentials shifted due to certain situations, rather than remaining hard absolutes. This allowed Positronic robots to be unpredictable and thus interesting, challenging the human beings who sometimes found themselves not in control of their creations.

I started to imagine what it would be like to write such a story. I went online, found Marchetta’s blog, and contacted him, asking permission to write such a story on my “Million Chimpanzees” blogspot. To my delight, not only did he consent, but he said he was flattered at the request.

What follows is the result of my labors. I’ve probably spent more time writing and editing this short story (about twenty pages long when copied into Word) than any of my previous efforts. I’m sure it still needs much improvement, but I’ll leave it up to whoever reads it to let me know what I could do better.

At the end of the story, I’ll relate more about my influences and a few other insights.