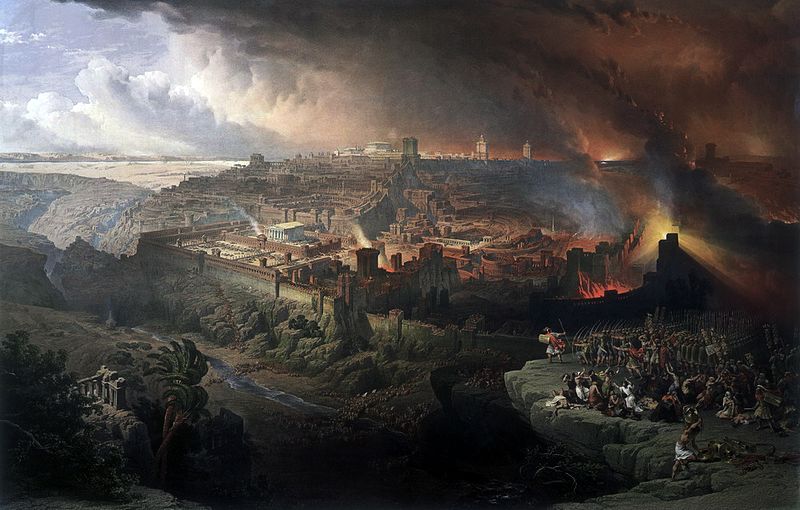 David Roberts’ The Siege and Destruction of Jerusalem by the Romans Under the Command of Titus, A.D. 70

The group of men entering the synagogue at Terni caused murmuring among the Jewish men and not a few of the women. Everyone’s hearts sagged with news of the fall of Jerusalem and the destruction of the Holy Temple of Hashem by the Romans. These men had been there. They were refuges forced into the diaspora. How long had it been since any of the Terni Jews made the journey to the Holy City to offer Korban to Hashem?

After the reading of the Torah and the Prophets the synagogue officials sent to them, saying, “Brethren, if you have any word of exhortation for the people, say it.”

Yochanan stood and said, “Men of Yisrael, and you who fear Hashem, listen. Hashem has brought to Yisrael a Savior, Yeshua Ben Yosef, after Yochanan had proclaimed before his coming a mikvah of teshuvah to all our people and even the Goyim.”

I wrote this for the What Pegman Saw writing challenge. The idea is to take a Google Maps street image and location and use them as a prompt for creating a piece of flash fiction no more than 150 words long. My word count is 150.

Today, the Pegman takes us to Terni, Italy. Like most places in Europe, Terni has a rich history going back to ancient times. Wikipedia says Terni was founded around the 7th Century BCE and was conquered by the Romans in the 3rd Century BCE. I have no idea if in the late First Century CE there was a Jewish population and a synagogue present, but I pretended there was.

After the Romans destroyed Jerusalem and the Holy Temple in 70 CE, there would doubtless have been countless Israeli refuges who were forced into the diaspora (exile among the nations). The Jews who had long lived in the cities and nations in the Roman empire would have journeyed to the Holy City only rarely because of the distance and difficulty in traveling in those days, so seeing a group of their Hebrew brothers arriving from the recently destroyed Jewish capital would have caused quite a stir, but there’s more than that.

It is a common belief in Christianity, Judaism, and even among other religions and in atheism that Jesus and then the Apostle Paul created a new religion called “Christianity” and converted many Jews and many more Gentiles to it. It is often thought that the Law (Torah) and all of the Jewish customs and traditions mandated by God were “nailed to the cross with Jesus.” My studies have convinced me that nothing could be further from the truth for the Jewish people.

The group of men from Jerusalem in my story are devout Jewish followers and disciples of Yeshua (Jesus) the foretold Maschiach (Messiah) and many witnessed him after the resurrection and then they told many others.

I borrowed a bit of Acts 13, specifically verses 15, 16, and 23 to put words in the mouth of my fictional Yochanan (John). Although Jewish devotion to Yeshua eventually fell away, we are unsure of just how many years or centuries such Jewish faith in him continued, perhaps even into the 3rd Century CE and beyond. No one knows for sure. However, that devotion would be a wholly Jewish extension of Pharisaic belief, not something that had no resemblance to its root source. That’s what I tried to communicate in 150 words.

For the sake of my narrative, I used a classic painting of the siege of Jerusalem above rather than an image associated with Terni, Italy.