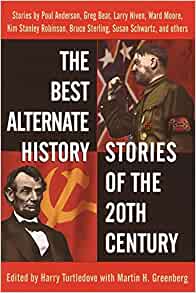 Cover art for the anthology, “The Best Alternate History Stories of the 20th Century

I’ve been reading the anthology The Best Alternate History Stories of the 20th Century edited by Harry Turtledove and Martin H. Greenberg. The edition I have was published in 2001. I checked it out of my local library, and besides a bit of water damage, it seems to be missing the table of contents.

The very first story presented is Kim Stanley Robinson’s The Lucky Strike (1984). The premise is what would have happened if Paul Tibbets and the Enola Gay crashed during a training flight and they weren’t able to drop the atomic bomb on Hiroshima?

In Robinson’s novella, fictional Captain Frank January is the bombardier who joins the replacement team on the B-29 “The Lucky Strike.” It explores the classic trope about how one man wrestles with his conscience over dropping a single bomb that could potentially kill hundreds of thousands of civilians. He thought that dropping “the bomb” on an uninhabited area as a demonstration of America’s nuclear power would have been enough to make the Japanese surrender.