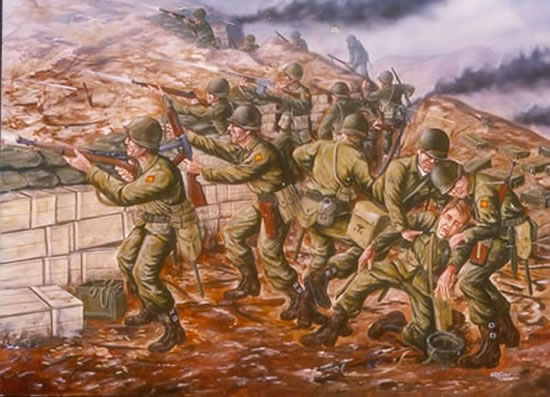 Chapter 2: War, except the Master didn’t call it war, he called it “the Games.” Games, but these games were deadly.

It had been weeks, no…months ago when seventeen-year-old Landon had stood in the main Arena at training camp with the other recruits, all kidnapped as he was, from all over the Earth, and from all over time. They had one purpose: to represent this realm in the Games, to fight, battle after battle, war after war, and if they won, the realm gained territory. If they lost, so did the realm, and that meant they died.

They still wore their collars, for cowardliness or defection to the other side would not be tolerated. At the first sign a soldier’s betrayal, there would be a warning pain. At the second, the collar’s charge would be fatal.

For Landon, and some of the others, the collar had a secondary effect: it cancelled the ability to perform any form of sorcery, a skill for which the teen had trained since he was a child.

Today’s game was “Flanders Field,” reminiscent of the trenches and killing grounds of Earth’s First World War, except the other side had styled their troops not only from the early 20th century, but from the first century Roman Empire, the eighteen century American Revolutionary War, and one platoon carried plasma rifles from the twenty-second century Cyborg Wars.

END_OF_DOCUMENT_TOKEN_TO_BE_REPLACED

I’m dead. I used to be a man, a husband, Dad, Grandpa. Now I’m a corpse. Maybe my body is still lying in the hospital bed where I died, maybe it’s at the Funeral Home by now, or it could even be six feet under. I can’t tell how much time has passed since time doesn’t mean anything to a dream.

That’s what I really am, a dream but I’ve got a problem. I used to be a man in a coma dreaming myself into different versions of people’s lives, in the past in other countries, and even in the future on another planet. But then the dreamer dreaming me died so how am I still here? Who is dreaming me?

Whoever it is, I should thank them I suppose. I mean it’s a really nice dream. I like the ocean. I used to live not far from it, maybe seven miles. Today, I’m walking on my own private beach. It’s a bright, sunny summer day and there’s not a soul in sight. No roads, no buildings, nothing show that anyone has been on this beach ever except me.

I can hear the sound of the surf, sea birds overhead, a breeze blowing through tree branches on my left, but no traffic noise, no talking, no airplane or boat motors. It’s like the world was created just for me. Lucky me.