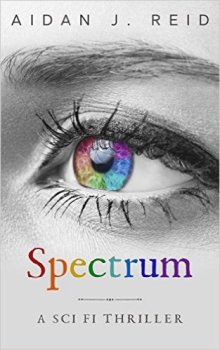 I just finished reading Aidan J. Reid’s new short story Spectrum, a Sci Fi Thriller (you can find out more about it at his blog).

While it advertises itself as a thriller, from the very first sentence, I got the feeling I was reading a horror story (spoiler alerts throughout–you have been warned). A mysterious medical outfit is offering the homeless money and opulent living conditions in exchange for them volunteering for human experimentation of different products.

We never learn out protagonist’s name. Just that she’s a 26-year-old homeless woman with an alcohol addition. Apparently she, along with others off the street, qualify as test subjects for rather ill-defined experiments, ill-defined until the “treatments” are actually applied.

The majority of the story is a set up to the actual procedure and aftermath on her eyes. From what she describes, the reader will have a fair idea of what was done with her, but to her, it was still a mystery.

I was engaged in the story to nearly the very end. Her eyes had been changed. True, she’d been alienated from most of the other patients except for Tyler, but she was hopeful not only that her sight was restored, but that the people who used her as a test animal, BioLuminary, were to actually give her a job, not requiring that she undergo any more medical procedures.

For her, everything seemed as if it were looking up. For the reader, we’re waiting for the other shoe to drop.

And drop it does. In fact, it’s so abrupt that I was shocked right out of my involvement in the narrative. Wait a minute. What happened?

Only vague references to “reptiles” and the poor woman’s all too sudden suicide.

Aiden really had me going up to this point. By page count, I could tell the story was about to end, but it ended in a way that left several points completely unresolved.

What is BioLuminary? How do they get away with what are obviously illegal medical experiments on human beings? At the end of the story, her body is lying in the parking lot in front of the building. I don’t know about the UK where the story takes place, but in the US, the body would be taken into police custody and an autopsy would be performed. What BioLuminary did to her eyes would become apparent, and a thorough investigation would have been launched.

Her vision abilities, so promising, so tantalizing, were left unexplored. Ideally, this concept could have been taken much further. I know the suicide was intentional, but it also seemed a waste, not only of a human life, but of story potential. She could have gone much further in discovering what she could see, what she could learn, and then perhaps, find a way to blow the whistle on BioLuminary, freeing their hapless medical prisoners, or dying in the attempt.

I guess we’ll never know. This was written as a stand-alone short story, so the unresolved plot points will remain unresolved forever. Too bad.

The story is available from Amazon as a Kindle download for less than a dollar. In spite of my feelings about the ending, everything else leading up to it was top-notch. Maybe I’m wrong. Read “Spectrum” for yourself and write your own review.