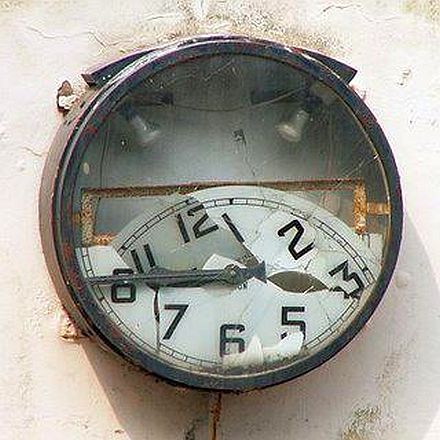 “What the hell? It happened again.”

Jason McClure continued to look at his watch with a puzzled expression on his face.

Val was finishing the last of the sushi rolls in the kitchen, getting ready for the kids to come over for dinner.

“It’s broken, Jase. It was your Dad’s watch, remember? Who knows how old it is.”

Jason walked into the kitchen so he could hear his wife better. “It can’t be that old. It’s an ordinary digital Casio, and it only gives the wrong time occasionally.”

“Maybe you’re pushing the wrong button or something.” Val was only half paying attention to the conversation as she meticulously sliced one of the rolls into equal pieces. “Can you get the soy sauce and wasabi out, please?”

“Sure.” Jason opened the fridge to get the tube of wasabi out, then walked across the kitchen to the pantry for the bottle of soy sauce.

“Maybe your Dad had an alarm set?”

“For four past noon every day? Why?”

“Is it for every day or just certain days? Maybe he wanted to wake up from a nap. You know how he liked naps.”

“That’s nuts.” Jason set the soy sauce and wasabi on the kitchen table and then went to get a bowl. “Who takes a nap in the morning and then wakes up at noon? Not Dad.”

“He wasn’t feeling very well toward the end, Jase. Maybe he set something wrong.”

“Maybe.” Jason wandered back into the living room and sat in the chair by the window.

“12:04 p.m. What an odd time,” he murmured. “It pops up sometimes when I’m trying to illuminate the display and hit the wrong button.”

He let go of the watch. The display persisted for several seconds and then returned to the present day and time.

“I’ve got to call Mom.” He abruptly got up from his chair and walked to the hall.

“Now?” Val turned her head in time to see her husband disappear around the corner. “Why not wait until the kids get here?”

Jason went into the study, closed the door behind him, picked up his smart phone, and dialed his Mom’s number. Several states away, her home phone rang.

“Hello?” Jason recognized her voice. She never bothered to check her caller ID, otherwise she’d know it was him.

“Oh hi, dear. I was just thinking of you.” He could almost see her light up. She’d been so lonely since Dad passed away.

“Look, Ma. We’ll call you back in a little while when the kids get here, but I’ve got to ask you a question about Dad’s watch.”

“His watch? What about it?”

“I want to know if Dad ever complained about it coming up with the wrong time. Did he ever say anything like that to you?”

“Now that you mention it, about a month before he died, he said that sometimes it would show him the wrong time.”

“This is really important, Ma. Was it always a different time or the same time over and over?”

“Let me think. I’m pretty sure it was the same time. Around noon, maybe.”

“No. Oh, I remember. He said it kept saying it was four after twelve in the afternoon. He was going to take it in to be serviced but he never got around to it. Why is this so important, Jase?”

“Oh, uh…just the same thing’s happening to me.”

“Well, take it in and have it fixed.”

“I will, Ma. Look, the kids are going to be here soon. We’ll call you back a little later, okay?”

“Sure, son. I look forward to talking to everyone. Give Val my love.”

Jason pressed the button to end the call and set the phone down on his desk.

Mom gave me Dad’s watch after he died. It’s a Casio Wave Ceptor 3054. Sometimes I push the wrong button and the time shows as 12:04 p.m. but always for the current date. I’ve tried “Googling” what that button is supposed to do but it doesn’t seem to do anything when pressed alone.

My Dad did pass away on Wednesday, April 19th sometime between noon and 1 p.m., but probably closer to one, so I doubt his watch is telling me anything mysterious. Still, it occurred to me that it would make an interesting “ghost story” if his Casio predicted the date and time of his death, at least in fiction.