I just finished watching (Tuesday night, Nov 1) Quantum Leap’s season 1 episode 7 O Ye of Little Faith, which is an interesting title since faith is mentioned and yet largely discounted, particularly by Ben.

This is the Halloween episode (the original series had several supernaturally themed episodes) since it was first aired yesterday (as I write this) on October 31st. It also heavily draws from The Exorcist (1973). So much so, that I was surprised that at some point during the episode, Ben didn’t mention it (although if he were born in the mid-1980s and generally pursued a career in science, he may not have gotten a taste for horror films).

Ben has leapt into a Catholic Priest, Father James Davenport, a specialist in exorcism from Baltimore. The city he’s visiting isn’t mentioned, but the year is 1934, during the great depression.

END_OF_DOCUMENT_TOKEN_TO_BE_REPLACED

“The Haunting of the Ginger’s Regret” got it’s first four-star review on Amazon. I’m pretty happy with it but any honest review is appreciated.

Remember that for the month of May, I’m offering a free PDF copy of the story for anyone who asks. All I’m asking in return is for the reader to write an honest Amazon and goodreads review (you can copy and paste your Amazon review into goodreads).

Someone on Facebook mentioned this story too and I’m pasting his review below:

END_OF_DOCUMENT_TOKEN_TO_BE_REPLACED 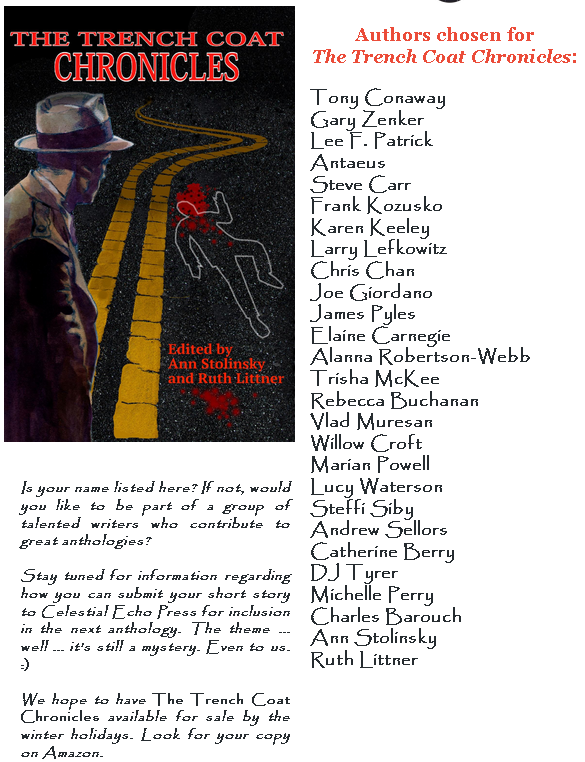 About six weeks ago, I announced that my short story “The Haunted Detective” was accepted for publication in the Gemini Wordsmiths anthology “The Trench Coat Chronicles.”

The graphic above not only includes my name among the accepted authors but relates that this book will be available sometime around the winter holidays.

If you can’t wait, here’s a small excerpt:

END_OF_DOCUMENT_TOKEN_TO_BE_REPLACED

In the last ten days or so, in pretty rapid succession, I got three rejection notices, two from the same publisher. Needless to say, I was bummed. That’s why when Ruth and Ann from Gemini Wordsmiths told me this morning that my short story The Haunted Detective was accepted into their Trench Coat Chronicles anthology, I was thrilled.

I can’t find a formal announcement on their website, but I did find one on a Facebook group, which is where the screen capture comes from.

Here’s part of the submissions call, just to give you an idea of what I had to shoot for:

END_OF_DOCUMENT_TOKEN_TO_BE_REPLACED

“Been coming here to Cloverdale for a while now, Taklishim.” Alan Tupper stood in front of the abandoned general store, almost all that was left of the ghost town in southern New Mexico.

“You have been my good friend since you were a boy.”

“I’m twenty-six now and getting ready to get out of the service.”

“I thought you liked the Army.”

“Talking to you every year since that last reunion changed me.”

“You have never taken life unjustly.”

“But ol’ Captain Tupper did.”

END_OF_DOCUMENT_TOKEN_TO_BE_REPLACED

Raymond walked into his bedroom with a fresh cup of coffee for a relaxing Sunday morning and found the Christmas decorations laid out on the bed next to his newspaper. “You never give up, do you, Mom?” Setting his cup down on the end table, the 45-year-old divorced engineer sat at the foot of the bed and picked up the dollar store Santa. “I miss you too, Mom, especially this time of year.” He knew his ex had her place elaborately decorated for the season, and that his three sons delighted in trying to guess what was inside all of the brightly wrapped packages, but he’d given up on Christmas and everything it was supposed to stand for when his Mom died a month after his divorce was final. Taking a deep breath, he picked up his cell and punched in a number.

“Hi, Sherry. Is it okay if I come over for a while? I’ve got some presents for the boys.” He listened and smiled. Of course, he’d have to go shopping first.

I wrote this for the 196th FFfAW Challenge hosted by Priceless Joy. The idea is to use the image above as a prompt for crafting a piece of flash fiction between 100 and 175 words long. My word count is 174. This is pretty much a “stream of consciousness” thing. I just wrote the first thing that popped into my head. 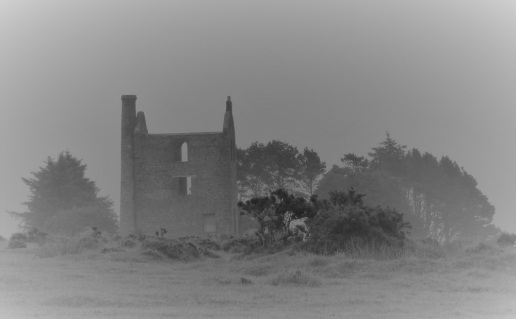 At first Alise Egan thought she had been trapped in a cursed painting of herself facing an ocean wave, but then she realized it was an interdimensional gateway to another reality. In the painting, the twenty-two year old MIT graduate looked much as she appeared in real life, tall, what her billionaire benefactor, the painting’s owner Keyne Harlan and men of his generation would call “curvy,” long, blond hair streaming behind her along with her extravagant crimson gown, a ostentatious gift from said-benefactor, the man who adopted her after her parents died.

But once across the chaotic field of alabaster and sapphire, she entered the realm of the dead. Well, that’s what they had wanted her to believe, all of the non-corporeal entities who inhabited that realm. Two of them had initially passed themselves off as her dead parents, but then she saw them for what they truly were, invaders intent on using her as a bridge from their world to hers for reasons unknown and undesired.

But one of them said, “Physical laws don’t apply here. There’s no difference between science and magic.” That’s when she realized she could do anything, and so she did. Alise pushed back, at first driving a few away from the threshold, then hundreds, then thousands, and finally all that there were, millions and tens of millions.

END_OF_DOCUMENT_TOKEN_TO_BE_REPLACED 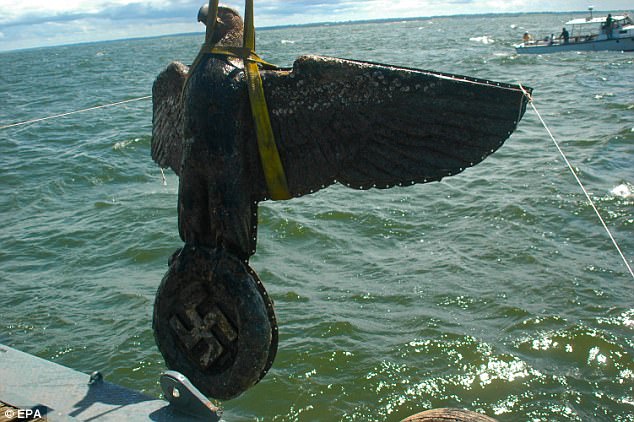 He watched as divers brought up the figurehead of his beloved Graf Spee from the muddy depths where it had lain for nearly seventy years. If he could have wept, bitter tears would have streamed down his face, but this was denied him as well as peace he had sought long ago. Instead, damnation has been his constant companion, and though he could take no breath, what was once his heart was crushed at this bitter reminder.

They covered the swastika displayed beneath the eagle’s nine-foot wingspan out of consideration of those still sensitive to Hitler’s bloody legacy. So be it. The Nazi dream was just as dead as Hitler, and just as dead as Captain Hans Langsdorff who committed suicide two days after scuttling the German battleship rather than have it fall into enemy hands. How fleeting and meaningless history has rendered his ship and his wandering spirit.

I wrote this for the What Pegman Saw writing challenge. The idea is to use a Google maps image/location as the prompt for crafting a piece of flash fiction no more than 150 words long. My word count is 149.

Today, the Pegman takes us to Montevideo, Uruguay. As usual, I looked up the location and under 20th century, I found this:

During World War II, a famous incident involving the German pocket battleship Admiral Graf Spee took place in Punta del Este, 200 kilometers (120 mi) from Montevideo. After the Battle of the River Plate with the Royal Navy and Royal New Zealand Navy on 13 December 1939, the Graf Spee retreated to Montevideo’s port, which was considered neutral at the time. To avoid risking the crew in what he thought would be a losing battle, Captain Hans Langsdorff scuttled the ship on 17 December. Langsdorff committed suicide two days later. The eagle figurehead of the Graf Spee was salvaged on 10 February 2006; to protect the feelings of those still sensitive to Nazi Germany, the swastika on the figurehead was covered as it was pulled from the water.

I found the story verifying this at BBC News and the rest, as they say, is history.

Oh, the location seemed familiar, and earlier this year, I wrote a tale for the same location.

“Oneida, I wish you wouldn’t torture yourself this way. Come back with me.” Del held out long, skeletal fingers toward the diaphanous waif that he loved with all his heart, that is, if he still had one.

“Just a few more minutes. I like to hear their laughter.”

“We have laughter, too. It just takes a bit of adjustment.”

“I know.” She continued to stare wistfully at the people being whisked about on the rides. “You’ve told me before.” She turned towards him, a quizzical look on what was once her face. “How long has it been?”

“Since you arrived? Barely a decade, my love.”

END_OF_DOCUMENT_TOKEN_TO_BE_REPLACED

The lady in black, as the tabloids dubbed her, had drowned in Victor Fountain’s swimming pool five years ago and now she was back. Marcela Saenz was twenty-eight when she died. Mr. Fountain, CEO and President of one of the top software engineering companies in the world, was on holiday with his family at the time and had no knowledge about how the personal assistant for his company’s Marketing director had gotten onto his property.

The coroner declared the case death by misadventure. Based on the contusion on the back of Ms. Saenz’s head, and the amount of water in her lungs, he determined that she must have fallen into the pool, struck her head against the side, rendering her unconscious, and subsequently drowned.

Her body was found by Johnny Morales, an employee of a pool cleaning service, some forty-eight hours after she died. The nineteen-year-old quit his job the next day.