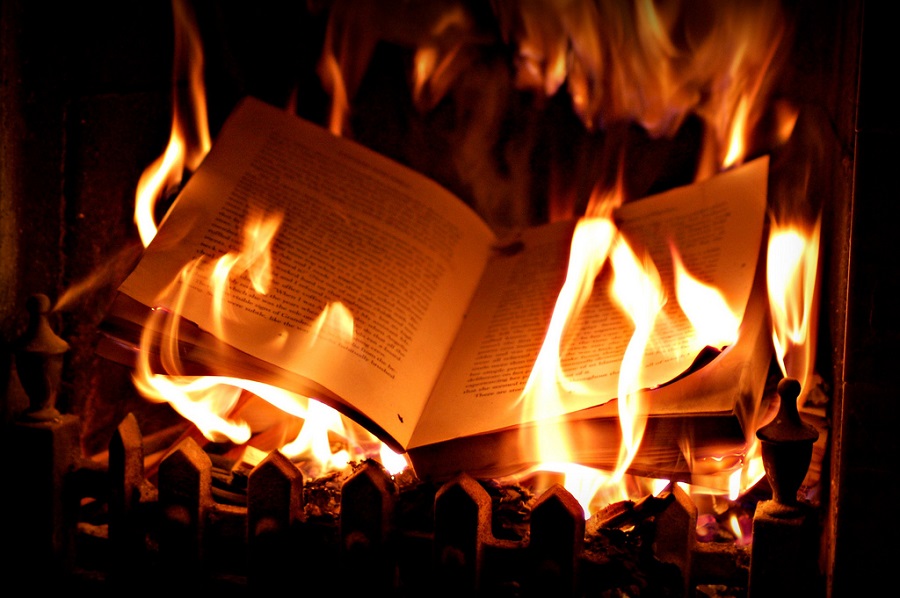 The older couple held hands and cried at the book burning party. Like everyone else in town, they were compelled by government edict to attend and witness the “liberating” event. Only State approved books were allowed in schools anymore. The State had been collecting those publications deemed “racist,” “sexist,” and every other forbidden “ist” on their list and storing them in a warehouse near the town square just for this occasion.

Fortunately, children under six were exempt from attending, so their grandkids were spared this atrocity, being cared for at home by their son.

“How did the world come to this, Jeannie? I thought book burning went out with the Nazis.”

“What a terrible world we live in.”

“At least they’re not kicking down our front door and confiscating our library.”

“That’s true, darling. But we have to keep reminding the little ones not to tell their teachers what we read to them at home.”

“Do you think it will ever get better, Mike?”

“As long as we teach Jimmy and Autumn to grow up as critical thinkers, to trust themselves and those who love them rather than the State, then yes, it will. Someday they’ll be running the nation and then it won’t be the State anymore. It’ll be a free country again.”

“Probably not, Jeannie, but our grandchildren will. Our hope for the future is in them.

I haven’t gotten blatantly political on this blog in quite some time, but I read a series of stories in social media this morning that bothered me, and when I’m bothered, I process my thoughts and emotions by writing (some authors have told me they are “blocked” when they become upset which just astounds me).

It all started with a story I found on Facebook published by a conservative news agency. I had to fact check it since news organizations that lean either one direction or the other politically and socially aren’t always totally trustworthy. I found the story published by a number of venues including the Washington Post and it’s called ‘Racist propaganda’: Librarian rejects Melania Trump’s gift of Dr. Seuss books.

You can click on the link I provided above to read the story, but basically, it tells the tale of First Lady Melania Trump donating some books to what I gather to be a rather posh public school in Cambridge, Massachusetts on the occasion of National Read a Book Day. Apparently, the school’s librarian Liz Phipps Soerio took exception to some of the donated books, specifically those penned by Dr. Seuss (Theodor Seuss Geisel). You can read Ms. Phipps Soerio’s letter to the First Lady at The Horn Book blog.

I’m 63 years old and in all those decades, I never, ever imagined that the “cat” in The Cat in the Hat was supposed to represent a white man in blackface.

I regularly read Seuss’s There’s a Wocket in My Pocket to my 27-month-old granddaughter and I can’t see anything amiss about it. Green Eggs and Ham and One Fish, Two Fish, Red Fish, Blue Fish were among my children’s favorites when they were young (although since my wife and kids are Jewish, we read the former book as “Green Eggs and Lamb”).

In her letter to the First Lady, Phipps Soerio references an article published at the School Library Journal website called Is the Cat in the Hat Racist? Read Across America Shifts Away From Dr. Seuss and Toward Diverse Books written by Grace Hwang Lynch, citing an analysis of Seuss’s works by Katie Ishizuka.

Even after reading all this, I still can’t see it, but I guess I could be accused of lacking perspective. 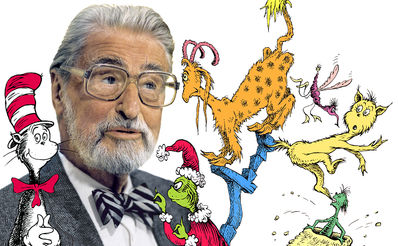 Dr. Seuss (Theodor Geisel) and some of his beloved characters.

Yes, I’m aware of how during World War Two especially, American propaganda campaigns depicted Germans and Japanese in a very unflattering light, and yes, historically in film, art, and literature, people of color were horribly stereotyped. However, is this enough to ban (or burn as I have fictionally illustrated above) Dr. Seuss books forever?

I did find a rebuttal piece to Ms. Hwang Lynch’s article (and Ms. Ishizuka’s analysis) as a link in the comments section of Ms. Hwang Lynch’s missive called Can We Forgive Dr. Seuss? published at Fresh Writing, which hosts a series of essays produced by first year students at the University of Notre Dame.

The short answer to that question is “yes.” The essay’s author, Kelly Smith, ended her piece with this:

“His views towards the Japanese took a complete turn towards the end of the war, and he focused his energy towards to enlightening the public to his new way of thinking. Through his educational films and allegorical apology of ‘Horton Hears a Who!’, he became the Dr. Seuss generations have come to love. When we celebrate Dr. Seuss, we don’t just celebrate a cat sporting a hat, dubious eggs and ham, or a grouch who hated Christmas. When we celebrate Dr. Seuss, we celebrate Theodor Geisel, a man who had flaws, but who also had the understanding and courage to change his views to better himself, and perhaps even better the world.”

Geisel was a human being who originally adopted the attitudes of the era in which he grew up, but he also was capable of changing and improving himself. Simply rejecting or banning his books prevents us as a people from learning from his journey, much in the way that destroying statues prevents us from learning our own history as a nation.

Ms. Phipps Soeiro in her online letter also included a link to a list of ten books she recommended to Ms. Trump as more acceptable alternatives. I haven’t read any of them so I can’t render an opinion, but on the surface, they seem like they’d be fine and appear to be more positive representations of people of color.

All that said, I have an ongoing concern that the American public education system is shifting away from actually educating children (as in reading, writing, and arithmetic) and more toward social indoctrination. No, I’m not speaking against people being treated fairly with kindness and respect, but ultimately parents have the responsibility to instill their children with their values and morals, which may or may not precisely line up with public education in general and the values of Ms. Phipps Soerio in particular.

Oh, I did find the First Lady’s rebuttal to Ms. Phipps Soerio’s commentary at Fox News (yes, I know…I tend not to read them very much, but to be fair, I sample news sources from across the vast political and social spectrum in an attempt to stay informed) rather illuminating.

It was illuminating mainly because it included a photo of former First Lady Michelle Obama (I added it below) reading a Dr. Seuss book to a group of school age children in the East Room of the White House accompanied by actors dressed as “The Cat in the Hat” and “Thing 1” and “Thing 2”. Most of the kids were wearing “Cat in the Hat” hats (which looks adorable).

If people like Ms. Phipps Soeiro choose to reject a gift of books because of their personal social and political beliefs, they are free to do that (although it’s my understanding that her actions were not authorized by her employer), however as a people and a nation we must remain free to choose what forms of art and entertainment we access, which includes what we read to our children.

You may think my fictional story about a time in the near future when book burning will be a legal requirement to be ludicrous, but any totalitarian society seeks to control what information can be accessed by its population. George Orwell’s novel 1984, which apparently is still quite popular, is one of the best fictional examples of this, along with Ray Bradbury’s Fahrenheit 451 (although Bradbury’s concern was more about how he saw television dumbing down America…I’m glad he didn’t live to see the smartphone completing the job).

My final point is all this is happening during Banned Books Week (September 24-30, 2017) which is stunningly ironic. You can find out more about our right to read at BannedBooksWeek.org. 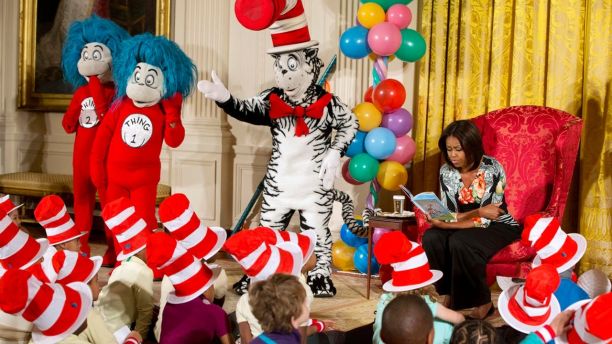 First lady Michelle Obama, with Dr. Seuss characters the Cat in the Hat, Thing 1, and Thing 2, reads to local students as part of her “Let’s Move, Let’s Read!” initiative, Wednesday, Jan. 21, 2015, in the East Room of the White House in Washington. The book, Dr. Seuss’s “Oh, The Things You Can Do That Are Good for You: All About Staying Healthy,” has been updated with the help of the Partnership for a Healthier America and includes healthy foods and exercises. (AP Photo/Jacquelyn Martin) (AP)