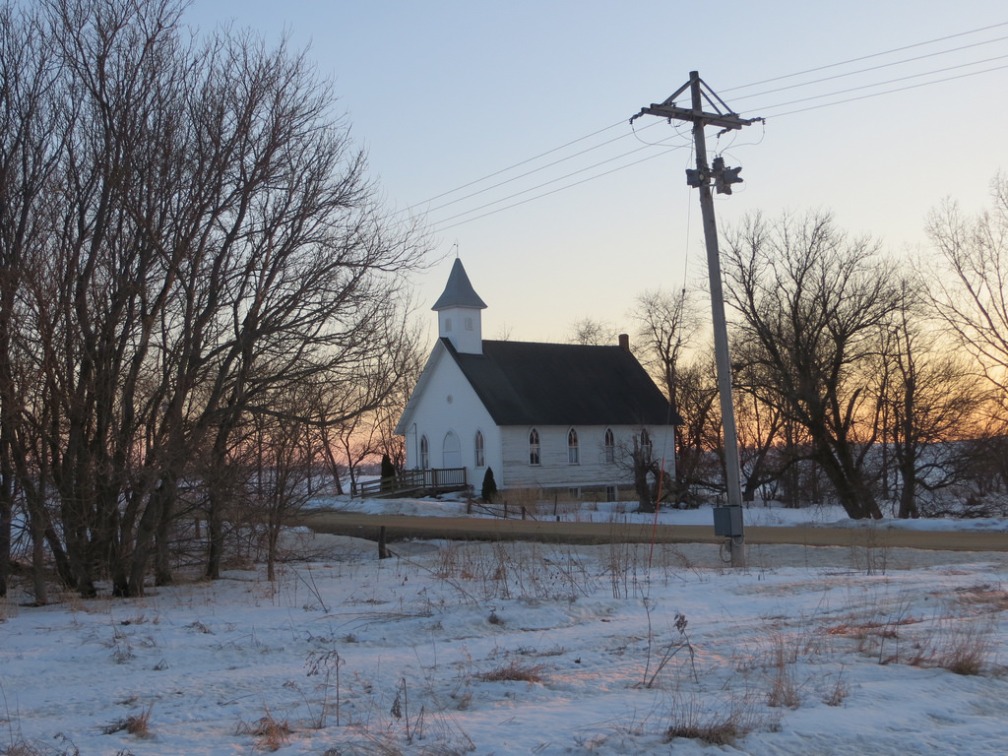 Abandoned church near the cemetery in the Buckhorn, Iowa ghost town.

“What about that road? Charlie, can you make it?”

“Lining it up, Jim. You and Ted like jumping outta planes so hold your water while I land this tub.”

Paul Lambert stood in the old Buckhorn cemetery looking at their graves. They crashed fifty years ago a few hundred yards away. As their closest friend, his Dad Chuck had them buried here. Paul paid his respects and listened as the ghosts of Charlie, Ted McKeever, and Jim Buckley re-enacted their final moments on the anniversary of their last flight. Somewhere above, he could hear the laboring engine of a Cessna fighting to stay in the air just a few seconds longer.

I wrote this for the What Pegman Saw flash fiction challenge. The idea is to take a Google maps image and location and use it as the inspiration to craft a piece of flash fiction no more than 150 words long. After much editing, my word count is 150.

Today, the Pegman takes us to the ghost town of Buckhorn, Iowa. I looked up Buckhorn on the web, and according to The Vintage News:

Buckhorn is a ghost town, located in Jackson County just off of Highway 64. Some quick research reveals that it was a farmers’ cooperative founded early in the 20th century, and then was bought out by a large dairy in 1962. All that is left of it is a cemetery, an abandoned church, and this building, the old Buckhorn Creamery.

Okay, not much to go on.

I looked up Buckhorn on Google maps and it’s not particularly isolated. In fact, it’s only about a third of a mile from the Maquoketa Municipal Airport. I thought about doing a historical piece, but even consulting several sources, I couldn’t find out when the airport was established. However, looking at the airport’s official website gave me an idea, but I’d have to monkey around with history to pull it off.

When I was a kid, I watched a TV show called Ripcord starring Larry Pennell, Ken Curtis, and Shug Fisher. The show ran from 1961 to 1963 and depicted the adventures of two expert skydivers (Pernell as Ted McKeever and Curtis as Jim Buckley) who did everything from perform dangerous aerial stunts to capturing bank robbers, always with the climax being jumping out of an airplane and going into free fall.

Skydiving was new back then and the sport had just become incredibly popular, which is probably what kept the show going for its two-year run.

Actor Paul Comi played the original pilot Chuck Lambert but he was replaced in the middle of the first season by Shug Fisher as Charlie Kern. I got all these details from Wikipedia and decided to run with it, making their last flight in 1963 or ’64. Not sure if Buckhorn was a ghost town by then since it had only been bought out in 1962, but here’s where I fudge history.

In my imagination, Kern was trying to make Maquoketa Municipal Airport, but again, I have no idea if the airport even existed back then.

I created the character Paul Lambert, Chuck Lambert’s son, who would be in his early to mid 60s in 2017 combining actor Paul Comi’s name with his character’s in order to complete my ghost story.

I know. My explanation is longer than the story itself, but it was fun tying all this stuff together.

To read other stories based on the prompt, go to Inlinkz.com.