The public hoped after the spaceship carrying Klaatu and the robot Gort launched from the Ellipse just south of the White House, that it was all over. The newspapers, radio, and TV broadcasts reported the full text of the speech the alien had given to the international group of scientists assembled at the park by the esteemed physicist Professor Jacob Barnhardt. For a time, the citizens of the world were terrified that the Earth would be destroyed if the Americans and Soviets continued their efforts to develop nuclear power and advanced rocketry.

But with the passing of weeks and then months, when nothing else happened, humans, being who they are, paid less and less concern to the dire warning of the man from another planet and got on to the next crisis or fad.

However, governments capable of observing orbital space and a small but select group of scientists knew that when Klaatu departed, he left something behind or rather six somethings.

Klaatu had left Washington D.C. on Thursday, July 19, 1951 and although not generally known, stayed orbit for three days. A week after his true departure, on Sunday the 29th, the six objects deposited by his ship achieved geosynchronous orbit above different points of the planet, effectively being able to observe every square millimeter of our world’s surface.

The following day at -05:52 Greenwich Mean Time, engineers at the EBR-1 reactor in Arco, Idaho and the Obninsk reactor in the Soviet Union reported a sudden drop off in energy output. Twelve minutes later, it was confirmed that absolutely no nuclear fission activity was recorded at either facility. Forty-eight hours after that, the United States and Soviet military institutions came to the startling conclusion that their small but growing atomic arsenals were totally inert. A firecracker could generate more explosive force than the combined nuclear might of both superpowers.

Each side became immediately terrified that it had only happened to them and that they were now totally defenseless against an atomic assault launched by the other power. Fortunately, while the spy networks were slow in reporting the conditions of the opposite power’s nuclear weapons, certain scientists and engineers involved in each nation’s reactor programs were able to clandestinely confer. By the beginning of Autumn, the Americans and the Soviets knew they were in the same boat together.

“So Professor, it’s your opinion that these six orbiting devices are broadcasting some sort of anti-atomic ray onto the Earth that’s preventing our nuclear weapons and reactors from working?”

Professor Barnhardt had been called to the Pentagon by a group of high-ranking officers to report his findings on the effects of the unknown radiation being emitted by the alien satellites.

“This is something like what the alien did last July when he stopped all electrical power generation worldwide for an hour, right?”

“Yes, General Bradford, except for emergency services, hospitals, aircraft in flight, and so on.”

“But what can be done, Professor? Have you found a way to counteract the alien’s rays?”

“General Conroy, if by that you mean have I discovered a method of canceling the inhibitor effect so that nuclear fission can once again be allowed to occur, the answer is no. This is a technology that is well beyond the understanding of my colleagues and myself.”

“Then I guess we’ll have to shoot them down.” General Robert Ulysses Bacon picked up the phone and dialed a series of numbers.

“General, I really don’t think you should…”

Barnhardt was cut off as Bacon started barking orders and demanding a situation report. Three minutes later, he slammed down the phone.

“May I assume you have just learned that no matter how angry you become, you cannot order engineers and technicians to instantly create a rocket capable of reaching that high above the Earth.”

“None of your business, Professor. Now unless you have something productive to offer this group, I’ll have you escorted off the premises.”

Jacob Barnhardt rose and put on his coat and hat. “I’m sorry, Gentlemen. At this point, there’s nothing I can do.”

“Very well. Sergeant, escort the Professor back outside to his car.

The young non-com by the conference room door snapped off a salute which Bacon grudgingly returned.

Having hung his coat up in the hall closet and deposited his hat on a shelf, Barnhardt returned to the comforting shelter of his study and continued to work on the puzzle currently presented in chalk and enshrined on his blackboard. Some five minutes later, having noted his return, the Professor’s housekeeper Hilda entered with a serving of tea.

“How did your meeting go, Professor?” She set the tray on his desk and poured him a cup of Darjeeling.

“About as well as you’d expect, Hilda.” He continued puffing on his pipe while pondering the last equation he had jotted down. Noticing the cup she was offering, he put the pipe in a nearby ashtray and received it with a nod.

“Whatever are we going to do, Professor?”

Finishing a sip, he placed the cup on the saucer he was holding in the opposite hand. “About what exactly?”

“About what, Professor? About the atomic bomb. What if the Russians get their’s back before we get ours?”

“But, isn’t that what you’re working on now, Professor?” She indicated the black board.

He turned briefly to his work and then back to her. “That? Oh heavens no, Hilda. I have no interest in finding a defense against Klaatu’s orbiting devices.”

He took another sip absent mindedly considering whether he should have asked for some sugar. “Imagine, Hilda.” He put the cup and saucer down next to the ashtray, picked up his pipe and relit it. 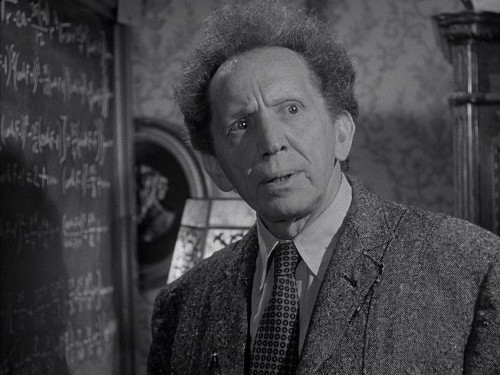 Actor Sam Jaffe as Professor Jacob Barnhardt in the 1951 film “The Day the Earth Stood Still.”

“The nuclear inhibition effect is worldwide. At no place on our planet can atomic fission occur, not in a nuclear reactor and not in any nuclear weapons. Klaatu has effectively made a nuclear war on Earth impossible. Isn’t that a wonderful thing?” He took a deep draw from his pipe.

“I…well, that is, I guess so. I mean, as long as the Russians don’t have the bomb either.”

“I’m sure you realize that Klaatu had no intention of favoring one government over the other. He wanted to make sure the human race as a whole would not export our aggression to the other planets endangering their peace. I’m rather fond of his solution.”

“Won’t the Army try to shoot down the little spacethings or whatever they are?”

“Satellites, Hilda. They’re called satellites and yes, they are certainly going to try. Both governments want very much to develop a rocket that can fly that far into space and destroy the six orbiting devices, but you know what, Hilda? I don’t think it will be that easy.”

His pipe clinched between his teeth, the Professor took his tea over to his desk and sat down. Peering outside, he thought that it looked like rain.

Just after Thanksgiving, General Bacon got his wish when a modified German V-2 rocket code-named Bumper 8 was launched from the White Sands Proving Ground in New Mexico toward the closest alien satellite. The rocket carried a warhead loaded with enough explosives to blow off the top of a mountain.

Five miles from its target, a high-energy particle beam similar to the weapon used by the robot Gort fired from the orbiter completely destroying the missile. Within the next thirty days, two similar attempts by the Americans and one by the Soviets yielded the same result.

Twenty-four hours after that, what was most likely a pre-recorded message was broadcast to all television and radio receivers on the planet.

“We of the other planets do not expect your governments or military organizations to accept this consequence easily and so we expect a certain amount of resistance. However our patience with you is not limitless. The defensive beams on the satellites can be used to strike back at your planet with a level of destruction that is devastating, even by your standards.

“If you learn the wisdom to cease such hostilities and, as a species, you decide that survival and mutual peace among your nations is a desirable and achievable goal, then we will be back in exactly fifty years from the date of my original visit. Perhaps then you will be ready to join us in the spirit of cooperation and friendship. We will we watching and waiting.”

On Wednesday, July 18, 2001 at -07:23 GMT, a fast-moving saucer-shaped craft began its long deceleration from deep space as it approached the Earth.

There was something in this piece of flash fiction that made me think of North Korea’s nuclear weapons program, a defector, and a revolutionary way to stop nuclear war. Then I thought of two words: “nuclear inhibitor.”

I spent a long time thinking of how the U.S. could somehow get a nuclear inhibitor device into North Korea to disable their weapons and reactor programs but nothing seemed even remotely plausible. Also, you really want to inhibit a nuclear weapon when it’s about to go off, not when it’s sitting in its launching bay.

That made me think of former President Ronald Reagan’s Strategic Defense Initiative nicknamed “Star Wars” by the media. Reagan wanted to make nuclear war obsolete, which made me wonder why his political opponents and critics pushed back so hard. After all, it’s a worthy goal. But the technology didn’t (and probably still doesn’t) exist to make his dream a reality, and it would be too difficult to fit it into the story I had in mind.

Since I couldn’t think of a way to “turn off” nuclear fission for just one country, I thought about doing it for all of them. That led me to consider the 1951 film The Day the Earth Stood Still starring Michael Rennie, Patricia Neal, and Sam Jaffe.

At the end of the movie, the alien Klaatu (Rennie) warns the people of the Earth through a collection of international scientists gathered at his spaceship, that he didn’t care if humanity blew itself up, but if they/we attempted to launch nuclear missiles at the other planets, they would end all life on our world.

His ship took off and that was that…but what would have happened next?

Since he had the technology using a single ship to inhibit electrical power generation worldwide (very selectively since hospitals and airplanes in flight continued to operate), why not leave behind six orbiting satellites that could do the same thing with nuclear fission?

I inserted the character of Professor Jacob Barnhardt (Jaffe) because he seemed like the sort of fellow who was smart enough to figure out what was going on and also to absolutely approve of our atomic “toys” being taken away from us.

I did find out that the Germans launched a V2 rocket in 1942 that was able to reach space and that in 1949, the Americans used a modified V2 called Bumper 5 to go even higher.

The first nuclear reactor to generate electricity went online in Arco, Idaho in 1951 and the first Soviet commercial reactor was developed in 1954 (I had to fudge the date for the sake of my story).

What Klaatu’s little gift would mean is that only the U.S. and Soviets achieved nuclear status before all fission became impossible on Earth. While that presents severe setbacks in terms of the production of electrical power (as opposed to burning coal and other fossil fuels), it has a lot of benefits, too.

I wonder what we would have done since 1951 if atomic power were totally unachievable?

10 thoughts on “The Unwanted Gift”