“Jonathan, there’s a terrible famine here. You must save these people.”

“With what? All I have is an old-fashioned camera.”

“The person who was supposed to photograph this tragedy is ill. By the time he recovers, the opportunity to show the world the horrors here in Bengal will be gone. You must take his place.”

Jonathan Cypher, a man out of time, turned away from the bent fan and stepped off the hotel porch. Seeing the three starving and dying children, he raised the camera to his face, focused, and pressed the shutter release. 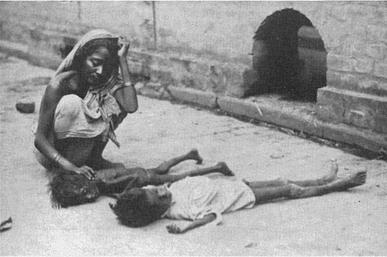 Victims of the Bengal famine of 1943. Copyright is or was held by The Statesman newspaper of Kolkata, India. According to that country’s Copyright Act of 1957, the image is now in the public domain (photographs are protected for 60 years from the date of publication), but it may still be under copyright in the United States.

I wrote this for the Rochelle Wisoff-Fields flash fiction writing challenge. The idea is to take the image above and use it as the inspiration for crafting a piece of flash fiction no more than 100 words long. My word count is 98.

To the best of my knowledge, the person who provided the photo is from India, so I wanted to start from there. The yellowish cast of the photo made me think of pollution or chemical warfare, so I decided to see about India’s history during World War Two, and if I could devise a fictional Nazi plot in 100 words. What I discovered was much worse.

You can read all about the Bengal Famine of 1943 by clicking the link, but the black and white pimage just above was part of a photo spread published in the Indian English-language newspaper “The Statesman” on 22 August 1943, and those photos, which made world headlines, spurred government action, saving many lives.

I decided to bring back Jonathan Cypher and Raven to illustrate that sometimes you just have to be in the right place, at the right time, with the right skills or tools in order to be a hero.