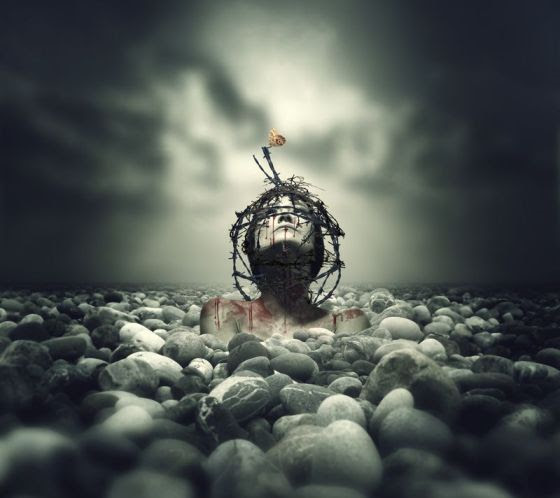 The mask of thorns was almost a part of her now, as if it were growing out of her skin instead of inexorably piercing it, boring through muscle and bone. Blood, thick as syrup, slowly described glacial paths across her face, then down her delicate throat and onto her chest and shoulders.

Julia’s body was paralyzed in a sea of stones. At first, they felt crushing, and she impotently thrashed and screamed in claustrophobic terror. Now she could barely feel them, just like the thorns, her nerves disconnecting from pain, or for that matter, from pleasure as well.

Was it irony that brought her the tiny, yellow bird, or was that Vaughn’s idea of a joke, like the parable of the Zen Monk, the Tiger, and the Strawberry? No, that’s not right. The real meaning of the parable was not to let yourself get distracted by pleasure when you need to save yourself from imminent danger.

But the bird was the only kindness in a world of horror, and trapped as she was, Julia had no hope of saving herself.

“Don’t be stupid,” chirped the bird. “Vaughn didn’t do this to you. You did.”

“What?” Blood dripped from a new cut on her lower lip as she spoke.

“You’re such a martyr, “mocked the little finch. It shook its head side-to-side in disgust and flew away.

“Wait,” she cried, but the bird heeded her not.

Then she yelled in anguish and for a moment plunged beneath the water before bobbing back up. The rocks were now ice and she was in a freezing lake. The thorn mask was covered with frost and it had begun to snow. Even if she were clothed, it wouldn’t have helped, but she was naked to the elements.

“Please.” Who was she begging to, Vaughn, the bird, or God? She didn’t know. Her body had been numb, but now the frigid pond became a fresh source of agony. However, the numbness began to return, but this time, it would bring drowning and death.

She slipped beneath the waves.

Julia surfaced amid the wreckage. There was so much floating debris, mostly refuse and the proverbial flotsam and jetsam. Had there been a boat wreck or a plane crash? Why was she in the water? There was still something on her face. It must have become attached when whatever happened, happened.

“Help. Can anyone hear me?” She grabbed onto a large piece of wood to keep her above the water. Is anybody out there?” She was surrounded by dense, gray fog.

She closed her eyes and began to sob, and when she opened them again, the bird was back.

“Have you figured it out, yet?”

“You are only where you want to be?”

“Who would want to be here?”

“Why don’t you do it yourself?”

“Are you buried in rocks or freezing in ice?”

“Good. That means you’re improving. Stop torturing yourself. The fault is not in our stars, but in ourselves.”

The bird left again, but this time Julia didn’t feel quite so alone.

The water was still there, but it was different. She was in a shower, warm water beating down on her as she was curled up on the bottom. There was blood and a razor blade. She’d cut her wrists. Where was the mask? Her face. It hurt. The razor.

She wasn’t in the water anymore. She was on a bed, but now she couldn’t move again. Who was this man?

“The restraints are just for your protection. I’m going to administer a sedative to help you get some rest.”

“The lacerations to your face were superficial and we don’t think they’ll be any scarring, but you’ll have to wear a gauze covering for a week or so.”

She felt a sting on the inside of her right elbow and moments later the world went out of focus again.

“Not in our stars, but in ourselves.”

“You’ve been saying that over and over in our sessions, Julia. What does it mean?”

The two of them were in Dr. Vaughan’s therapy room. She was sitting on a chair across from him,  a plain metal table in between. Two orderlies were standing in the back of the room.

“Yes, I recognize it. What does it mean to you?”

“It means that I’m in control of my life. No one can do anything to me that I don’t want to happen.”

“What about when you cut your wrists. Did you want that to happen?”

“I just wanted to feel alive. I was so numb. Nothing mattered, not my mother’s death, not my boyfriend leaving me. I should have been devastated, but I felt nothing. Not until I felt the pain and saw the blood.”

“Believe it or not, that revelation means you’re making progress.”

“Does that mean you can stop putting drugs in me?”

“That’s part of your treatment.”

“But they make me feel so fuzzy.”

“I’ll tell you what. If you keep progressing in your therapy as you have so far, I’ll change your medication orders.”

“I don’t need to be restrained anymore, Dr. Vaughn. I’m not going to hurt myself again. I’m through being my own worst enemy.”

The sunlight hurt Julia’s eyes for a minute as she stepped outside.

“Do you have the referral slip I gave you?”

“Yes, Dr. Vaughn. I’ll call…” she had to pull the paper out of her purse and look at it again. “…Dr. Phelps as soon as I get to my sister’s house.”

“I’m sure you’ll do fine in outpatient treatment. I wish you all the success in the world.”

“It’s time to go, Julia.” Her older sister Emily was at her side, and Emily’s husband Ron was waiting in the car.

The two briefly shook hands, and then the patient turned and walked toward the parking lot. Julia closed her eyes and turned her face up toward the sun. She basked in the warmth, and touching her cheek with her fingertips, her skin felt smooth.

Opening her eyes, she saw the tiny, yellow finch. It didn’t say a word.

I wrote this for Photo Challenge #219 hosted at Mindlovemisery’s Menagerie. The idea is to use the image above as the inspiration for crafting a poem, short story, or some other creative work.

There is no reality or plausible fantasy where the image above makes sense, so I went right to hallucination. Julia is on a psychological journey to discover better ways of conquering her depression and taking control of her life.

There really is a zen parable about a monk, a tiger, and a strawberry which you’ve no doubt heard or read, but according to another site (I can’t link to it because it runs some sort of script that locks up my browser), the real meaning of the parable is not to let yourself get distracted by pleasure when you should be saving yourself from mortal danger.

The quote from Shakespeare is from Julius Caesar, Act 1, Scene 2..

Oh, mask of thorns, crown of thorns are obvious Christ imagery, but where Christ gave his life as a symbolic sacrifice in the service of God and for the sake of redeeming humanity, Julia was just torturing herself.

5 thoughts on “When Julia Wore Her Thorns”