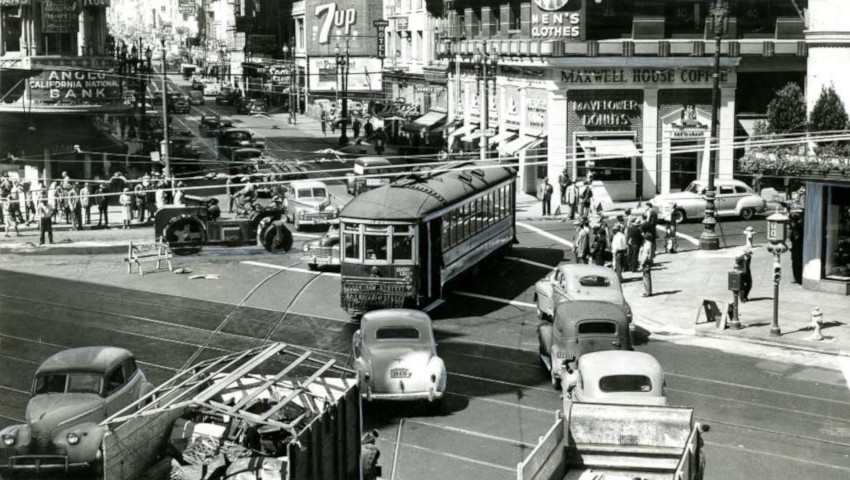 San Francisco Chronicle Archives – From the back of the photo: “F Car goes through – The two months long blockade of the Fourth and Market intersection ended completely yesterday morning as F cars moved from Fourth Street across Market into Stockton. While police officers experimented with the new traffic pattern at the complex five-way intersection, workmen rolled down the last of the fill in the project. City officials hope the revised schedule will end one or more downtown bottlenecks.” September 9, 1947.

“I keep telling you this, Marguerite, but you never listen. You are just as breakable as the next person, maybe more so given your line of work.”

Private Investigator Margurite Carter was getting sick and tired of Cohen’s lectures. “Do I tell you how to stitch a cut, Sawbones? Just do your job. I haven’t got all night for you to fix up my broken wing. And what’s that crack about me being more breakable? I’m as tough as any guy in the business.”

“Tell that to your broken arm. It’s a good thing you’re left-handed. From the way you described the thug who jumped you, he must have had a hundred pounds on you. By the way, the name’s Dr. Cohen or Joel, not Sawbones.” The fatherly doctor tightened the binding a little too much on his thirty-year-old mouthy patient just to make his point.

“If you’re expecting me to cry like some dumb dame, forget it. I don’t wither up and die just because something hurts.” She had been lying on the sofa in the dingy inner office on the second floor of the commercial building on the corner of Geary and Leavenworth. When Cohen saw her trying to sit up, he gave her a hand, half-expecting Carter to push it away. This time, though she was loath to admit it, she was hurting bad enough to let him.

“Surprised you didn’t put on some latex gloves before touching me, Doc. It’s pretty well-known you don’t like handling flails.”

“It’s called shomer negiah and it’s a form of propriety and modesty, something my Pop tried to drill into me when I was a boy. It’s good for you that I’m not so observant, though old habits sometimes come back to visit me.”

The door between the inner and outer office suddenly opened and then slammed shut, and Margurite chuckled as Joel jumped up, and then spun and went into a crouch.

“They call it shell shock. Guess it never goes away.”

“You know it’s only Preta being miffed that I got hurt again.”

“It’s why I don’t always enjoy making house calls here. How can you stand working in a haunted building?”

“You get used to it. Besides, she’s my closest friend.”

“Only you would make friends with a spirit.”

“Don’t get all riled up. You’re my next best friend besides her.”

“I can count the number of friends you have on the fingers of one hand.”

“I’ve got plenty of friends.”

“You’ve got associates and acquaintances.”

“Can I help it people don’t like a broad who’s tougher than most men?”

“Well, you’re tougher than I am at any rate.”

“Mortar fire, wasn’t it? I mean the reason you’re so jumpy.”

“That’s right. My unit was moving the medical team by truck through some sort of marsh when the Krauts opened up on us. We put them down, but not until they hit us pretty good. It’s something you never forget.”

“For me it’s closed in spaces. When I was a kid, when the old man wanted to punish me, he’d lock me in a crawl space in our cellar. Elevators are okay, but I can’t stand it if I’m in a closet and the door starts to swing shut.”

Cohen was calm enough to put the rest of his equipment back in his medical bag. “I guess that’s enough of the mournful musing for one visit. It’s after midnight and I’ve got to be getting home. First patient comes by at eight.”

“You going to have to cauterize?”

“Your sense of humor is abysmal, and no. Mrs. Kelly’s coming in for her regular prenatal check up. As for you, take a week off and then make an appointment to see me. I’ll want to check how the bone is knitting.”

“Nothing doing, Bones. If Marsden sent one of his goons to roust me, I must be getting close to proving he did it. I can’t let up now.”

The door opened and slammed again, this time hard enough to rattle the glass.

“Seems like Preta agrees with me. Take some time to rest, or next time I’ll have you admitted to County General.”

The sofa moved apparently of its own accord, causing Margurite to slip back down into a half reclined position.

“Never mind. I can sit back up myself.”

Cohen clicked shut the latch on his bag and stood. “I’ll leave you two alone to settle this.”

“And you say my sense of humor is lousy.”

“Good night, Marguerite.” He turned to go, but stopped when the windows rattled again. “You too, Preta.” Then the office door slowly creaked open by itself.

“Night, Doc. Preta says good night, too. I think she likes you.”

Joel paused for a moment, and then stepped through the doorway. The detective and her spectral companion listened as the sounds of his footsteps receding, the opening of the outer door, and then him closing it behind him. Then they were alone.

“Now don’t be this way, Preta. I know I’ve got to get some shuteye, but I’m too bushed to make it home, so the couch will do for the night. No, I’m not going to change my mind but I’m betting you will. Why? Because you’re going to help me on this one. You’ve been bothering me to let you in on one of my cases ever since I moved into this joint. Yes, I’m serious and here’s why. This time it’ll take a ghost to put away the man who murdered her.”

I wrote this for Wordle #204 hosted at Mindlovemisery’s Menagerie. The idea is to use ten of the twelve words in the “Wordle” to craft a poem, short story, or other creative work. I used all twelve. Here they are:

The words “sawbones” and “mortar” led me to write a story set in the late 1940s in San Francisco, and to create a female “Sam Spade.” It’s also a ghost story with a twist. I hope you enjoyed it.

7 thoughts on “The Haunted Detective”