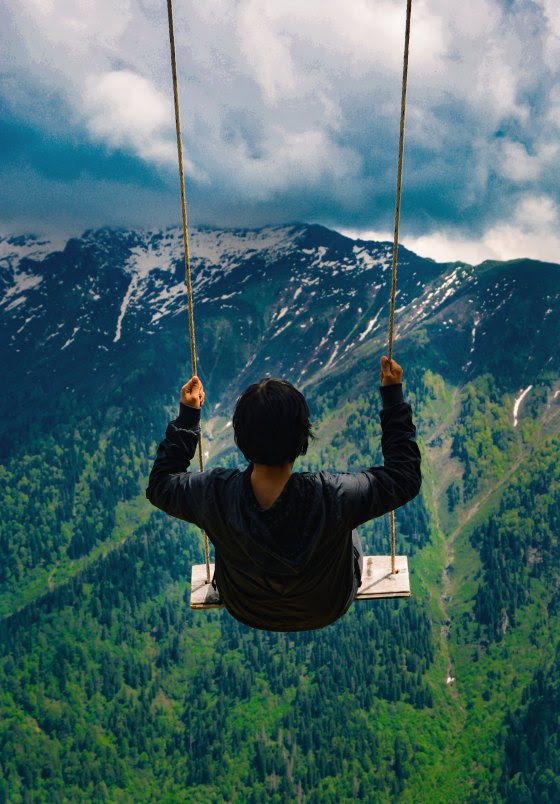 The minute Enoch Fischer noticed the boy was missing, he knew there’d be trouble, but he didn’t suspect that not only had some fool strung up a swing at the edge of the cliff, but that the fifteen-year-old would use it.

“Relax. I’m fine. Can’t I have some fun once in a while?” The boy turned his head around as far as he could, but Enoch still could hardly hear him.

“That’s not fun, it’s suicide. Get off this instant.”

“Poor choice of words on your part, Dad.” He was laughing, taunting his adoptive father the way he had since he was able to walk. At the apex of the arc out into empty air, Deric pulled himself up by the ropes, twisted, and then falling, grabbed the seat with both hands. On the return swing, his legs were low enough to drag on the dirt and grass pulling him to a stop.

“You should have seen the look on your face.” He stood and swatted dust off of his pant legs, still laughing at the effect his stunt had on the older man.

“I wish you wouldn’t do that. You’re going to give me a heart attack.”

Enoch held the boy at arm’s length. “Is that why you do these crazy things? Are you testing the limits of your abilities?”

“It’s as good enough reason as any. Hey, is there any chicken left? I’m still hungry.” He put his hand on Enoch’s shoulder and began to pull him back toward the campground.

“Wait a second. I don’t want your mother to hear this conversation.”

The teen rolled his eyes in mock exasperation. “Okay. I know you don’t want Mom to have a heart attack, either.

“Son, what if you try something like that and you’re wrong? You’re not indestructible. The broken arm you got jumping off the roof when you were five proved that. So did the accident at the skateboard park when you were seven. That earned you three cracked ribs. And how about the broken nose when…”

“I get the picture, but I was a lot younger back then. I don’t think I’ve had to visit the emergency room in what, two or three years now.”

“If you had fallen off that swing, your next stop would have been at the morgue…on a blotter.”

“How do you know I can’t fly, Pop-Pop?” He was still grinning like a maniac, but it wasn’t because he enjoyed his Dad’s worried suffering.

Enoch took a deep breath and let himself calm down. His own smile was a faint comparison to the boy’s. “I guess we’ll have to find out someday, but please, not the hard way.”

“Okay, I get the picture. I’ll try to go slower, but you know, sometimes the sky just calls to me.”

“Well let it call to you later. If all the chicken is gone, I think Mom brought some apple pie.”

“Yeah, if my two rotten little brothers haven’t devoured it by now.”

They were both laughing as the walked back down the trail to where they were picnicking.

“Vance and Nolan look up to you, and while you may be unique, they aren’t, not the way you are.”

The smile disappeared from Deric’s face. “I promise you I would never do anything to hurt them. You and Mom took me when I was abandoned by who knows who in that alleyway in Spaceport City. I owe you everything, and I will do whatever it takes to protect those boys, you, and Mom.”

“I know, son. I know.” They put their arms around each other.

“About time you two slow pokes got back. I could barely keep the other two out of the pie.”

“No more chicken, Mom?” Deric ran forward toward the rest of this family.

“These chow hounds finished it off.”

Laughing, Vance and Nolan took off running but the six and eight year old only got a few steps before Deric caught them, and then they started wrestling on the ground, giggling and playing like brothers do.

Enoch sat down beside his wife and watched, their hearts warm.

“What did he do this time?” Annabella was whispering in his ear, not knowing if it was soft enough to keep Deric from hearing.

“How much more powerful do you think he’s going to get?”

“Beats me. I’m less concerned about that than making sure he has the temperament and maturity to handle it when he finally becomes a man.”

“He’s your son and you’re a good man. With you as his Dad, how could he be anything else but like you?”

“Out there somewhere, he has another Dad and Mom who called him by another name. How could they desert a two-year-old in one of the roughest parts of our colony world’s primary city?”

“He’s our son, Enoch. He has been since before he could walk or talk. He may be from someplace else, but he belongs here with us, now.”

They were hugging when the three boys skidded to a halt in front of them.

Deric had the other two by their arms, all of them covered in dirt and grinning. “Now what about that pie, Mom?”

“Hold your horses. Go to the restroom and wash up, first. You’re all filthy.”

“Race you.” Deric took off like a speeding bullet. His younger brothers didn’t have a prayer of keeping up, but they tried anyway.”

Enoch and Annabella watched them go, and like all parents, mused what they’d be like when they grew up. But they especially wondered about Deric.

I wrote this for Photo Challenge #222 hosted at Mindlovemisery’s Menagerie. Every Tuesday, the challenge is to use the image provided to craft a poem, short story, or some other creative work.

When I saw the picture of someone swinging out over eternity, my first reaction, was “No, just no.” Then I thought about my own daredevil son when he was a teen. No, he wasn’t nearly as bad as Deric, but I’m sure I’ve got a few gray hairs because of him.

No doubt you saw the parallels to the “Superman” story, but I made a few twists, including them living on a colony planet and little “Deric” being found near a spaceport, where presumably various alien races and other strange influences could be encountered.

One thought on “Going Up”