Who knew the first movie I’d see in the theater since Rise of Skywalker (2019) would be DC League of Super-Pets (2022). Let me explain.

My son and his wife went on a camping trip, so they dropped my seven-year-old granddaughter off at my wife’s and my house at 9:30 Saturday morning. My wife suggested we go see a movie together. After searching for what was available for kids, I wanted to see Minions: The Rise of Gru (2022). She’d already seen it but hadn’t seen the Super-Pets movie yet. Of the two, I knew “Minions” had better reviews, but what the heck?

As far as my overall impression of “Super-Pets,” let’s just say it was fun for seven-year-olds.

Actually, in many ways, it was pretty standard fare for a “buddy” movie. You have two buddies, in this case Superman (voiced by John Krasinski) and Krypto (voiced by Dwayne Johnson) and then a woman, Lois Lane (voiced by Olivia Wilde) gets in the way. Krypto gets jealous and that’s what causes all of the problems.

END_OF_DOCUMENT_TOKEN_TO_BE_REPLACED

I haven’t posted anything in the political or social realm on this blog in a while. I became aware that sort of content was costing me readers, both here and probably with my stories. It’s even possible (and likely) that publishers considering my short story submissions have given me a hard pass because they looked me up on twitter and Facebook. I guess the dictionary definition of “inclusive” isn’t being considered.

But then on twitter, I read an article tweeted by Bounding into Comics called Superman’s New Enemy Is Fake News, YouTube’s Yellow Flash Shares His Thoughts.

For those of you who don’t know, Clark Kent and Lois Lane married in the comic books and (amazingly considering Clark is from another planet) had a son. He was named Jonathan after Clark’s (adopted) Dad, which is totally cool. The readers were given a good look at the Kents as parents and wow, what a great set of parents. However, the writers at DC Comics decided they had plans for little Jon and couldn’t wait years for him to grow up the old fashioned way. So they trapped him in another universe and he grew into a teenager just like that.

END_OF_DOCUMENT_TOKEN_TO_BE_REPLACED

Doc Savage and his oddly assorted team might be considered the progenitors of today’s “Fantastic Four” and many other teams of superheroes — even Sgt. Fury and his Howling Commandos.” -Stan Lee, creator of Marvel Comics’ “Spider-Man” and “The X-Men”

There are probably two reasons to read pulp fiction that’s 70, 80, 90, and even 100 years old. The first is that you’re a true fan of the genre. The second is, if not for these ancient heroes, we wouldn’t have the modern ones that, at least up until recently, were box office blockbusters at the movies.

In the mid-1960s as I was about to enter Junior High, I didn’t realize these stories existed and more, I didn’t know that various publishers had finally convinced the owners of these older properties to allow them to appear as paperbacks. It was the perfect time for me. I was the age and sex of the target audience, and the average price for a paperback was around 40 to 60 cents a copy. Heck, back then, even a comic book cost 12 cents.

So Edgar Rice Burroughs’ entire Tarzan and John Carter of Mars book series abruptly appeared in mall bookstores all across the country. So did E.E. “Doc” Smith’s Lensman and Skylark series along with what Robert E. Howard and every other author under the sun wrote about Conan the Barbarian.

END_OF_DOCUMENT_TOKEN_TO_BE_REPLACED

First of all, let me say that I haven’t seen any of the WandaVision mini-series and don’t anticipate watching this new show either. It’s not that I think they’ll be bad or I won’t enjoy them. I just don’t subscribe to streaming services. Well, besides that, I don’t have the time to dedicate myself to television shows anymore.

I used to watch all of the WB produced superhero shows, popularly known as the Arrowverse, but they were consuming so much of my free time, I didn’t have any left for things like writing and a life.

END_OF_DOCUMENT_TOKEN_TO_BE_REPLACED

What happened to the Man of Tomorrow? (Photo by Rodin Eckenroth/Getty Images)Getty Images

Just finished reading an interesting article at Forbes called DC Films Still Doesn’t Know What To Do With Superman. Apparently, the relatively recent successes of Wonder Woman, Aquaman, and now Joker haven’t rubbed off on the Man of Steel.

But the future of Superman is murky, the studio reportedly unsure how to make the character “relevant to modern audiences.”

Like my previous commentaries on Captain America and particularly my two on Superman, HERE and HERE, he appeals to audiences across time because his values are timeless. How does “timeless” ever become irrelevant?

END_OF_DOCUMENT_TOKEN_TO_BE_REPLACED

Screenshot of the cover of the graphic novel “Superman Smashes the Klan” found at Polygon.com

I know I’ve been booted out as a follower of Mike Glyer’s fanzine File 770, but he can’t block my internet access, so occasionally I pop over to see what’s up. Most of the time it’s “not much,” but I did happen upon Pixel Scroll 10/23/19 The Little Green Man Was Very Sad, One Pixel Was All He Had.

Item 11 is titled SUPE’S AN IMMIGRANT, TOO. It links to an article where a 1946 version of Superman fights Nazis, the Ku Klux Klan, and befriends a Chinese immigrant family. I was all prepared for yet another reinvention of Superman who behaves like a 2019 progressive over 70 years in the past. That is to say, out of character and historically anachronistic.

And yet the Polygon article The Superman story that set the Ku Klux Klan back years is now a comic was a pleasant surprise.

A few days ago, I wrote Truth, Justice, and the American Way to illustrate how classic superheroes such as Superman and Captain America represented, not necessarily the United States as it is or historically has been, but as we want to be as a country and a people, a united people.

END_OF_DOCUMENT_TOKEN_TO_BE_REPLACED

“What the hell?” Sixty-two year old millionaire Warren Hollister stared down the long gully carved in his quarry terminating at an unconscious man being put on a wheeled gurney by ambulance attendants.

“It’s like I was saying. Thought he was dead, but when I checked, he was breathing,” gasped Jake Fischer, the Foreman.

“Not a scratch on him.” Hollister shook his head in wonder.

“What are you suggesting?.”

“Who knows what happened? Last year the Russkies sent up Sputnik, and today, a man falls from the sky.”

I authored this for the Rochelle Wisoff-Fields flash fiction writing challenge. The idea is to use the image above as the prompt for crafting a piece of flash fiction no more than 100 words long. My word count is 98.

This is actually part of a story that’s been floating around my head for years, the idea that a mysterious man can fall from the sky and into the hands of what could be a ruthless millionaire. Since Jake mentions that Sputnik was put in orbit the previous year, that puts my story in 1958, just over 60 years ago.

I got the scene for my rock quarry from this news story and very loosely based it on the 1953 “Adventures of Superman” television show episode Panic in the Sky (video).

The minute Enoch Fischer noticed the boy was missing, he knew there’d be trouble, but he didn’t suspect that not only had some fool strung up a swing at the edge of the cliff, but that the fifteen-year-old would use it.

“Relax. I’m fine. Can’t I have some fun once in a while?” The boy turned his head around as far as he could, but Enoch still could hardly hear him.

“That’s not fun, it’s suicide. Get off this instant.”

“Poor choice of words on your part, Dad.” He was laughing, taunting his adoptive father the way he had since he was able to walk. At the apex of the arc out into empty air, Deric pulled himself up by the ropes, twisted, and then falling, grabbed the seat with both hands. On the return swing, his legs were low enough to drag on the dirt and grass pulling him to a stop.

“You should have seen the look on your face.” He stood and swatted dust off of his pant legs, still laughing at the effect his stunt had on the older man.

END_OF_DOCUMENT_TOKEN_TO_BE_REPLACED 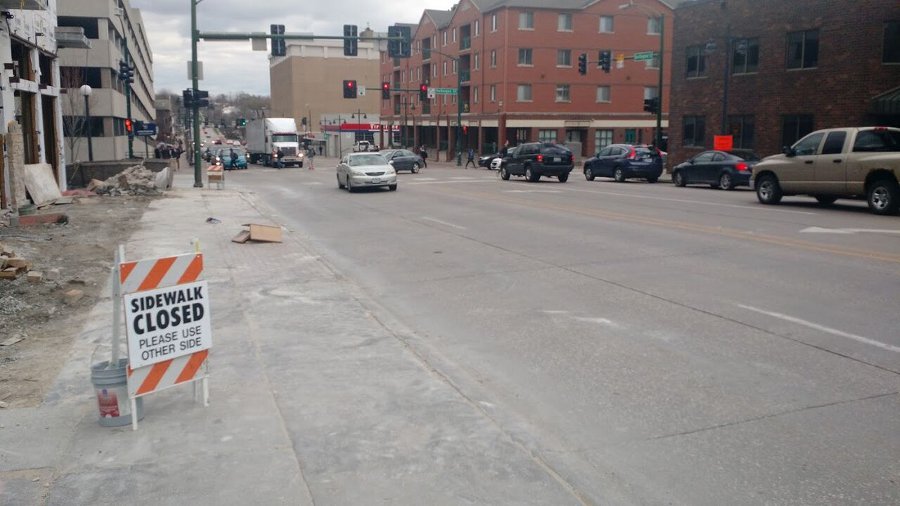 The young reporter stood at one end of a torn up sidewalk in the heart of his home town. The place was going through growing pains again as city workers discovered it was worth a longer commute from rural towns in exchange for affordable housing, a lower crime rate, and cleaner air. There were times when Clark wished he could move back here too, but his career kept him in the midst of the city, the world really.

He tried to come back once a month to visit Ma, but as always, he’d never be able to stay long. He had his job to think about, and then of course he had his other job that was continually demanding his time and effort. He was fine with the fact that the world would always need Superman. Sometimes though, he wished they’d let him have just a few days so he could have the freedom to visit Ma and to be just a country boy who was raised in Smallville.

I wrote this for the Sunday Photo Fictioner photo writing challenge. The idea is to use the image above to inspire crafting a piece of flash fiction no more than 200 words long. My word count is 169.

This photo looked like a small, rural town being forced to grow to accommodate an influx of commuters. There are plenty of places like that near where I live in Boise, Idaho. But a growing town doesn’t sound particularly exciting, at least to me, unless you consider that just like any small town kid, sometimes Clark Kent wants to hang up his cape for a few days and go home to visit his Ma.