Found at Mindslovemisery’s Menagerie – No image credit given

25 year old Brian Russell saw the pile of junk mail sitting on his chair which was situated near his gaming console. “I thought I told you to throw away the snail mail crap.”

His roommate and fellow graduate student Ricky Briggs shook his head, wagging his long pony tail as he continued to focus on playing Warthunder. “One of them wasn’t junk. Check out the first class stamp.”

“Only you would know about postage stamps, you throwback.” The tall man ran his fingers through his mop of “dishwater” brown hair. He actually admired Ricky’s talent for “old school,” but didn’t always appreciate it. Picking up the envelope, he still knew enough to realize that no return address was unusual. Brian ripped open the gaily yellow envelope and found a single card inside with the words, “You’re Invited Grartor Party Saturday Next” printed on it.

“Who wrote this, an ESL dropout?”

Brian remembered too late that Ricky’s Mom was an immigrant from Argentina. “Sorry man.”

“Forget it, you ignorant white prick.” Ricky really didn’t care what Brian said. He just liked yanking at his latent liberal guilt of a pampered college boy with moneyed parents. Antagonizing each other was a defining characteristic of their friendship.

“What the hell is a grartor party?”

“Do I look like Google to you?” They’d carried on this entire conversation while Ricky was still gaming, a talent they both possessed with their PCs situated so they were back to back when they were playing.

“Fine.” Brian went into the kitchen and pulled a beer out of the fridge. Taking a swig, he sat back down at his computer, logged in and tried to Google “grartor” and “grator party.” All he came up with was some obscure reference on Roblox.

Then he picked up the now empty envelope. No return address, nothing else inside. Setting it down, he looked at the card again, then flipped it over. “Hey, there’s an address and a time. Says 11 p.m.”

“Thrilled,” came the dry response from behind him.

Brian typed the address into Google and came up with the name of an apartment complex. Then he used Google maps. “The address is downtown.”

For once, Ricky didn’t say anything, but Brian heard the frantic “clicky-clack” of keys being rapidly punched.

“Busy.” Ricky must have hit a new level at the game and was trying not to die.

“Downtown high-rise apartment building with a basement. Hell, why not?”

Russell found himself standing in front a apartment complex on South Grand Avenue between 2nd and 3rd streets at 10:59 p.m. He walked into the very posh lobby and saw a gaunt old man sitting behind the front desk. This was the sort of place his parents rented condos at when they vacationed in Aspen, Cabo, and Aruba.

The man, who looked even crazier and older than that “Heaven’s Gate” guy, looked up with an expression of complete boredom and extended his arm out to the right. “Go that way. Last door on the right.”

“Uh, thanks.” Brian pocketed the invitation and followed directions. He came to an elevator that looked like it was recently installed. It didn’t match the bank of similar units behind him. There was one button, a down arrow. He pushed it and it illuminated. The usual humming sound came from below as the car rose to his level. It opened and he stepped in. Again, only one button, another down arrow.

“How am I supposed to get back up?”

He was about to push it when he heard, “Wait.”

A girl who looked Mexican-American was running toward him. “Hold it a second.” She couldn’t have been more than twenty or so. Rushing in, she smiled. “Thanks.” Brian saw she had an invitation identical to his clutched in her left hand.

“No problem.” He smiled back and pressed the down button. She was cute, maybe five foot four, olive skin, dark brown hair which matched her eyes, wearing jeans, and a black T-shirt with green text saying “The Matrix Has You” on the front, complete with the code. It was bent all out of shape by her large, rounded breasts, which his gaze lingered upon.

“Do you know what this is all about?” Her question caught him off guard and he looked up at her face.

“No. I just got this invitation in the mail the other day. What’s a grartor party?”

She shoved her invitation into her jeans pocket just as the doors opened.

“A parking garage?” Brian’s mouth dropped open as he looked into the dimly lit expanse.

“We’ve been had. Let’s get out of here.” Brian turned and pressed the button again, but this time, it didn’t illuminate and the doors stayed open.

“I don’t know. There’s no up button, no emergency alarm, no phone. What kind of elevator is this?”

Before she could answer, a loud siren screamed at them from the car’s ceiling, deafening them. Reflexively the pair ran out of the elevator and into the darkness. Immediately the alarm shut off and the doors slammed shut.

“Wait!” She turned and ran back, pounding her fists against the steel doors. “Come back.”

“There is no button.”

He looked and saw that she was right. There was a light above the doors but nothing else around it. Just a concrete wall. “There’s got to be another way out.”

“Alright, what sort of game are you playing?” She had her back pressed against the elevator doors, arms at her side with fists clenched.

“There’s no one else here.”

“Look, I’m just as much in the dark as you are. Here’s my invitation. I got one the same as you.” He produced the card from his back pocket.

“Because I’m the girl and I can’t beat and rape you.”

“You’re kidding, right? If I were a stalker, do you think I’d go through all this trouble? What about the person at the front desk, and whoever heard of an elevator like that one?”

“Shall we play a game?” The voice came from out of the darkness and the distance of the expanse. He sounded playful with a hint of menace.

Brian wheeled around and stood next to his unwilling companion, his back to the wall. “Who said that?”

“Don’t you like to play games, Brian? I know Essie does.”

“Essie?” Brian looked at her again.

“Why are we here? What do you want?” Brian cried out into the darkness. 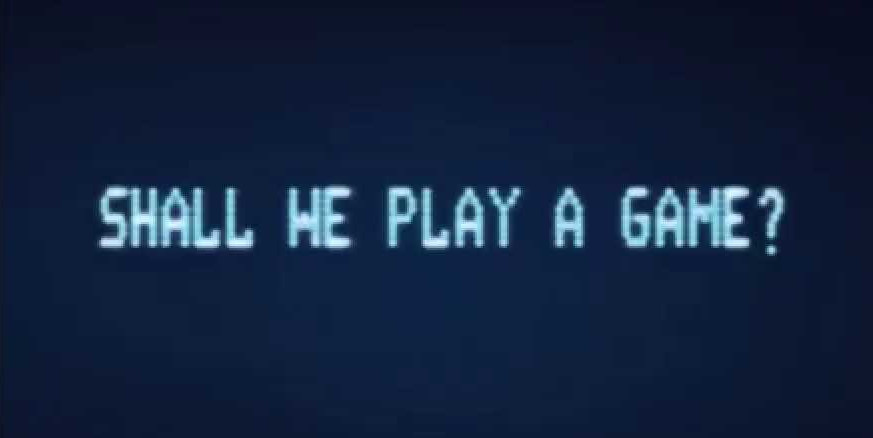 “We don’t like this game. Let us out.” Essie took Brian’s hand and then let go like it was a snake.

“Oh, my dear. You’ve been playing this game for a long time now. Do you really think this place is real anymore than your invitations?”

“What are you talking about?”

“You don’t remember. I suppose that’s to be expected. A side effect of the VI.”

“On VI?” Brian interrupted her. “My Master’s Thesis in engineering…Oh crap. The Experiment.”

“I volunteered…wait. I know you. You did set this up.” Essie edged away from him.

“Not me. My study group was one of six assigned to develop a VI system so we could interact in a…”

“Virtual reality,” she finished his sentence.

“Professor Ingram?” Brian squinted into the dim illumination at what he assumed was the far end of the garage.

“Not precisely. He programmed me with himself in mind, but I assure you that I am completely autonomous.”

“There were eight of us who went into the VI.” Essie took a step away from the elevator.

“That’s right. Me, the other six graduate students…”

“And two undergraduate volunteers. I was one of them.”

“I don’t remember what we’re supposed to do next.” Brian put his hand on his head, lowered it, and then looked up. “Where are the others?” He was yelling now, as if the voice might not hear him.

“Play the game, Brian. You and Essie shall play a game with me. If you’re good enough, you find the other six. If you win, you’ll even be able to get out of here.”

“What if we lose?” Essie asked a question dreading the answer.

“What happens to anyone who loses?”

“The game is over and the simulation stops.” Brian had written that part of the program.

“But the characters die.”

“We’re not characters. We’re people.” Essie touched Brian’s forearm, but this time kept her hand there, needing the reassurance that he was real.

“We’ll die?” Essie began to tremble, and Brian could feel her hand shake. He took her hand and held it.

There was a growling off to their left, then the sound of footsteps, or were they paws? A soft metallic sound drew their attention to their feet. They saw ammo belts with holsters containing handguns, and then a pair of assault rifles that weren’t there a second ago.

“If you do nothing, they’ll find you and kill you. If you play the game, you’ll have a chance of survival.

“Come on.” She reached down and grabbed both belts, holding one out to Brian. He looked puzzled and took a step back. “What? I grew up on a farm. My Papa taught me how to shoot.”

“I’ve never touched a gun in my life.”

“Those things are getting closer, so you better get used to it.”

He grabbed the belt and put it on. By the time he was done, she handed him one of the rifles.

With both of them armed, Essie pulled on his arm. “This way. We can’t let them catch us.”

“Right.” He tried remembering everything he could about first person shooters. He’d programmed this game the same way, so he knew the rules. “Let’s go.”

Together, Essie and Brian entered the unknown, and the game officially began.

I wrote this for Tale Weaver – #183 – Making Sense of Nonsense – Grartor hosted at Mindlovemisery’s Menagerie. The idea is to use the invitation “”You’re Invited Grartor Party Saturday Next” as the prompt for crafting a poem, short story, or other creative work.

There are a couple of links in the body of the story which were my efforts to research “grartor,” which suggested some sort of game. From there, I took elements from a few movies to create the beginning of what obviously is a much larger tale. I hope Brian and Essie make it.

Oh, the high-rise apartment building really exists, but I don’t know if it has a mysterious parking garage or not.