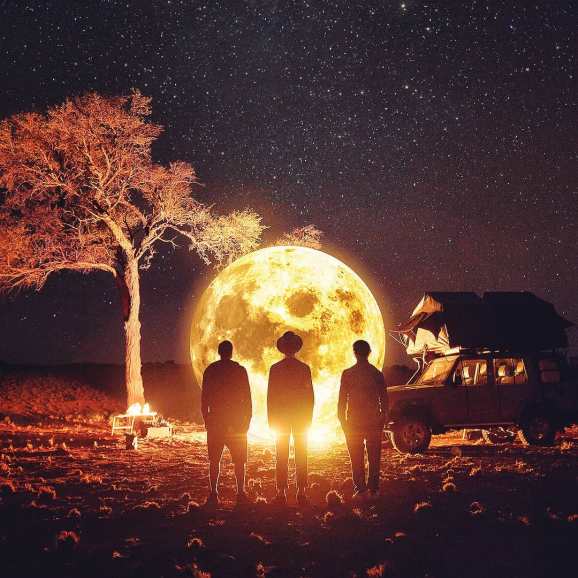 It happened just that fast. One moment, the three brothers, having just reloaded their Celestron NexStar telescope back in the camper, were about to put out their campfire and call it a night, and the next they were facing the phenomenon.

“This couldn’t be because we’ve been observing the object.” Forty-five year old Jake was the oldest and the first to get the amateur astronomy bug when he was in high school. “I mean, it’s not that close.”

“Not yet, but…” Terry forgot what he was about to say at that moment as he continued to stare at the glowing sphere. At thirty-nine, he was the “baby” of the family, but also the only one whose marriage lasted.

“But nothing. It’s got to be from the object.” Stan worked as a chemical engineer, so was the brother who came closest to being a professional scientist.

“From its location in the sky and its heading, it came in from above the plain of the solar system and has steadily been decelerating.” Jake adjusted his hat, standing in between his siblings. “It’s been steadily heading toward us and it was a miracle we found it before anyone else. Heck, I haven’t wanted to report it to CBAT because they’d think we’d lost our minds. But how can this be from it?”

“The thing looks like the Moon, At its current velocity, the object will reach the Moon or cross its orbit in another day or less.”

“Do you think that’s its destination, Stan?”

“You’re right. It’s rotating.” Jake took Terry’s arm and gently pulled him back in line next to him.”

“Apparent size is constant, but the view is magnifying.” Unlike Terry, Stan walked several steps forward. “This is the far side of the Moon. What’s that on the surface?” He took a pad and pen from his shirt pocket and started jotting down the rough coordinates.

“A base. Spaceships.” Terry trembled with excitement. “I think this is telling us the object’s destination.”

“Then it is a space craft, an extraterrestrial vessel.” Stan finished his notes as the image froze at an apparent height of half a kilometer above the lunar surface. “Should we still notify CBAT, or maybe NASA, or even the Pentagon. We certainly have enough photographic evidence, and this cinches it.”

“Damn! My camera.” Jake spun and made a run for the truck but when his hand touched the door handle, he heard a loud pop behind him, and the light became noticeable dimmer. Turning back, he saw his brothers, stark disappointment written on their faces. The globe vanished as abruptly as it had appeared.

“Well, now what?” Terry waved his arms toward their dying fire.

“We get in range of cell coverage and call someone.” Stan reached for his hip pocket reassuring himself that his phone was still there. Feeling it vibrate, he pulled it out. “I thought you said we didn’t have coverage here.”

“We don’t.” Jake rejoined the other two.

“Then why am I getting a call? Caller ID blocked. What he heck.” He accepted the call and raised the phone to his ear. “Hello?”

After a moment, something that sounded like a crude voice simulator spoke back. “Greetings-this-is-your-visitor-speaking-we-have-an-invitation-for-you.”

“What the…” Stan pulled the phone away from his ear and put the speaker on.

The call was abruptly dropped. “A journey?”

“I’ve got a hunch I know what it means.” Jake put his hands on each brother’s shoulder.

“Yeah, that it’s an elaborate hoax and someone’s pulling our leg.”

“I don’t think so, Terry. I looked at the phone during the call. There was no cell signal registering and there still isn’t.”

Terry turned to an excited Jake. “So, what’s your hunch?”

“I think we’re going to the Moon tomorrow night.”

I wrote this for the #230 Photo Challenge hosted at Mindlovemisery’s Menagerie. The idea is to craft a poem, short story, or other creative work based on the image prompt.

I had a tough time with this one, but eventually settled on the current theme. Actually, my first thought was to make the globe into an alien weapon of mass destruction the extraterrestrials were testing in the desert before conquering Earth, but at the last second, I decided to make them (hopefully) friendly.

Would you accept this invitation?

Oh, I had to look up their telescope, where you report a comet discovery to (CBAT stands for Central Bureau for Astronomical Telegrams), and find out the radio delay between Earth and the Moon which is 1.25 seconds.

8 thoughts on “The Visitor’s Invitation”