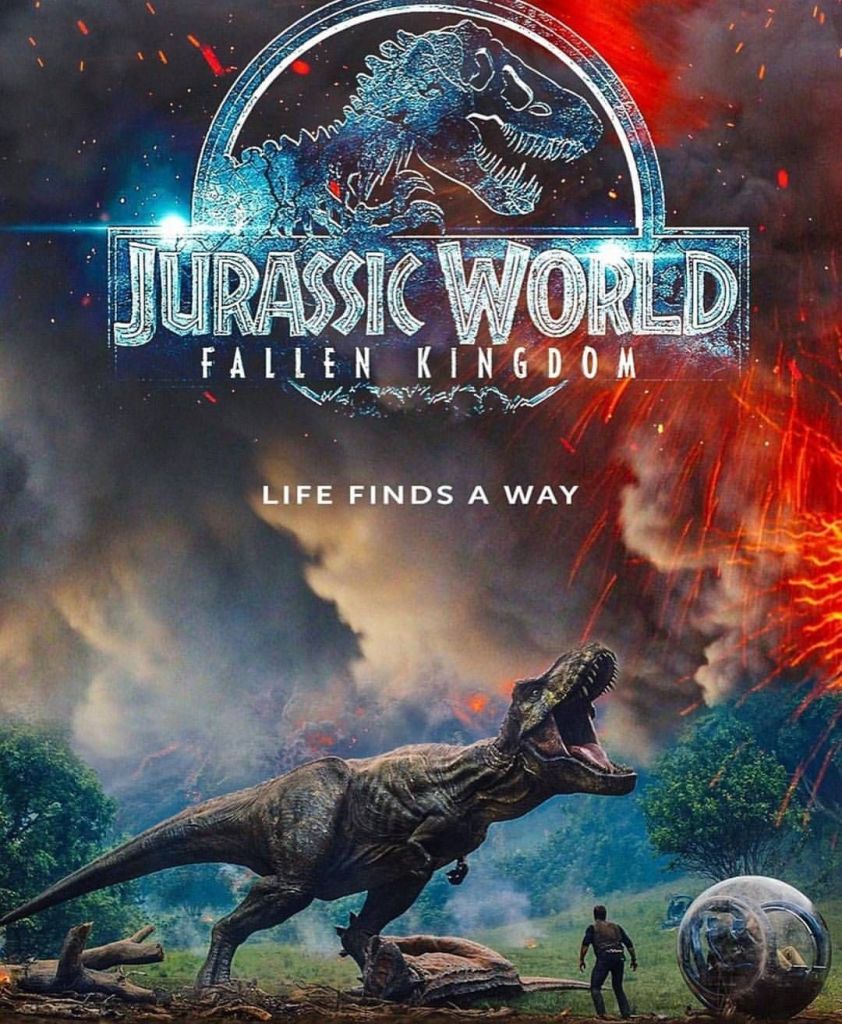 I’ve seen the original Jurassic World (2015) once, as well as all of the other “Jurassic” movies on various occasions, and when I saw the DVD for Jurassic World: Fallen Kingdom (2018) at my local public library, I couldn’t resist. I enjoyed Chris Pratt’s and Bryce Dallas Howard’s work in the first film, and was hoping they could “do magic” again. They didn’t disappoint.

In some ways, this movie pulled from the very first Jurassic Park (1993), particularly with Jeff Goldblum reprising his role as Ian Malcolm, and mentioning how Hammond (Richard Attenborough) started the whole project (twenty-five years ago, my how time flies), although the eccentric genius in this movie is a wheelchair bound Benjamin Lockwood (James Cromwell).

At the end of the previous film, people had to leave the island of Isla Nublar because all of the dinosaurs had escaped and were killing everyone. Now, amid a secret plot to use the surviving dinosaurs and their DNA for nefarious purposes, Claire Dearing (Howard) must convince Owen Grady (Pratt) to join a small team of experts in their attempt to evacuate the island of the animals, since its long dormant volcano has decided to inconveniently come back to life.

Lockwood bankrolls the expedition under the supervision of his “heir-apparent” Eli Mills (Rafe Spall), but our team of heroes, rounded out by plucky biologist Zia Rodriquez (Daniella Pineda) and often terrified IT expert Franklin Webb (Justice Smith) must infiltrate the army of Mills’ thugs, lead by the “great white hunter” Ken Wheatley (Ted Levine) to discover where the dinosaurs are really going to be relocated (not the sanctuary island the innocent Lockwood had planned) and why.

While all of the action is taking place, we become acquainted with Lockwood’s granddaughter Maisie (Isabella Sermon) and her governess Iris (Geraldine Chaplin), and it took me about two seconds to realize (spoiler alert) that Maisie is really a clone of Lockwood’s deceased daughter, which the child eventually discovers to her horror.

As it turns out, the dinos are taken to a subterranean holding area underneath Lockwood’s vast estate in Northern California (watch out Governor Gavin Newsom) to be sold to the highest bidder by the wonderfully villainous Mr. Eversoll (Toby Jones). Mills suffocates Lockwood and uses Eversoll to gather together the wealthy scum of the Earth, selling off the dinos, and making untold millions. Naturally, the original scientist who created this mess in the first place, Dr. Wu (B.D Wong reprising his role) manufactures a new and improved killing dino, which gets loose and menaces our heroes.

Grady does have a reunion with Blue, the only survivor of his trained velociraptors, but while Blue remembers Grady and even protects him, the raptor doesn’t seem to trust him anymore, and by the end of the film, Blue goes his own way rather than be caged again.

The movie pulls back and forth between trying to save the dinosaurs because they are, after all, an endangered species, and trying to kill them because humanity violated the natural order, and at least some of the saurians are dangerous predators, including Blue.

There’s tons of dino-driven action, an exploding volcano, danger, thrills, chills, and general skullduggery, but in the end, the good guys win and the bad guys get eaten.

But there’s a twist.

Maisie’s tender governess Iris is fired by Mills after Lockwood’s death, which is good, since she leaves the estate and isn’t present for the dino-fest. Dearing is faced with letting the dinosaurs escape into the “wilds” of California or letting them die by a poison gas leak, and when Grady tells her “this isn’t an island,” she relents and decides to allow them to perish.

However Maisie, realizing she’s a clone just like the dinos, opens the gates and frees them all. After the climax, we see Grady and Dearing driving across a desert somewhere with Maisie in the backseat (with Lockwood and Mills dead, the child should be a ward of the state, and we have no idea where Iris went). At the beginning of the movie, Dearing found Owen building a cabin in the woods somewhere, but now the trio are nowhere near that location. I suppose it will be up to the next movie to determine their fate.

Malcolm, in his testimony before Congress, says that they now live in a world where human beings and dinosaurs must co-exist, a “Neo-Jurassic Age,” which is where the movie leaves us. In the final scenes, dinosaurs are seen in the wilderness and at the edges of urban areas, while in a post-credits scene, pteranodons are seen flying over the Las Vegas strip (I didn’t see it, but I read that’s what happens).

All in all, this was a very fun ride, predictable in parts, but the ending was a blast. The third installment in the series should show us the world Ian Malcolm predicts, and it’s just a matter of how quickly the dinosaurs can reproduce that will determine which species, them or us, will be predominant on this planet.