Yes, this is Ben Shapiro appearing with one of his quotes. Don’t panic.

Relax. The point of this blog post isn’t to say that climate change is a hoax or to deny that it’s possible for human beings to damage the environment in any manner. The point is that when you want to convince someone of something, the way NOT to do it is to appeal to their “feels,” at least not when your point is supposed to be based on observable data and repeatable results from scientific experiments.

Case in point: climate change. The most liberal member of my immediate family, one of my sons, says that it’s possible for what we are currently observing to be “human assisted” climate change. He’s pretty smart and reads a lot (okay, reading and podcasts), so even though we don’t always agree, I can depend on him to present his point of view logically.

Now relative to climate change, he agrees with me that it’s not like the Earth has never been hotter than it is right now.  For instance, during the Cretaceous Period, according to LiveScience.com:

The world was a warmer place during the Cretaceous period. The poles were cooler than the lower latitudes, but “overall things were warmer,” Kruk told Live Science. Fossils of tropical plants and ferns support this idea, she said.

Interestingly enough, even though climate pundits are saying that if the Earth gets much hotter, humans will go extinct, at least according to answers provided by Reddit and Quora, human beings would be able to adapt to the warmer climate and higher levels of atmospheric Carbon Dioxide.

But none of this is my point.

I started on this track this morning by reading Climate Science’s Myth-Buster: It’s time to be scientific about global warming, says climatologist Judith Curry and Why Renewables Can’t Save the Planet by Michael Shellenberger. The Shellenberger article was especially compelling because he is an environmentalist who has spent decades promoting “green” solutions in California. His conclusion isn’t that we don’t need better, cleaner ways to generate electricity, but that these renewable methods are a lot more expensive and really ineffective.

In other words, he presented a rational argument based on information and not his feelings or his biases. As someone who has spent so much time in support of renewables, you’d expect him to defend their use, not to criticize their practicality. 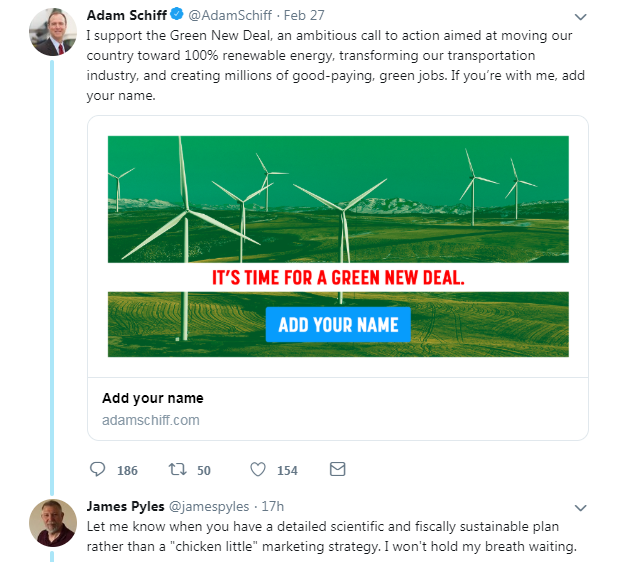 I certainly don’t think, having read it, that the Green New Deal being proposed, even when “explained” by Vox, is practical, let alone that it will create the shiny utopia suggested by Congressman Schiff, Representative Alexandria Ocasio-Cortez and others.

However, since I responded, both to a tweet by bestselling science fiction writer Neal Asher and to Schiff’s tweet, things started to get interesting 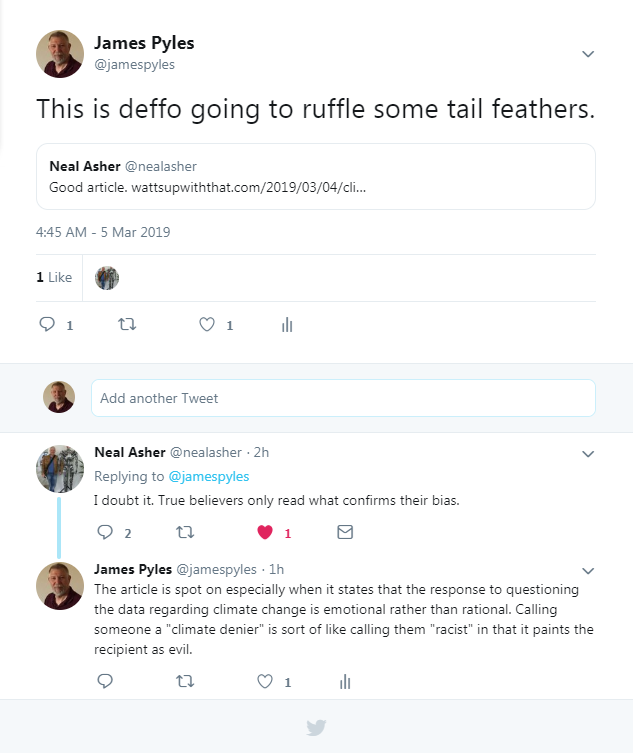 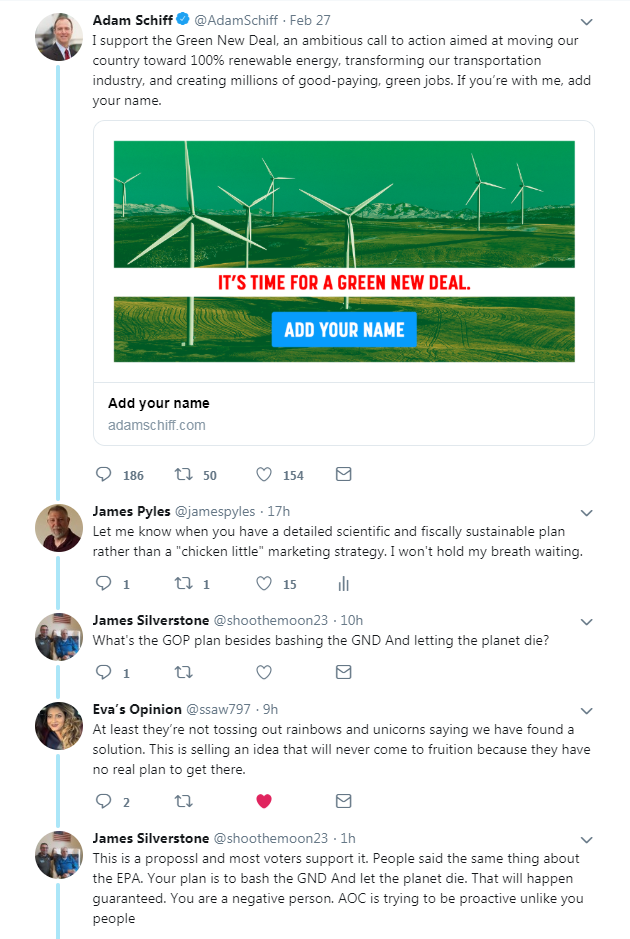 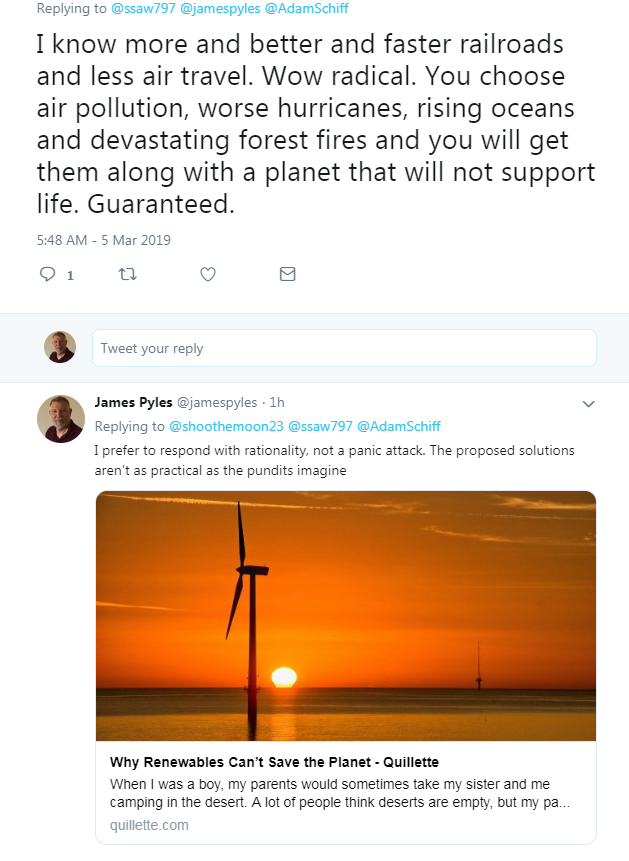 As you can see James Silverstone, or @shoothemoon23, has some very emotional things to say about my rather flip response to Congressman Schiff. The fact that Mr. Silverstone is a manager in Wildland Fire Management only came up after his emotional “appeal” for me to accept Schiff’s and Ocasio-Cortez’s so-called “solution.”

I know twitter is a very poor forum for a rational conversation given its character limitations. The number of characters is just long enough to provide for snappy and sarcastic comments and the occasional URL. No one’s mind is ever changed by an argument on social media, and I’d be foolish to believe otherwise.

Now, for a related question, the answer to which doesn’t fit well on twitter. What is science? According to ScienceCouncil.org:

Part of the definition presented at Understanding Science is:

Science is ongoing. Science is continually refining and expanding our knowledge of the universe, and as it does, it leads to new questions for future investigation. Science will never be “finished.”

…a principle or set of principles laid down by an authority as incontrovertibly true.

However, whenever the topic of climate change comes up in social media, the response to any question is, “Trust me, I’m an expert.”

If climate change does affect every human being on the planet, then as a human being, I should be able to ask questions about it and even express rational skepticism about proposed solutions. I’m not going to respond well to a politician telling me “Sit down, shut up, and give me all your money. Trust me, I’m a politician.”

I can be convinced by a rational, reasonable argument if it’s backed up by evidence. That said, I am very aware that scientifically gathered data can be manipulated to say all kinds of different things. There’s a reason Huff’s How to Lie with Statistics has been a popular text for decades. Also, Nobel prize-winning economist Ronald H. Coase is quoted as saying:

“If you torture the data long enough, it will confess to anything.”

So even if you say “I am a scientist” and “Here’s a summary of my data,” I might ask a few questions because of the above. If you propose a set of solutions, especially if they are grandiose solutions, such as replacing all domestic air travel with high-speed trains in the next twelve years, that is, by the year 2031 (along with changing a whole bunch of other things), I might be a bit skeptical because there are tons of questions associated with that statement (Where does the energy for the trains come from? Do they run on existing track? How “high” is “high-speed?” Are there any exceptions allowing for domestic air travel, such as for politicians and celebrities? and so on).

Also, according to at least one data source, the United States’ carbon dioxide production from fossil fuel-burning, though still high, is declining, while China’s is way, way higher, and both India and Japan both are increasing production, though at significantly lower levels. In other words, we’re not the only “bad guy.”

So I intend to keep reading and having rational discussions with people who want to discuss rather than simply emote and instigate panic. Yes, if there’s a significant problem with the environment, it needs more than study, it needs to be addressed, and the only thing people can change is their/our own behavior. On the global scale, that’s a lot to change, but I suppose we can start in our own backyard, so to speak. However, I’ll need something a little more solid to hang onto than what I see being proposed so far, especially if the solution proposers are going to be putting their hands in my pockets so they can pay for it all.

2 thoughts on “Using Climate Change to Illustrate Debates Based on Data vs. “Feels””