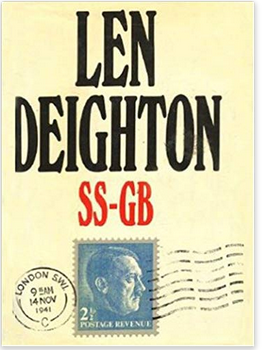 Disclosure: I checked the hardback copy of this novel out from the public library.

Just finished Len Deighton’s 1978 alternative history novel SS-GB: Nazi-Occupied Britain 1941. I recall reading it decades ago, but remembered almost none of the content.

This isn’t actually science fiction, just a sort of “What if Nazi Germany won World War 2 and occupied Great Britain?” The tale centers around Scotland Yard Inspector Douglas Archer, a well-educated man who is fluent in German and works with the SS who have headed up Britain’s police agencies. He seems to get along with his superiors, unlike his partner, Sgt Detective Harry Woods, and many other of the nation’s beleaguered citizens, who chafe at the occupation.

While investigating was started out as a murder, Archer is plunged into a world of political intrigue, conspiracy, and assassination. It only gets worse when SS Standertenfuhrer Huth arrives from Berlin to supervise the investigation. Only then, does he learn the Germany’s secret atomic weapons development project is headquartered in Britain, and the dead man was a nuclear scientist. He also falls into a plot to free the King of England from imprisonment and clandestinely transport him to America, which has remained carefully neutral during the war.

With a female American reporter and a small collection of resistance fighters from Britain’s social elite, Archer must decide where his loyalties lie.

The book is very intricate, occasionally plodding along among its many details. Then about two-thirds of the way through, a literal explosion launches the action into high-speed. Now its a race against time, with Archer facing murder and attempted murder, and uncertain who, if anyone, he can trust.

Deighton keeps the reader guessing until the very last moment, about how events will play out, if Archer’s collaborators among the resistance are traitors, or if his German allies, who are all playing each other in a game of control, will save him or sacrifice him.

Yes, the book begins slow, but I think that was Deighton carefully laying the foundation for what was to follow. I can’t say that the novel has a happy ending or a sad one. It’s just an ending which leaves the reader dangling from the last several, astonishing plot twists.